I have plenty I want to say about Paddleton, but I’m struggling to know how to start, or how to give the right impression of this brave and funny film. Paddleton itself has lots to say, particularly about death, friendship and how we choose to spend our time. See! I’m telling it like it is, but hardly selling it. Bear with me and I’ll give it another try.

Plotwise, Paddleton is very simple: it presents a friendship between Mike and Andy during the weeks following Mike’s terminal cancer diagnosis. Mike is played by Mark Duplass (Safety Not Guaranteed) and Andy by Ray Romano (Everybody Loves Raymond), and the two have been best mates since becoming neighbors in a small apartment block several years earlier. We don’t see much of their lives beyond the periods they spend together, as best buds: they hang out, make pizzas, play paddleton and watch their (fictitious) favorite Kung Fu film, Death Punch. Andy has a problem with small talk; Mike has a bit of an issue with being alone; they understand each other, though, as only close friends can.

I wanted to watch Paddleton since I heard that it features Mark Duplass, an incredibly talented actor and writer. Duplass co-wrote Creep (my favorite found-footage film) and starred in it as Josef, who invited a videographer to film him for a day because he said he didn’t have long to live. So when his character in Paddleton declared he had cancer, and “there’s nothing they can do”, it was difficult to know whether to believe him at first. And this is where Duplass’s talent shows: whether playing a mischievous murderer or an everyday sad bloke with an illness, his character is utterly believable. His characters in both films had quite different personalities (unlike so many other actors – even some big stars – who seem to play the same personality every time): watching Creep, I could tell that nothing Josef said could be taken for granted; whereas watching Paddleton, I could tell Mike was being honest all the way. He didn’t necessarily say how he was feeling, but it was visible. I genuinely felt for him: the man knew he was dying, and wanted to really own that process.

I felt for Andy, too: his best mate was not going to be around much longer, and he is obliged to follow Mike’s journey to the end, without any input; indeed, without anyone even asking how he is. I’m not familiar with Ray Romano, as I am with Mark Duplass, and I found him to be very impressive: like Duplass his acting was endearing and naturalistic; his character’s personality more introverted. When he was sure about his views, he spoke clearly; the rest of the time, he was hesitant, as though he wasn’t quite sure of his place to speak. And what place would he have without his friend?

Both the main cast played their parts with delicacy and care. The characters themselves were as real as fictitious characters can be (actually, as real as the people in The Florida Project), which I’m sure came from a blend of the writing and acting. I’m not sure if it was, but Paddleton had the feel of a semi-improvised film, with conversations meandering as they do in real life. It had a very loose structure, almost casual, with one scene following another when it got round to it… or as the end came closer, when it was obliged to, and not before.

Interestingly, both the writers had another role each: Mark Duplass played the central character, and Alex Lehmann directed the film. Thus, the writing, portrayal, development, and presentation of the characters were well knitted together. Romano’s Andy was of course somewhat separate from that, as his character was external to the main crisis of the story. 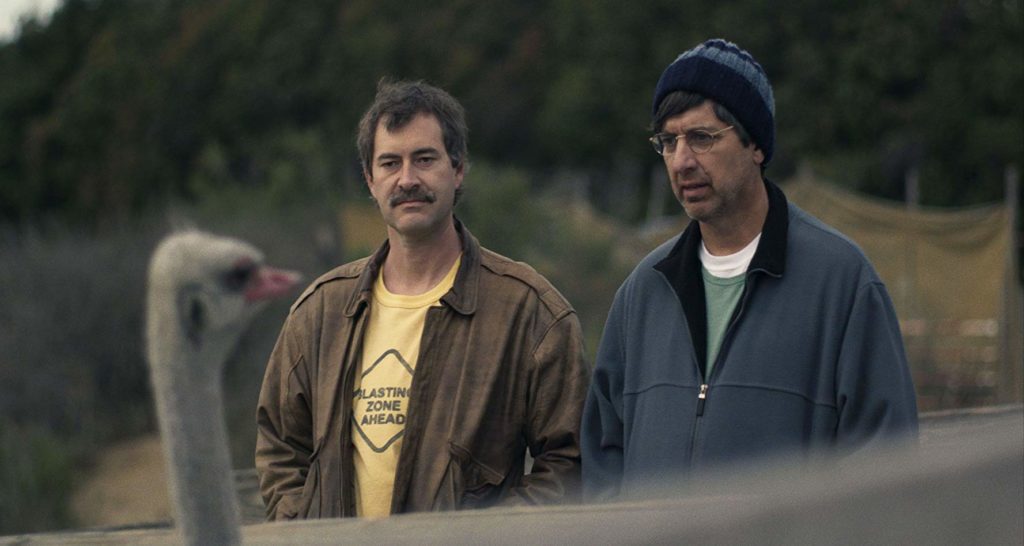 What would you do if you found out you were not going to live much longer? What would you do if your best friend told you they were going to die? Personally, I don’t want to even think about it – I haven’t got a friend like Andy to share my last breaths with – but Paddleton does provide a possible approach. It may not be ideal (some aspects are not well thought through), and at no point does the script tell us this is the best approach, but it’s utterly plausible.

I hadn’t come across this until watching Paddleton, but there is a legal concept in the USA known as “Death with Dignity” (legal in just a few states), whereby a doctor can issue a prescription to terminally ill patients which enables them to take control of their own ending. I wonder whether Paddleton was written in reaction to these laws, or if it was simply used as a device for exploring the nature of friendship: either way, there is an immense amount of food for thought in these ninety laidback minutes.

This all sounds kind of serious, and I said it was funny earlier: it is! It is funny like life is, like real people are; with gentle, understated humor. The tone is very similar to that of BBC’s The Detectorists, though with an extra melancholy hue.

As well as all the plus points above, Paddleton was beautifully made: there is just enough made of the apartments to support our getting to know the characters; there are occasional close-up views of the friends’ expressive faces, but not enough to get cheesy, or spell out what’s on their minds. The camera work was sharp and bright, especially in the few outdoor scenes; and in clear contrast with the retro – almost Wuxia – filming style of the few Death Punch scenes specially made for this film. Also worth mentioning is the occasional contemplative music, from Julian Wass: again, not overdone, or sentimental; just enough to take the friends’ journey forward a little when needed. Producers Mel Eslyn, Alana Carithers and Sean Bradley should be proud.

Paddleton is the first of four films from Duplass Brothers Productions which will be distributed by Netflix worldwide. “Turns out when you make films for Netflix, millions of people all over the world watch them. This is not a terrible thing for an independent filmmaker,” said the Duplass brothers, when the deal was announced last year. I do hope millions watch Paddleton: it’s simply lovely, which is something I never would have expected to say in relation to a film about death and friendship.