“Rocky 8” served no real bite, but it did offer the usual routine of being a lawyer for the characters, while Louis Litt sweats over his new role.

“Rocky 8” served no real bite, but it did offer the usual routine of being a lawyer for the characters, while Louis Litt sweats over his new role.


This recap of Suits Season 8, Episode 11, “Rocky 8, contains spoilers. You can check out our thoughts on the previous episode by clicking these words.

To my surprise, Suits returns, so I hastily opened up Netflix to watch Episode 11, “Rocky 8”, which is obviously related to the boxing series. Harvey (Harvey Specter) has a knack for making cultural references in nearly every episode, which was born with his back and forth with Mike, but this time his movie reference was a direct hit on one of his cases.

Harvey wants revenge on Andrew Malik (Usman Ally), the Deputy Attorney General for the State of New York who cost Jessica her lawyer status in the mid-season finale. It turns out Malik is accusing a boxer of fixing the match, with a knockout looking suspicious, with the opponent supposedly diving to the floor. Harvey wants to not only prove Malik wrong but publically humiliate him.

“Rocky 8” tends to bring things back to normal in Suits, but the glaring difference is that Louis Litt (Rick Hoffman) is now the Managing Partner. I cannot believe this day has come. His thirst for power was the premise nearly every season, but the one time the character does not seriously want it, due to life commitments, he gets the role. It’s amusing to see the bumbling character dance around the office floors, feeling that he runs the place; he does. 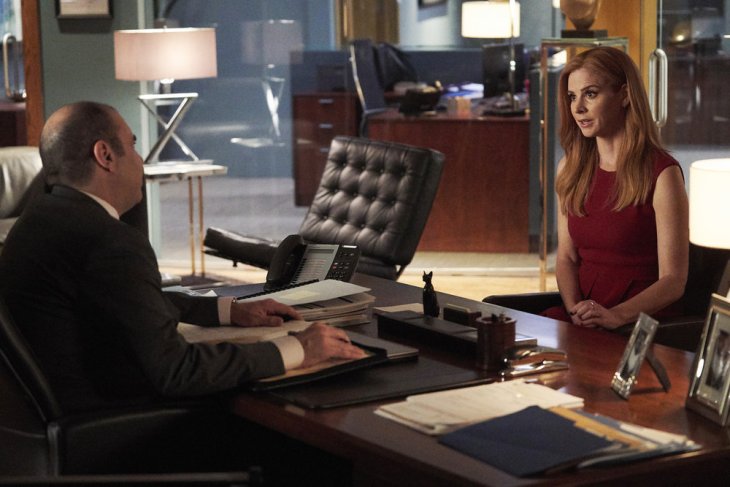 And that’s the problem. “Rocky 8” shows Louis struggling to give up his routine work and steer the company. His favorite client comes knocking, and rather than delegating it to Alex Williams (Dulé Hill) he wants to do the job himself. Of course, Donna Paulsen (Sarah Rafferty) the COO/Problem-fixer explains to Louis that he needs to change his tact.

Katrina Bennett (Amanda Schull) has Samantha Wheeler (Katherine Heigl) breathing down her neck in “Rocky 8”, due to the antics which helped Alex in the previous episode. Samantha is fuming in how Katrina secured the data which compromised one of her clients. Samantha seems to like trouble; she either instigates it or wants to fix it – either way she’s an intriguing character.

In the end, Harvey resolves the boxing case, along with Robert Zane (Wendell Pierce) while cueing in references about Rocky and Apollo and at the same time, forcing Malik to issue a public apology; technically the attorney was right, but in true Harvey fashion he gets his opponent’s balls twisted in the law. Louis eventually starts steering the company, after Donna has her grandstand moment, explaining that he’s doing it wrong and Katrina stands up to Samantha and Alex, making her case that she will be an outstanding lawyer.

All was well in the latest episode, which was mainly amusing due to Louis and his inability to adjust, but interestingly Donna has found herself a love-interest, which will inevitably mean Donna-Harvey 4.0 will be born – will them two ever confess their honest feelings? Well, “Rocky 8” did not provide the answer, in what was a normal-ish episode.