Nightflyers is appreciative of “The Sacred Gift”, which delivers a creepy side story and takes some interesting character turns on the way.

Nightflyers is appreciative of “The Sacred Gift”, which delivers a creepy side story and takes some interesting character turns on the way.

This recap of Nightflyers Episode 6, “The Sacred Gift”, contains spoilers. You can check out our thoughts on the previous episode by clicking these words.

As the saying goes, in space nobody sleeps well, least of all Thale (Sam Strike), whose peculiarly vivid dreams in “The Sacred Gift” include him being sliced open and lovingly smeared in his own blood by a group of scruffy, chanting women. We’ve all been there.

Meanwhile, Lommie (Maya Eshet) is still patching up the Nightflyer’s systems, which shouldn’t be necessary since Cynthia (Josette Simon) was banished into perpetual parental abuse in the previous episode. This is obviously a bit confusing for the innately suspicious Karl (Eoin Macken), but I assume it’s a slightly more positive development for Auggie (Brian F. O’Byrne), whose questionable relationship with the late Mrs. Eris is gradually becoming clearer.

But there are more pressing concerns in “The Sacred Gift”, including an errant vessel, the Eagle-16, which has been drifting listlessly in space for the last 14 years since a previous deep-space exploration project that obviously didn’t yield favourable results. Since the ship is on the same trajectory as the Nightflyer and has roughly the same design, Karl decides that a smart course of action would be to hop aboard and swap out the crystal matrices, leaving Cynthia alone and harmless and the Nightflyer’s crew able to continue their mission. Captain Eris’s (David Ajala) pathetic objections that “she’ll be alone” don’t hold much weight, so Melantha (Jodie Turner-Smith), Rowan (Angus Sampson), Lommie, Auggie and Karl all suit up and hop aboard the Eagle. 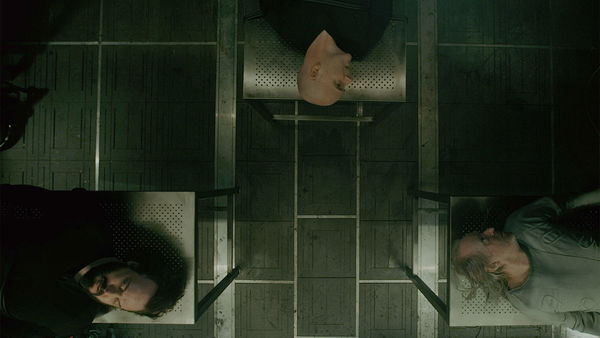 In a truly unexpected turn of events, the Eagle is buggered. The air is breathable, but there’s blood everywhere, other clear signs of a fight, and the ship is populated seemingly exclusively by dishevelled women who strongly resemble those imagined by Thale in the opening sequence. Wonderful! One of the women is a renowned scientist, Constance Brighthead (Olwen Fouéré), who invented a lot of the genetic modifications that Melantha currently enjoys, and is seen among the women – all, apparently, scientists themselves – as a minor intellectual deity, thus temporarily obscuring the fact that she’s clearly evil, as we will discover promptly.

Lommie is deeply suspicious of these chicks, as since they grow their own food and avoid using the ship’s technology, they remind her of the weird Luddite commune she was raised in. (Earlier in “The Perfect Gift” we were shown a device aboard the Nightflyer that fabricates food to absurdly precise specifications; later, Constance moans about how much energy such a thing consumes.) She and Auggie discuss this briefly as they schlep around looking for the crystal matrix, while Auggie insists that Cynthia isn’t so bad – which is probably why he smashes the Eagle’s unused matrix right before he’s accosted by the women, whom video evidence suggests might have fudged the details a wee bit when they explained what happened to their ship.

Things take a rapid turn for the worse, as Auggie and Rowan are knocked out and kidnapped just in time for Constance to reveal that she has been growing human meat for long-term sustenance. Luckily Lommie is on-hand to save everyone by getting stab-happy with shards of the crystal matrix, and the Nightflyer crew are able to give it legs back to the relative safety of their own ship. I say “relative safety” with absurdly sarcastic elaborate scare quotes, just in case that didn’t come across well written down.

Now we’ve more or less reached the end of “The Perfect Gift”, let us briefly take an account of all the weird and worrying s**t currently occurring aboard the Nightflyer, for the sake of posterity, if nothing else. Auggie lies to Roy about the state of the Eagle’s crystal matrix, and for some reason isn’t contradicted by Lommie, and he continues to conduct a private relationship with Cynthia, referring to her as “the real Captain Eris” while Roy impotently gawps at the lit-up crystal over his bed. Ominous! Thale, meanwhile, has telepathically observed the events aboard the Eagle to much bleeding of the eyes, and he insists that things aren’t going to get any better. And speaking of bloody peepers, Karl and Agatha are enjoying the no-pants-dance when Karl’s own eyes spontaneously start trickling blood. Uh-oh! Turns out Agatha hasn’t been entirely honest about her own telepathic abilities. That’s what happens when you f**k around with your ex, Karl. Never ends well.