Hackneyed, unfunny and painfully mundane, Ken Jeong: You Complete Me, Ho is a tedious Netflix stand-up special that fails to offer any insight into the man behind the stereotype.

Hackneyed, unfunny and painfully mundane, Ken Jeong: You Complete Me, Ho is a tedious Netflix stand-up special that fails to offer any insight into the man behind the stereotype.

It’s rare to come across a stand-up special that is somehow less funny than spending the equivalent amount of time feeding your hands into a belt sander, but then there is Ken Jeong: You Complete Me, Ho, the return to stand-up comedy of the doctor-turned-comedian-turned-actor-turned-comedian-again who shot to stereotype stardom after his breakout role as Leslie Chow in the Hangover series.

In a tortuously unfunny hour-long set, Jeong essentially plays the exaggerated Asian stereotype that rocketed him to global success in the first place – although he does take the time to unsatisfactorily address how much hate that performance earned him from the Asian community in a go-nowhere bit that fails to make any kind of point. He talks about his small dick and his funnily-named Asian wife, and naturally he indulges in the same kind of hackneyed self-aggrandisement that all comics lean on whenever they enjoy some Hollywood success. He recites his catchphrases and re-enacts his dopey dance moves, and reflexively wheels out his perceived shortcomings as a way of saying, “Yes, I know this is played-out, and that’s the joke!” 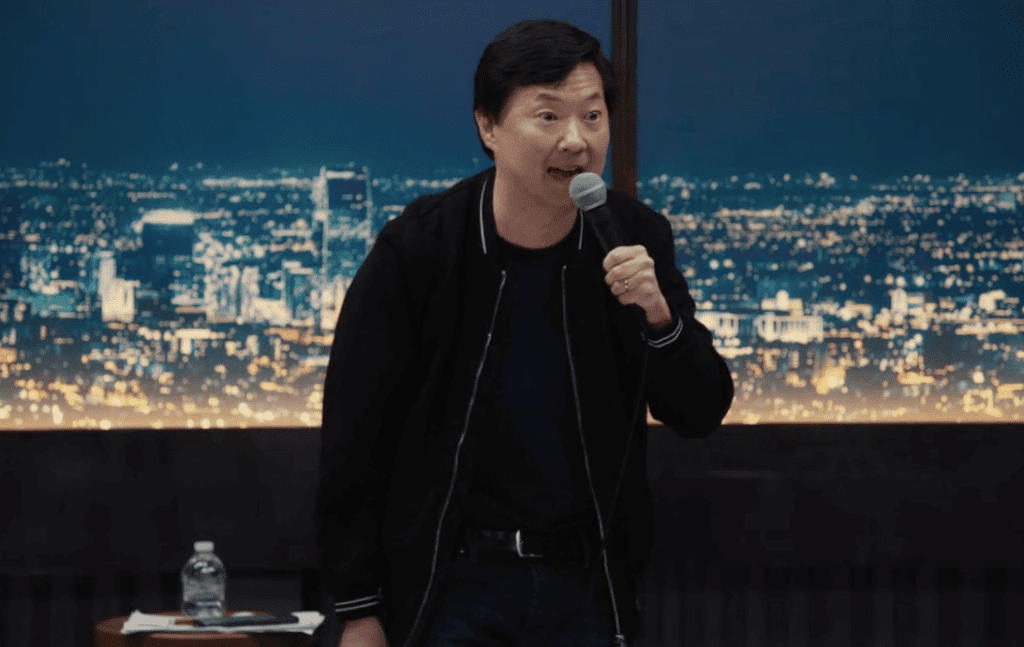 But is it, really? It certainly isn’t a funny one. I’m personally in the minority in that I believe poking fun at stereotypes can be very funny if it’s done with intelligence and finesse, but You Complete Me, Ho doesn’t have either of those things. I find Jeong’s rapper-like gesticulating and constant f*****g this and f*****g that to be indescribably grating, and so try-hard that it’s distracting from whatever insight there is to be found in his actual material, which admittedly is very little. But the overall impression is of a character playing a character; not only do I not know where Ken Jeong ends and Leslie Chow-style pastiche begins, I don’t know if, at this point, there’s even a distinction to be made.

Ken Jeong: You Complete Me, Ho is directed by Jon M. Chu of Crazy Rich Asians, which he starred in, but most of the material makes reference to The Hangover, which is still his best and most notable role. Some of the behind-the-scenes stories he tells about that film are highlights of the set, and the story of his wife surviving breast cancer is the closest any of it comes to actual authenticity – both moments that, I’m sure you’ve noticed, aren’t written jokes, but real-life stories. There’s a clear disconnect between the performative version of Jeong and whatever semblance of a real person exists beneath it all; the former is insufferable, but the latter is strangely likeable and compelling, which is how he found such a devoted audience in the first place. Unfortunately, You Complete Me, Ho, feels no different from one of Jeong’s movie roles: A hokey, lazy trudge through well-worn material.