If you didn’t know in advance, you’d be forgiven for not realizing that Epix’s new series Pennyworth is even remotely related to the long-running and widely-beloved Batman mythos. Well, there are some giveaways. The name Alfred Pennyworth is synonymous with the Caped Crusader, after all, his faithful butler and confidante, and Thomas Wayne, Bruce’s father, is as integral a part of the World’s Greatest Detective’s origin as anything else. But Pennyworth Season 1, Episode 1, which you can watch on Epix right now ahead of its official premiere this Sunday, July 28, has very little concern with what you think you already know about its characters. In fact, this is a newer, darker interpretation that feels completely apart from what is happening with DC’s properties in other corners of the streaming universe, from Titans to Doom Patrol to Swamp Thing, not to mention Shazam!.

The DC Universe is doing interesting things, then, on its own platform, on the big screen, and now on Epix, which seems like an odd place for such a prominent spin-off as Pennyworth. But maybe that’s fitting for a show that clearly wants to strike out in its own direction, not entirely free of associations to a broader franchise, but not entirely defined by them, either — Marvel did the same thing with Agent Carter, and anyone who saw that show knew how much of a travesty it was that more people didn’t. 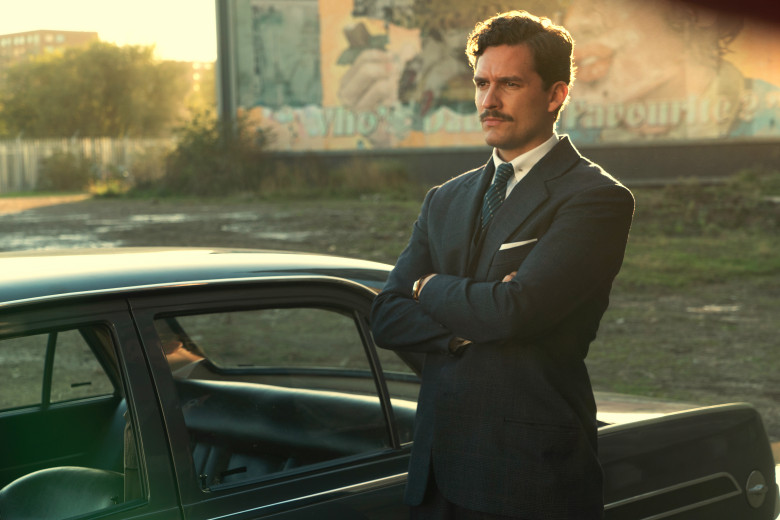 In the lengthy Pennyworth Episode 1, Alfred is played by Jack Bannon, reimagined as a kind of working-class Cockney herbert, similar to his portrayal in Gotham, working as a nightclub bouncer and budding “security consultant” in a post-war London with an obviously fake skyline choked by green smog. There’s a class undercurrent as Alfred struggles to readjust to life outside of the SAS; his own father (Ian Puleston-Davies), fittingly a butler, believes he should take up a respectable position as someone’s footman, and disapproves of his upper-crust actor love interest Esmé (Emma Corrin). Elsewhere, Bet Sykes, a snarling Northern henchwoman played by singer-songwriter Paloma Faith, makes regular snapping remarks about the rich and powerful — odd, considering she’s muscle for a toff secret society with parliamentary connections known as the Raven Society.

Much of Pennyworth Season 1, Episode 1 is devoted to Esmé’s kidnapping by that very same society, in the hopes of using her as leverage against Alfred so he’ll turn over Thomas Wayne (Ben Aldridge), an enigmatic American businessman who wants to employ Alfred as his long-term security consultant. That’ll be where most of the show’s serialization comes from, as the macro plotting of the Raven Society — really only seen in Pennyworth Episode 1 as Bet and her snooty handler Lord Harwood (Jason Flemyng) — simmers away in the background.

And perhaps surprisingly, Pennyworth is excellent. It’s snappily-written and stylish, paced and plotted well, and feels like its building on established mythology without constantly, tortuously referring back to it. Paloma Faith is an early stand-out among a cast that strikes the right notes at virtually every turn, and the show’s action, while relatively infrequent, feels suitably brutal and exciting. If we must learn the history of Batman’s most faithful ally, then — thus far, anyway — I’m glad this is the version of it we’re going to get.