Marc Cherry’s new well-cast dark comedy Why Women Kill is sometimes funny and sometimes flirts with deeper, better ideas, but it mostly just feels like a dated pastiche of audacious nighttime soaps about upper-class women and their various marital tribulations. This new show is ambitious enough to divide itself among three couples in three parallel timelines, but it isn’t quite clever enough for its cliched characterizations to make the point they’re trying to. Not in the first episode, anyway, though perhaps that’s asking a bit much.

That premiere, “Murder Means Never Having To Say You’re Sorry”, introduces us to the couples and their various issues, while planting seeds that at some point these women are going to kill these men. The exact circumstances in which that might happen are still unknown, but I can’t be the only viewer who found myself wishing they’d all just kill each other. 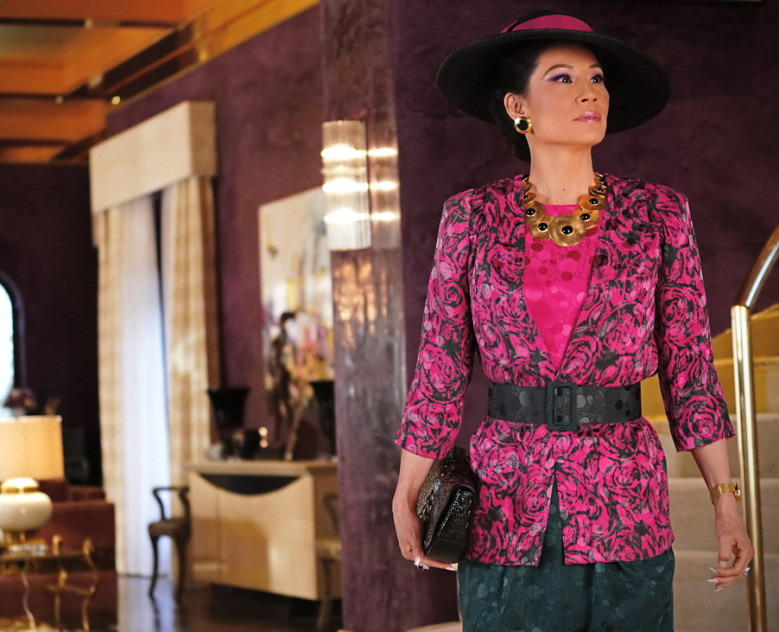 In the 1960s, frumpy ginger housewife Beth Ann (Ginnifer Goodwin) meets the hilariously-accented New Yorker neighbors Sheila (Alicia Coppola) and Leo (Adam Ferrara) and is promptly informed that her rocket-engineer husband, Rob (Sam Jaeger), a caricature of midcentury sexism, is having an affair with a pretty blonde waitress. In the 1980s, Lucy Liu’s Simone — a clear highlight in “Murder Means Never Having To Say You’re Sorry” — discovers that her extravagant socialite lifestyle is threatened by the revelation that her husband is gay, and in the here and now the equally detestable Eli (Scott Reid) and Taylor (Kirby Howell-Baptiste) struggle with boundaries as their hip open marriage begins to include Taylor’s lesbian squeeze, Jade, played by Alexandra Daddario on absolutely dynamite homewrecker form.

Of all these couples and their radically-changing attitudes, Beth Ann is the most sympathetic, in part because she’s the most cartoonish. She’s played as a broad buttoned-up stereotype forced to navigate the usual obstacles; her husband is the most obviously despicable, she isn’t traditionally attractive, and so on, and so forth. Eli and Taylor are easily the most grating with their performatively woke Millenial quirks and obvious gender-role inversion — he’s a layabout once-successful screenwriter, while she’s a go-getter power attorney. With Wanderlust and now this, it’s becoming increasingly obvious that making an audience care about an open marriage being threatened is quite a difficult thing to do.

By far the most entertaining part of “Murder Means Never Having To Say You’re Sorry” is Lucy Liu, who is delivering a kind of weaponized cattiness that provides the most cutting and the funniest lines by quite a margin. Her lavish backdrop is also the most interesting, even if I did quite enjoy the facsimile of 60s suburbia that Why Women Kill builds to torment Beth Ann. But the show, thus far anyway, is a tepid affair, full of the same-old motivations for murder without any of the actual murder. Perhaps it’ll improve, but with this setup, one has to wonder how much room for improvement there is here.