Home » Streaming Service » Netflix » Bard of Blood Recap: Getting Out Of The Country

Bard of Blood Recap: Getting Out Of The Country

“When Sorrows Come They Come Not Single Spies But In Battalions” gets the team together, as a hostage meets an unfortunate end.

“When Sorrows Come They Come Not Single Spies But In Battalions” gets the team together, as a hostage meets an unfortunate end.


This recap of Bard of Blood Season 1, Episode 2, “When Sorrows Come, They Come Not Single Spies, But In Battalions”, contains spoilers. You can check out our spoiler-free season review by clicking these words, and our thoughts on the previous episode by clicking these ones.

Following on directly from the previous episode’s cliffhanger ending, Kabir (Emraan Hashmi) begins Bard of Blood Episode 2, “When Sorrows Come, They Come Not Single Spies, But In Battalions”, still pottering around the home of Sadiq Sheikh (Rajit Kapur), who has been cruelly assassinated midway through a crossword puzzle. His computer hard drive has also been wiped, meaning whatever information he was decrypting from the USB drive is either gone or, more likely, missing. Kabir is arrested at the scene, which leads to a hilarious interrogation with a rookie agent whom Kabir has his way with thanks to his long-time espionage experience and laidback macho posturing expertise. He’s released.

In Balochistan, Aftab Khalid (Asheish Nijhawan), second in command of the Taliban, admonishes his men for needlessly torturing the captured Indian agents. In the background, children happily run through the complex as though they’re skipping through school corridors, which is the kind of mundane background detail that helps to make organizations like the Taliban that much scarier. Mullah Khalid (Danish Husain) explains briefly to Shehzad (Jaideep Ahlawat) how Aftab, his son, will make a fine leader under his guidance.

Kabir’s phone is full of videos of Vikram’s kid, according to IIW analyst Nihar, but nothing suspect. It is returned to him at Sadiq’s funeral, but a suspicious figure snapping photographs of him gets Kabir’s attention. He gives chase but the individual is able to escape. Shortly afterwards he runs into Isha (Sobhita Dhulipala) and drops her a code for a meeting place; that she was aware of it verified that Sadiq trusted her more than he trusted the agency, and Kabir, short of friends, can trust her too. He gives Isha the number that he believes was used to transfer the data from Sadiq’s hard drive, which she’s able to trace with the (unwitting) help of Nihar. Kabir and Isha follow the phone to a squalid hideout that contains the attire of the sneaky funeral photographer. Kabir explains to Isha the three-man off-the-books mission proposed to him by Sadiq and reveals that moments before his death he was writing letters in Sudoku squares. Three of them pertain to him. But three others, RLB, are mysterious; Isha explains that if she was ever to be sent on a mission, her planned codename would be Rani Laxmi Bai. Looks like Sadiq wanted her in Balochistan. 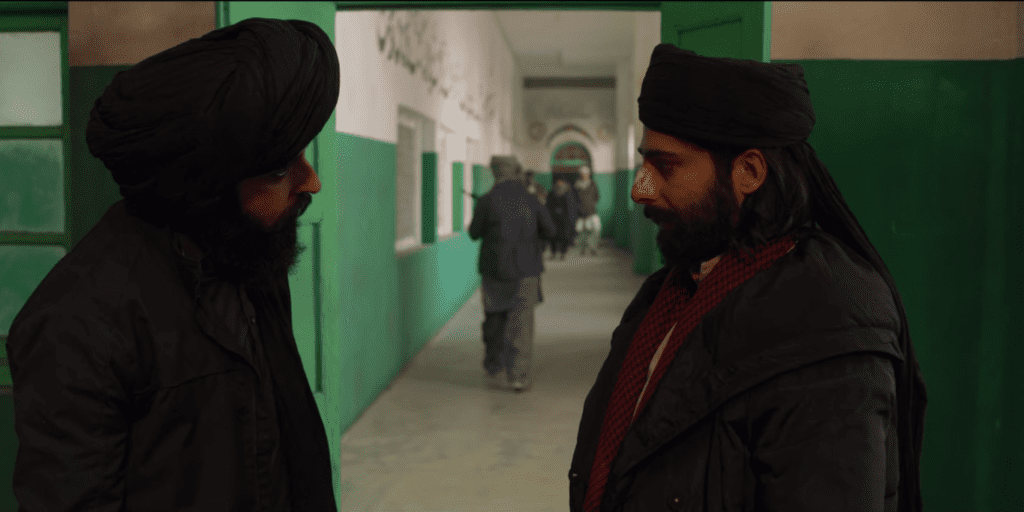 Kabir and Isha determine that they need to find “X”, the third agent indicated in Sadiq’s Sudoku scribbling. He must be someone almost forgotten by the agency and turns out to be undercover sleeper agent Veer Singh (Viineet Kumar Singh), whom Bard of Blood Episode 2 introduces as he smuggles heroin through a checkpoint in Afghanistan with an accomplice he’s forced to kill after receiving a call from Isha. It’s his first contact from the agency in over a year. She tells him that he is being given a break, and that after completing this one small job will be free to go home. I’m sure that will come back to bite her later.

That shootout is intercut with a disturbing scene in Quetta, where Aftab takes the Indian captives to pray with the Taliban. As sobbing children file from Mullah Khalid’s room, one of the captives declares that if Aftab were a true Muslim, he would denounce his paedophile, infidel father. For this insult, he is beheaded.