This recap of Mayans MC Season 2, Episode 10, “Hunahpu”, contains spoilers. You can check out our thoughts on the previous episode by clicking these words.

Questions, answers, and more questions were provided by “Hunahpu”, the Mayans MC sophomore season finale. While we got some long-awaited resolutions to on-going plot threads, such as who exactly paid for the murder of Marisol Reyes, we also got some tantalizing suggestions about where the show might go in the future, especially regarding the parentage of Adelita’s (Carla Baratta) child. Angel (Clayton Cardenas) would, of course, like to believe he’s the daddy, but when Lincoln Potter (Ray McKinnon) is handling the DNA tests it’s impossible to tell — especially when you’ve recently blackmailed him into giving your father (Edward James Olmos) legal citizenship.

This is just the tip of the iceberg in Mayans MC Season 2, Episode 10. In the wake of Riz’s (Antonio Jaramillo) tactical death at the manipulative hands of Taza (Raoul Max Trujillo), Bishop (Michael Irby) is caught between his desire for revenge and the greater good of the entire M.C., as the Kings inform him that several charters are willing to defect if the weapons deal with the Vatos Malditos doesn’t happen. What’s he gonna do?

Well, he’s going to throw them for a loop, that’s what. Step one is tentatively attending a meeting with the VM chieftain to keep the Kings happy, despite it risking the ire of his men — especially Coco (Richard Cabral), who is still so fuming about his eye that at one point in “Hunahpu” he even assaults Chucky (Michael Ornstein). Boo! But Bishop has a plan. Once the Kings have departed and EZ (JD Pardo) has been officially patched, the Mayans head out to El Palo’s mother’s 90th birthday and massacre the lot of them, including innocent partygoers and, it turns out in a major last-minute cliffhanger, a fully patched member of SAMCRO. Oops! 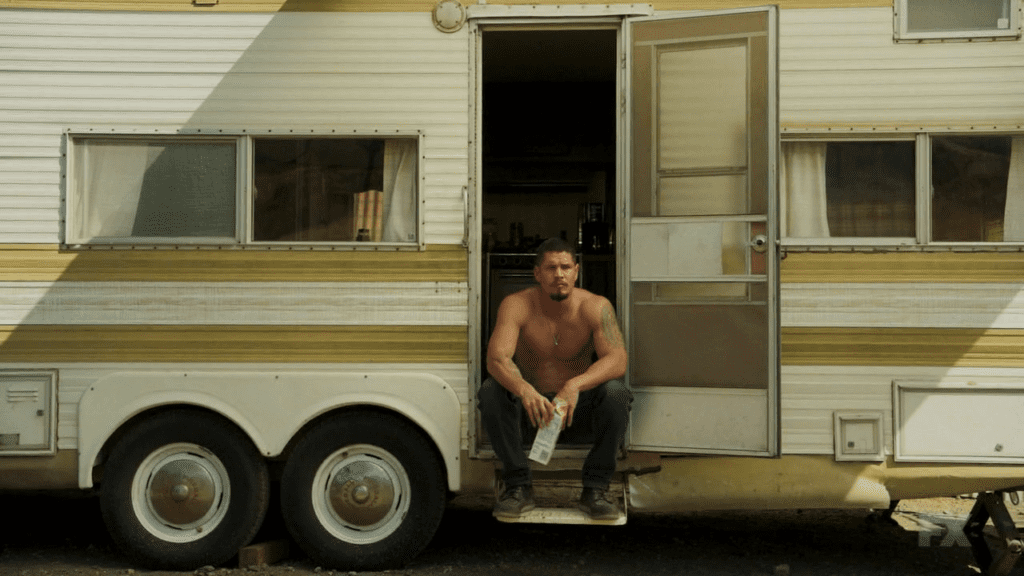 Lord only knows what kind of chaos is going to spiral out of that, but there’s enough elsewhere in Mayans MC Season 2, Episode 10 that it hardly seems important for now. Dita (Ada Maris) confesses to Felipe (Olmos) that it was her who put out the hit on him and Marisol; she was jealous of their happiness, and scared of Miguel’s (Danny Pino) true parentage being revealed. Now she regrets it enough to desire death, and since last season’s fire didn’t do the job, she has convinced herself that it is the responsibility of a Reyes man. But not Felipe. Since EZ has been obsessing about revenge all season, it’s only right that he’s the one to tearfully strangle her. Afterward, he and Angel burn her body. She has put measures in place to ensure that her death looks like a suicide, so when Miguel and Emily (Sarah Bolger) later arrive to cry over her charred remains, that’s what they believe. Alvarez (Emilio Rivera), though, spots damning tire marks at the scene, though it looks like he covers them up.

EZ and Angel have a big decision to make in “Hunahpu”. With the information they have on Potter’s Mexican squeeze and illegitimate child, they can blackmail him into either getting Adelita released or ensuring Felipe can’t be deported. Angel reasons that Adelita would want him to save his father, so that’s what they choose, though either option would have been worth it to see the unflappable Potter finally lose his cool. The problem with their decision, though, is that it leaves Adelita’s child in Potter’s hands, and as he promises in an ominous phone call to Angel, he means to ensure that father and son are never united.

The lingering question remains, though: Is Angel the father? There is confirmation in this episode of who the daddy is, so Potter knows for certain, but the audience is never made aware. It’d be just like him to allow Angel to believe he is being separated from his child, even if the father turns out to be, say, Galindo, which I’m relatively sure is where this storyline is heading. Unfortunately, it’s going to be quite some time until we’re able to find out. For now, let the speculation begin, and be thankful that Mayans MC closed out well enough that we’ll be eagerly anticipating its third outing.