“Itzam-Ye” sees one brother murder another in a revealing episode that promises a wild finale.

“Itzam-Ye” sees one brother murder another in a revealing episode that promises a wild finale.


This recap of Mayans MC Season 2, Episode 9, “Itzam-Ye”, contains spoilers. You can check out our thoughts on the previous episode by clicking these words.

Things are not looking good for the Mayans after last week’s bloody cliffhanger. Coco (Richard Cabral) isn’t blind, but he has to wear an eyepatch. Riz (Antonio Jaramillo) is breathing through tubes, but the surgeons have done a good job. He’ll probably pull through.

Either way, they’re annoyed. The top brass is on their way, and a decision is going to have to be made about what happens next.

Emily (Sarah Bolger) and Miguel (Danny Pino) aren’t doing much better either. They’re more distant than ever. Emily is spending all her time outside, drinking wine and smoking. Miguel is fretting over the newfound distance between them; he knows she’s lying to him, but he knows that he has also been lying to her. It’s contagious. Nestor (Gino Vento) suggests that the truth might be contagious too.

A big scene in “Itzam-Ye” is the meeting between the Mayans and their so-called Kings, who see the Vatos Malditos as having settled a score that, if Riz pulls through, won’t have resulted in any death. The amount of money to be made is more important. Bishop (Michael Irby) is torn between his loyalty to his brothers and the club itself, which stands to benefit from letting bygones be bygone. Coco, who faces the prospect of never being able to ride again, can’t believe that Bishop is treating the club like a corporation.

Time for some backstory in Mayans MC Season 2, Episode 9. Felipe (Edward James Olmos) sits down EZ (JD Pardo) and Angel (Clayton Cardenas) and explains to them about his previous life as Ignacio Cortina. He grew up with the Galindos, his mother taking in an illegitimate child of Jose’s, which would later be repaid when Ignacio’s career in the Federales was threatened by a sting gone wrong and he was saved by the Cartel. It’s time everyone had a sit down with Emily since each person has a piece of the larger puzzle.

A rendezvous with Emily seems a bit more illicit now that Miguel is opening up to her. He shares with his wife what he has uncovered about Potter’s (Ray McKinnon) illicit affair with a woman, which would compromise his activities in the region. It’s leverage that Miguel plans to use to help Adelita (Carla Baratta), but now it’s leverage that Emily also has. It’s probably a bit short-sighted of Miguel to fix the fact he doesn’t trust his wife by trusting her with the most vital intelligence he has. But who cares what I think? 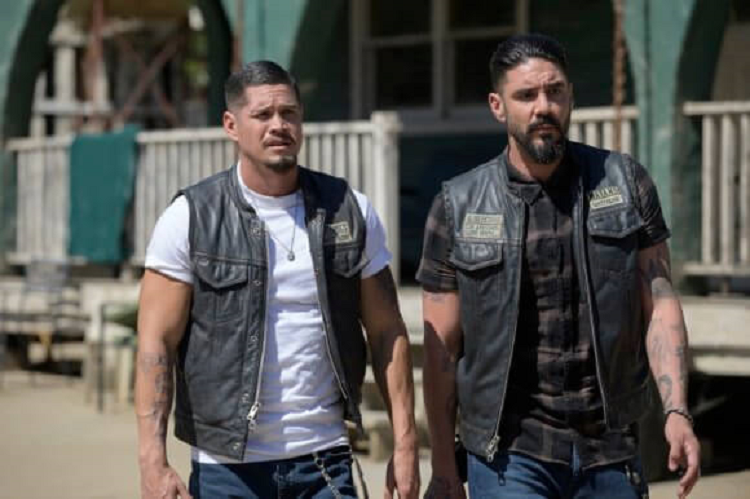 It turns out getting Emily out of the house is pretty easy in “Itzam-Ye”, though, since Felipe goes straight to Dita (Ada Maris), who schedules them fake girl time at spa appointments.

Further negotiations among the Mayans don’t go well. The vote for vengeance on the Vatos is split, which annoys Coco even more. When he storms out, Bishop says that he isn’t hearing anything right now. Angel quips that he isn’t seeing much either.

The sit-down between the Reyes family and Emily is a bit more fruitful. Putting all their heads and information together, they’re able to trace the attempted assassination of Felipe and Marisol back to the Galindos. Felipe explains how he began an affair with Dita and left for America when she wouldn’t let it go. It was only after they crossed the border that they became targets, presenting the question of how anyone knew where they were. Miguel is the prime suspect, but Emily hilariously insists he would have no part in such a thing, which the Reyes brothers are quietly tickled by.

Concerned about what EZ plans to do next, Emily offers him the leverage on Potter in exchange for a promise not to hurt Miguel. I told you she couldn’t be trusted with information! But at least she’s trying to protect her husband. EZ is more concerned with Dita. When he sees her it triggers one of his plot-convenient memories, and he recalls seeing her at the fairground years ago. That’s who found out Felipe and Marisol were in America. It was all her.

The major twist of Mayans MC Season 2, Episode 9 is Taza (Raoul Max Trujillo) taking matters into his own hands. Perhaps it’s out of sympathy for Riz, but it’s probably out of anger. Either way, he pinches Riz’s breathing tube and watches him die. The vote is null and void. The Mayans will go to war with the Vatos. But it took the death of one of their own to decide.

Next week’s finale promises to be chaos.