Soundtrack Season 1, Episode 4, “Track 4: Margot and Frank” delves into Nellie’s parents and their rocky, dysfunctional past that has affected Nellie herself.

Soundtrack Season 1, Episode 4, “Track 4: Margot and Frank” delves into Nellie’s parents and their rocky, dysfunctional past that has affected Nellie herself.


This recap of Netflix series Soundtrack Season 1, Episode 4, “Track 4: Margot and Frank” contains spoilers. You can read the recap of the previous episode by clicking these words.

There’s a lot of history unfolded in Soundtrack Episode 4, “Track 4: Margot and Frank”. It begins with a younger Margot (Nellie’s mother) coming home with groceries in 1986. She sings to Frank “Danny’s Song” by Loggins and Messina and tells him the good news — they are having a baby. It quickly shoots to when Nellie was born, a toddler screaming in a supermarket. An agent nearby tells Margot she could be an actress and offers his card.

In 1990, she heads out to work as her career booms. She asks Nellie for an “I love you mummy” but she responds, “I love you, daddy”. As Nellie gets older, Margot’s career puts the family in a strange position. In 1995, they are clearly wealthy but Frank and Nellie are sleeping in separate beds.

In 2000, Frank moves out. In 2004, Nellie and Margot talk about their future and college and Nellie is clearly not bought in. In 2005, Nellie asks if her mother if she is mad for not going down the path she recommended — her mother says no. In 2007, Margot continues to tell Nellie about different career paths. In 2008, Nellie tells Margot about a man she has met, and they have dinner together. Her mother states, “he’s not the guy for you”. In 2012, Nellie confides in her mother after a break-up, but Margot says, “I told you so”. Nellie is annoyed at her mother and stops answering the phone.

Then Episode 4 flits to Frank. He’s walking and he sings “Baker Street” by Gerry Rafferty. He’s drinking a lot, but he’s caught the attention of another woman. Nellie shows her father a video of Sam playing the piano when he was a boy and Frank insists that he must meet him, especially when she describes how she feels around Sam.

When they meet, Sam accidentally slips up and discusses Frank’s dreams. Frank asks Sam when is he going to meet Margot, and recommends that they all have dinner together like a family reunion. Nellie wants to pretend that Sam and Frank have not met so her mother does not get jealous.

Soundtrack Episode 4 moves back to Margot who is trying to empty her rubbish into a neighbours bin. A man, who is a Hollywood director catches her and holds a conversation. Nellie and her friend visit Margot. They talk about Sam and Margot breaks into “Nobody’s Girl” by Bonnie Raitt, showing memories of her wedding and then slowly breaking apart with Frank.

It’s Soundtrack’s Medley time and it’s at the family dinner in Track 4. Sam brings over orange wine and introduces himself to Margot. He calmly examines the house and bonds with Margot in the dining room, making a good impression. He even sets the table. In a turn of events, Frank brings his partner who is crazy and it makes the entire atmosphere tense and awkward. As Frank oversteps the mark by inappropriately bringing his partner, Nellie invites her friend over to ease the tension. Margot also invites her friend over, the director from across the street. 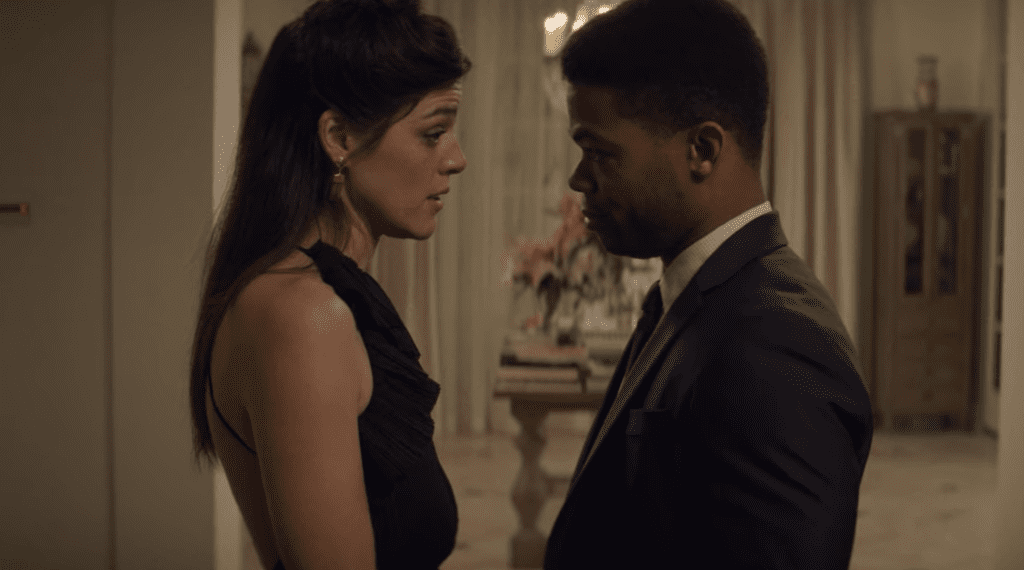 Dinner begins, producing a stand-out scene so far in Netflix’s Soundtrack. Frank brings up Sam’s pianist skills and then asks what the director does. Frank tries telling the director about his self-inflating tyre idea. Sam tells Margot about his parents and in return, Margot delves into how Nellie supported Levi at her own detriment. In the kitchen, Margot tells Nellie that her father has made the night into a business opportunity.

It then kicks off…

Margot reveals to the table that self-inflating tyres already exist, and then Frank’s partner tries defending him, saying that Frank warned her about this. Margot then reveals that Frank was imprisoned for fraud and embezzlement. This surfaces the fact that Nellie supports Frank’s finances, but Margot drops the biggest bombshell — despite Nellie supporting her father, Nellie did not know that Frank still earns the residuals from their divorce. He never needed Nellie’s money. Frank loses it and says half the stuff in the house is his and starts smashing up the place and breaks into “Reelin’ In The Years” by Steely Dan. As a final punch to Nellie’s and Margot’s hearts, he rips a drawing that was important to both of them and leaves.

Sam thanks Margot for dinner and apologises if his presence caused an upset (Nellie overhears this conversation). Margot tells Sam that Nellie is not ready for him, but Sam proudly stands firm and reveals that their relationship is an open door where they tell each other what they need — “She’s able to grow and change in a way I’ve never seen before”.

Nellie walks in and Sam walks out to start the car. Margot tells Nellie that Sam is not the one yet because she lied about where he worked and told her father first. Nellie claims she lied and conspired because she was managing hope that he would be accepted. She leaves by saying, “I don’t care what you think anymore”.

Soundtrack Season 1, Episode 4, “Track 4: Margot and Frank” closes with a flashback. Frank and Margot both looking at baby Nellie. Young Margot sings “Both Sides Now” by Judy Collins. It reveals more of the family history and then present-day Margot imagines Nellie at different ages at the dinner table, and each version leaves one by one. All of a sudden, Barry runs to her and says “grandma!”.

Best episode of Soundtrack so far.