Lost in Space Season 2, Episode 8, “Unknown” plays out a planned mutiny, with the chapter full of drama and new reveals.

Lost in Space Season 2, Episode 8, “Unknown” plays out a planned mutiny, with the chapter full of drama and new reveals.

The story is certainly growing in strength as Season 2 reaches the latter stages. Episode 8, “Unknown” starts with John (Toby Stephens) laying down the rules of the mutiny to the family. John and Maureen form a plan, but unfortunately, John can’t leave as he is on house arrest. Part of the plan involves emotionally manipulating a security guard who has a friend down at the colony. Meanwhile, the Robot is carrying the engine with Will supporting. Don is freed by Penny to help with the mutiny.

The mutiny begins! Maureen enters the Bridge to speak to the captain about the 5,000 crew members stranded at the colony base. Meanwhile, they have reconfigured the ship’s systems to only respond to Maureen. The captain is flustered and asks the security guard to escort Maureen away, but Maureen reminds him of an Anton Penn who is at the colony base — it’s a man who saved the security guard’s life. The security guard decides to help Maureen and shuts the doors on the bridge. Hastings notices that the power is lost.

When news spreads in Episode 8, “Unknown”, Will is mortified that Hastings has allowed 5,000 crew members to be stranded. Will and the Robot walk off leaving Hastings worried about the engine plans. Maureen tells the captain that the planet ahead has plenty of ammonia that could stop the rust infection in the water. Maureen insists they are going to take the Resolute to that planet. The captain is skeptical about Maureen’s plans — “This ship is the last hope for 8 billion people”.

Hastings needs to find a way to stop Maureen — it’s clear by the way the character is presented that he’s sinister. Hastings tells John that he does not want anyone to get hurt and asks him to tell Maureen to stand down. Hastings asks Judy to join the table and explains that her mother has taken it too far. Hastings reveals a family secret; that Maureen altered Will’s scores so he could join the Resolute. He reveals that she had to trade something of value to get those scores altered — Maureen traded with Hastings.

Maureen is all systems go! She announces to the ship for everyone to get ready on their states — it’s going to be a bumpy ride. First, she activates the thrusts and then sends the ship into a descent to enter the planet’s atmosphere. While the ship starts breaking apart, the Robot makes fixes. The Resolute arrives in the planet’s atmosphere safely — for now. Maureen asks the crew to start intaking the ammonia in the ship’s pipes. 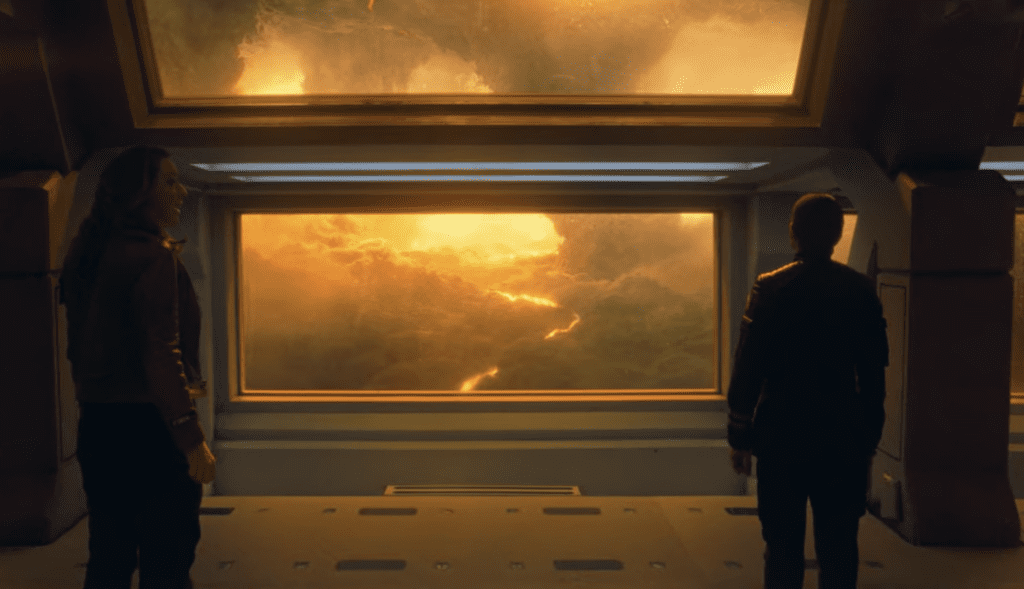 Hastings continues to manipulate in Episode 8, “Unknown” — he reminds John about the risks associated with the rust virus. He once again asks Judy to tell her mother to stand down or he will use the access codes provided by Maureen to open up the AGS airlock and the atmosphere will flood the room, causing the pipes to explode and vaporize; this plan will also put Don and crew members at risk as they are helping the pipes intake the ammonia. Judy and John refuse, so Hastings walks off, claiming Maureen and Will will be sent back to earth. Hastings turns off the comms.

Hastings begins typing in the passwords to manually override the systems. John tells Smith to get to the Bridge to warn Maureen about the OGS airlock. On the way to the bridge, Smith sees Samantha and freaks out as she remembers she killed the young girl’s father. As much as Smith tries, she cannot get on to the bridge, it’s locked off. Hastings hits execute and the airlock opens. Don uses the metal block attached to him to keep the door open so crew members can escape but it leaves him and Ava stranded outside the airlock, slowly losing oxygen.

Maureen is confused by the systems overriding, but eventually, she realizes what has happened and flies an emergency pod off the Resolute to help save Don and Ava. Maureen manages to use the pod to close off the atmosphere and Don and Ava are saved. Judy wonders why everything is back online — John confirms that they have lost.

Hastings returns to the bridge and smugly tells his captain that she has her ship back. The captain wonders if she has Hastings to thank but says she wants to continue to decontaminate the water as per Maureen’s plans. Meanwhile, an angry John confronts Smith and asks why she did not warn Maureen. Smith states that she tried — John claims he does not trust her anymore after giving Smith a second chance. I’m pretty sure Smith has had plenty of chances, so not sure what John is harping on about here.

Lost in Space Season 2, Episode 8, “Unknown” closes with the Robot attacking the security guards that are protecting Scarecrow. The Robot sets Scarecrow free and realizes the robot is dying. Will approaches his Robot slowly and says sorry. The Robot walks away from Will and turns around and says, “No, Will Robinson”. Looks like they have lost their chance in firing that engine — it seems the Robot was not happy with the conditions Scarecrow was under.