Home » TV » Dracula Recap: Down to the Last Drop

Dracula Recap: Down to the Last Drop

“The Dark Compass” brought the BBC’s adaptation of Dracula to a close in a bizarre but satisfying and earned way.

“The Dark Compass” brought the BBC’s adaptation of Dracula to a close in a bizarre but satisfying and earned way.

Blood-red lettering informs us that Dracula Episode 3, its finale, is set 123 years after the end of the previous installment. Which is a long time, obviously, but not for immortal bloodsuckers and their generational nemeses. Everything in “The Dark Compass” is connected, and connected through the most fitting of things: Blood.

At a nice house in the middle of nowhere, spoiled a bit by a dirty caravan in the garden, Dracula (Claes Bang) wakes a woman who mistakes him for her drunk, abusive husband. When he leads her downstairs, she finds the contents of her fridge strewn across the floor. She asks Drac what he has done to her fridge. “Is the fridge the white box?” he asks. “Yeah.” “Bob’s in the fridge.” Drac has Agatha’s ID, though “Agatha” in Dracula Episode 3 is in fact her descendant, Zoe. We’re introduced to her properly when we cut back to the beach where we left things last night. Agatha was Zoe’s great, great aunt on her father’s side. Dracula is fascinated by the progress that has been made in the meantime — the “flying thing”, and the camera which he takes from an armed guard he subsequently shoots in the head. After pointing his stolen gun at Zoe, he explodes into a cloud of bats, still apparently knowing how to make an exit as well as an entrance.

Back the remote house in “The Dark Compass”, Katherine (Chanel Cresswell) is terrified, especially when Drac lops off Bob’s fingers as they creep around the fridge door. Hilariously, Dracula thinks Katherine must be extraordinarily wealthy because of her television and her car. Her house is, he thinks, the most luxurious he has ever seen in his long life, which he confesses to her has been that of a vampire. She’d rather not believe it, but she can’t not. “Trust the hairs on the back of your neck,” Drac says, “I’m the reason you have them.” She quizzes him about various vampire-related things, including whether he has a reflection, at which point we’re treated to a glimpse of what he really sees in the mirror — himself, just an incredibly old and haggard version.

A noise upstairs disturbs them, and Katherine takes the opportunity to escape; Drac can’t pursue her through the daylight. Upstairs he finds a coffin with dirt and a ringing phone in it. It’s Zoe calling. She tells him to get in the box as an excavator begins to tear the house apart, letting more light in. She insists again that he enter the box. He presumably does, and Agatha enters the building, greeted by Bob as the fridge door sags open. From behind, Dracula bites Agatha.

She dreams briefly of some red-tinged bloodsoaked pocket dimension before it quickly becomes apparent to Drac that drinking Zoe’s blood was a bad idea — his body rejects it and he spews it back up and collapses. She tells her people to get him in the box.

Wherever Drac is taken in “The Dark Compass”, it contains a portrait of his old “friend” Jonathan Harker. We meet another young man, Jack (Matthew Beard), who is receiving a call from old Jonny, but he ignores it. A follow-up message implores him to call ASAP. But he’s much more concerned with Lucy Westenra (Lydia West), a shallow party animal whom he meets later at a nightclub where her newest suitor, a wealthy American named Quincy (Phil Dunster), proposes to her, much to his annoyance. Jack loves Lucy quite obviously and pathetically, whereas she seems to love little but attention. She’ll get more than enough of that before Dracula Episode 3 is over with, but we’ll get to that.

Jack, a bit lovesick, is enrolled in a medical program at the Jonathan Harker Foundation, where Zoe works. There, a lecture on the discovery of the Demeter’s wreckage and Dracula’s coffin reveals that the Count was revived by the wandering finger of a scuba diver, which he bit. Ten hours later, he crawled onto the beach, where the Foundation was waiting for him. Now he’s being held in a Skyfall-style glass-walled triangular prison which can let the light in, if necessary. Zoe arrives and tells him he’s going to give blood — “Well, this is a first,” he replies. She can’t penetrate his skin with a syringe so he opens his wrist with a fingernail. As the blood pores, Zoe explains that the Foundation was established by Harker’s widow Mina with help from Agatha’s extended family. He astutely observes that, as a 500-year-old warlord, he knows mercenaries when he sees them, and the Foundation has them in plentiful supply. So who is funding all this? He also deduces that the reason Zoe’s blood was poisonous to him is because she has cancer — the dying are death to vampires. There’s no time to chat further, though, as Drac has been Skyping — via Jack’s phone — with Frank (Mark Gatiss himself), a lawyer whose family firm has been representing the Count since 1896. He too questions why a medical facility has access to mercenaries. The deadline for Drac’s release is 20:11 — sunset. 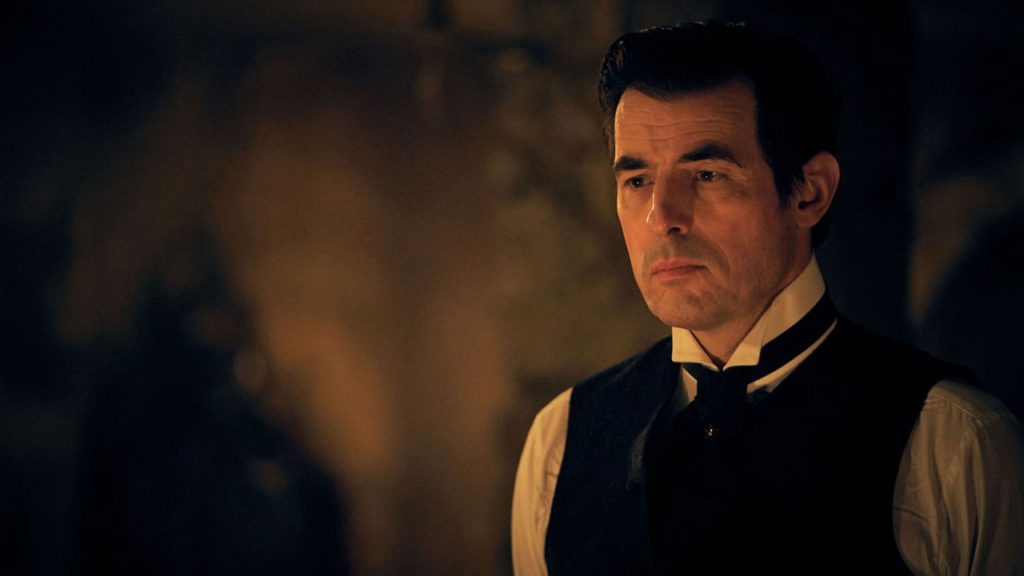 Before Drac is released, he sends Zoe an email about blood and whether she has worked out how to read it, which she’ll have to if she ever hopes to match him. She drinks the vial of his blood. Drac, meanwhile, leaves in Frank’s car, though gets a call from Lucy on Jack’s phone. He introduces himself.

Three months later and, with the help of Frank, Dracula has been eating specific people in the hopes of acquiring their athletic abilities, since in this modern age everything is done for you and he’s suddenly having to exercise. He’s on Tinder and has some kind of relationship with Lucy, whom we see still partying, though now with a scar on her neck, hidden by a choker. Late at night, she goes to meet him in a graveyard (“I like to spend time with people my own age”) and he kindly lets her listen to the tormented undead knocking on the inside of their coffins. He also points out an undead child looking at her and calling her beautiful but warns that if she plays with him he’ll follow her home. He has, apparently, never met anyone quite like her.

When Lucy’s friend wakes up and finds her missing, he locates her via an app and goes to get her. He finds her in the aftermath of Dracula’s feeding, which she engaged in willingly, asking him to take her somewhere where she doesn’t have to smile (Drac’s victims dream while they’re being scoffed.) Since Zoe refuses to see doctors, her friend instead calls Jack, who, upon seeing the bite mark on her neck, goes to visit Zoe in hospital. They debate why Dracula chose Zoe and why he keeps returning to her. What’s special about him? Jack admits that he loves her, but that she is otherwise perfectly ordinary. Except she can’t be, or why would he keep coming back for more?

Dracula Episode 3 rejoins Lucy in bed, sickly, where we learn that the undead child has indeed followed her home. Drac arrives and asks for an invite, and she obliges. He stabs the ghoul, and feeds on her again; in the next shot, she’s very dead, though we see her reflection in the mirror, screaming for help, and Dracula comforting her. “Hush, Lucy, you’re mine now.” At her funeral, she continues screaming inside her casket and, despite Dracula’s warnings, is cremated, conscious for every moment.

Thanks to having ingested Dracula’s blood, Zoe is able to communicate through the ages with Agatha in “The Dark Compass”, and they debate what’s so special about Lucy. Zoe is dying and Agatha is dead, but the chipper nun says that neither of them is quite done yet.

With apparent ease, Zoe and Jack track down Dracula’s abode, where he’s expecting Lucy and is surprised to hear she has been cremated, despite his advice. The doorbell rings, and he says to Jack that now might be a good time to reflect that beauty is only skin deep. Lucy arrives, and while her reflection in the gleaming table is as fetching as ever, as the camera pans upwards we see that she is a charred, horrifying creature now, which Zoe reveals to her by convincing her to take a selfie. For all her bluster about the pains of being beautiful, Lucy is inconsolable to discover that she isn’t any longer. Drac tries to make her feel better, explaining that she is his finest bride, the only one to ever willingly open her veins, but it’s Jack who gets through to her, asking for a smooch. With a wooden stake hidden behind his back, he gets one, and once Lucy detects the weapon, she begs him to kill her. He does, which Drac thinks is a shame. She was virtually unique, almost in love with the concept of death. This leads Zoe to a realization, and she orders Jack from the room.

Here, in the closing scene of Dracula Season 1, Episode 3 and thus the miniseries itself, we get the payoff for first Agatha and now Zoe’s speculation of why Drac is so arbitrarily susceptible to sunlight, and the cross, and so on. As it turns out, he isn’t, which she demonstrates by pulling down the curtains and bathing him in harmless sunlight. These apparent weaknesses are just habits — the rules of the beast. But why? What is he afraid of? Zoe deduces that it’s death. He’s afraid to die, to accept death willingly, and thus he lives forever in shame. He’s afraid of the cross because it represents the courage to die, which he lacks. Having pointed this out, Zoe considers herself victorious. Dracula stands in the light and looks at the sun, and for a brief second, the window frames cast a cross of shadow on his chest. In a final, quasi-romantic sacrifice, Dracula drinks Zoe’s poisonous blood, killing them both. “After all this time,” he says to her, “do you think I’d let it hurt?”

While “The Dark Compass” will surely prove divisive, I loved it nonetheless. Despite lacking some of the intelligence and tension of the previous two episodes, it instead felt bolder, bringing disparate elements together in service of an unusual yet still fitting conclusion — and more to the point, a conclusion that really did feel like an ending. For once, Dracula may not return from the dead, and after this successful adaptation, the grave seems the best place for him — for a while, anyway.

1 thought on “Dracula Recap: Down to the Last Drop”