Cats Review: A Litter Box of a Mess

Cats is incoherent in almost every way.

Cats is incoherent in almost every way.

I now have a theory that the great play by play man, Jack Buck(I previously attributed it to Vin Scully), wasn’t talking about Kirk Gibson’s famous World Series home run. I’m practically one hundred percent certain that he must have jumped into a time machine and just saw the motion picture train wreck, Cats. There is simply no rhyme or reason for anything that goes on in this production. Tom Hooper’s film is equivalent to the worst kind of self-indulgent street art that could have been more competently done on James Corden’s Crosswalk the Musical.

Now, this is usually the section where I map out the plot of the film for my readership (which includes, you know, my mom and her cousins), but I honestly can’t decipher the film’s script if I tried. That’s not to say the original didn’t have a point, it does, where “a tribe of cats must decide yearly which one will ascend to the Heaviside Layer and come back to a new life. The issue is that the director and Billy Elliott scribe Lee Hall (who had a nice run there for a while with Elliott, War Horse, Victoria & Abdul, and Rocketman) couldn’t translate that message on film. They tried to create one of those fathom events and forgot to make a movie. 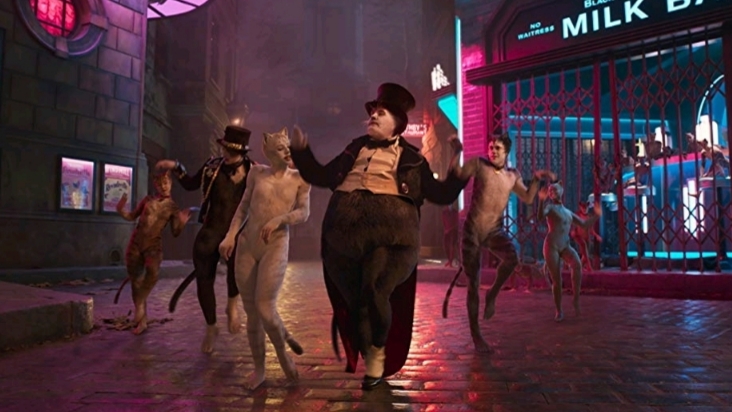 The cast is loaded with top talent across multiple industries of entertainment. Led by newcomer and The Royal Ballet dancer Francesca Hayward, you also have James Corden, Idris Elba, Rebel Wilson, Judi Dench, Jennifer Hudson, Ian McKellen, Ray Winstone, Jason Derulo, and even America’s sweetheart, Taylor Swift. Then again, they are covered up with so much CGI who can tell when they appear; half the time I thought Paul Bettany was in the film, but it turns out he never set foot in this litter box mess.

Even then, the most ardent fans of the Broadway musical smash had trouble communicating the plot to its detractors; even if it had a worldwide fan base in the ’80s, and it quickly became a butt of jokes during its run (I can’t believe it didn’t inspire a series of spin-offs like Dogs or Hamsters, but maybe that’s a blind spot for me). This goes to show you how high-class tastes of that era will not translate well today (well, except cocaine apparently. That will never go out of style). I’m sure the makers of Cats had their hearts in the right place, but the result was like a cat’s nails across a chalkboard.

T.S. Elliot is rolling around in his shoebox right now and I’m sure Taylor Swift’s next big hit will be a song about the jilted experience.

1 thought on “Cats Review: A Litter Box of a Mess”