Episode 4, “Chapter Twenty-Four: The Hare Moon” shows the true scale of Greendale’s problems. Up until now, the witches have been complacent and now they are faced with a real threat. Episode 4 is a genuinely good middle chapter to Season 3.

It opens up with Roz telling Harvey that they could spend a whole night together with her father away (hint, hint). But there is something lurking in Harvey’s house — it’s the snake lady and his father is dating her. Meanwhile, Nick is on the brink of a breakdown — he’s drinking entire bottles of alcohol, numbing his pain.

Chilling Adventures of Sabrina Season 3, Episode 4 is a tragic turning point for Nick; he’s ignoring Sabrina and keeps trying to torture Lucifer, who mocks him repeatedly.

Ambrose updates his family on their powers — they’ve been cut off by the Dark Lord; he has rendered the entire Coven powerless. Zelda storms over to Lucifer and asks for their protection back. Lucifer reveals that Sabrina is now the Queen of Hell. This causes a brief family argument and Zelda accuses Sabrina of liking power.

The rift between Sabrina and Zelda is growing with each episode passing.

Ambrose and Sabrina meet Lilith in Hell and ask where they can find their power to return it to the Coven. Lilith reveals an unwanted truth; the power is Lucifer’s gift. In order to get their power back, they will need to find another angel.

Fortunately and predictably, finding an angel was not too hard. Dorian has one usefully locked away.

Sabrina and Ambrose meet Dorian and ask about the witch hunters (angels). He has one trapped in a painting and Sabrina wants the angel’s blood. While Sabrina is distracted by Nick cheating on her with his playmates, Dorian drinks most of the angel blood and leaves Sabrina a vial. Unfortunately, a vial is not enough. Hilda has an idea; she suggests a moon bath at the Hare Moon festivity; mixing the blood in oils and rubbing it all over their bodies as the moonlight gives them the source of power.

Great idea to be fair, something I’d have thought of if I was a witch…

So the Moon Hare begins in Chapter Twenty-Four. The Coven breaks into a song to start the festive tradition. Sabrina carries a hare through the woods as part of the tradition. She is suddenly confronted by the Phantasmagoria carnival organizers. The Coven wants to celebrate the Hare Moon but the carnival organizers want to celebrate Ostara. Hilda kindly asks them if they want to join their picnic.

But the picnic turns eery in Chilling Adventures of Sabrina Season 3, Episode 4 when someone mentions praying to Lilith. Hilda tells Zelda that they are Pagan witches. Meanwhile, the Pagan witches sense that the Satanic witches are weak. The Spellmans try to start a storm to distract the Pagans, but their powers are too weak. 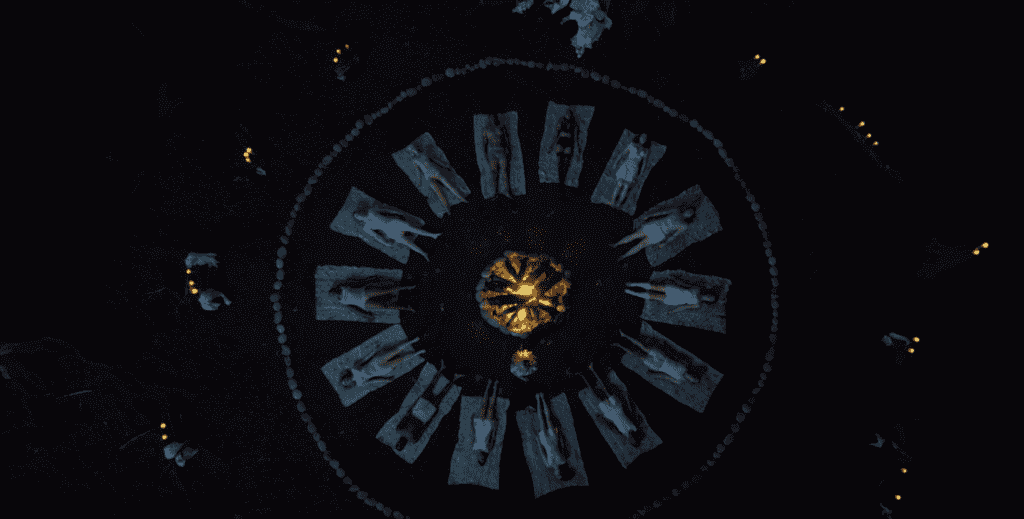 As Dorcas tries to seduce Nick, a snake bites her. The snake lady sucks out the poison. Nick kills the snake and he is immediately called a murderer by the Pagans. The Pagans suggest that it is their time again, while Zelda and Hilda suggest taking a peace offering over to them.

This is truly a picnic gone mad.

While the tense stand-off between the Pagans and the Satan witches continues, Sabrina chases an angry Nick, producing the best scene so far in Season 3. She tells him she wants to understand his pain and his trauma; Sabrina is trying to be understanding and wants to know what happened in Hell. Nick cuts a frustrated figure; he describes his experiences in Hell that felt like decades — “It was a catalog of violation // all to protect you // you weren’t worth it”. His words are of a man that is well and truly hurt and in pain. Sabrina begs him, asking if she can help him. He claims he doesn’t want help as all he sees when he looks at her, is her father.

The Nick and Sabrina love fest may well be truly over, for now.

Episode 4, “Chapter Twenty-Four: The Hare Moon” has time to explore Roz and Harvey further. During the entire Hare Moon madness, Roz has been hit by some kind of fever from the snake lady while she was investigating her tent with Harvey. Unfortunately, due to low powers, Sabrina is unable to help until after the Hare Moon. Harvey is concerned that Roz can no longer move due to this strange fever. He grabs a gun to head to the carnival to find out what has hurt Roz. Harvey enters one of the snake lady’s tents and looks shocked when he sees something.

Agatha is put under one of the Pagan’s spells; as Dorcas heads to the Pagans to offer a gift the snake lady tells her that her sister has been detained. Meanwhile, Nick enters Lucifer’s dungeon. Lucifer offers him red mercury — a constant high that never lowers, and claims it will be the best rush of his life.

The Coven starts the oil/blood mix ritual. Hilda stands in the middle of the circle and puts the Hare Moon in motion — it appears to be working, with everyone’s skins glowing. But the Pagans, sensing the Satanic witches’ weakness, conjure a ritual to take away their Hare Moon. The more that they eat their cake, the more the moon disappears and it turns into an eclipse. Zelda understands what has happened and wants to prepare for a counter-attack on the Pagans.

When Sabrina and co return to the Academy, all of their beds are full of snakes and the Pagans are outside. They tell the Satanic witches that the Old Gods are returning. They give Zelda and the group three days to decide whether or not to bow down to their Gods. In the distance, Dorca is turned into stone.

In a twist, Zelda suggests freeing the Dark Lord as they have no choice. Sabrina heads to Lucifer’s dungeon to speak the Dark Lord but finds Nick on the floor frothing from the mouth — he has overdosed.

Sabrina has a lot on her plate but one of those items is war. Chapter Twenty-Four: The Hare Moon is the catalyst.