Chilling Adventures of Sabrina season 3, episode 5 recap – “The Devil Within”

Chilling Adventures of Sabrina Season 3, Episode 5 raises the stakes even more with the witches desperate to find protection against the pagans.

Chilling Adventures of Sabrina Season 3, Episode 5 raises the stakes even more with the witches desperate to find protection against the pagans.

Episode 5, “Chapter Twenty-Five: The Devil Within” is a race against time for the Coven. They must find protection against the growing pagans and the lurking Dark Lord. Episode 5 continues to up the stakes.

“The Devil Within” opens up with Nick waking up in shock. Ambrose and Sabrina tell him what he did — overdosed on highly dangerous elements and let Lucifer free. Ambrose suggests one unrelenting detoxing in a single day. Nick repeatedly says he hates Sabrina.

You can tell Sabrina is still hurt by his words but is determined to fix him.

As for Roz, she is still frozen into a statue. Sabrina tells Harvey and Theo that Roz might not be dead. When Harvey is alone with Roz, Lucifer turns up and mocks him for not doing anything. He suggests that Harvey goes to the carnival to get revenge. Harvey and his school friends trash the carnival and then a paan witch turns up and turns all his friends in pigs.

You know the saying, f–k with a witch, they’ll turn you into a pig…

Sabrina still has Hell to claim in Chilling Adventures of Sabrina Season 3, Episode 5. Caliban and Sabrina are tasked to seek and retrieve the second unholy artifact — Pontius Pilate’s bowl. Sabrina initially says she cannot accept the challenge right now due to the Coven needing her, but Lilith says all their suffering is her fault. The Unholy Regalia is their only chance of replenishing the energy of the Coven. Zelda agrees.

So the second round begins in “Chapter Twenty-Five: The Devil Within” and Sabrina enters the Place of Skulls and heads to the Temple of Jerusalem. Lilith warns Sabrina to not get trapped into the time loop. When she arrives, the centurions imprison her. She learns in the prison that Pontius will plan to condemn Sabrina and Caliban to death and then wash his hands in the bowl. Another prisoner, Barrabas, tells Sabrina what will happen when he is pardoned.

Before Sabrina puts her plans into place, Caliban offers to take the one hundred lashes — it seems he respects Sabrina as the current Queen of the throne.

Anyway, Pontius Pilate starts his ceremony in Chilling Adventures of Sabrina Season 3, Episode 5 and as predicted, Barrabas is pardoned. Sabrina uses time magick to trick Pontius. Sabrina runs away with the bowl, leaving Caliban behind. Sabrina is chased but she manages to get away. Lilith states that Caliban could be in a time loop forever.

What I like about Chilling Adventures of Sabrina is that fantasy stories use artifact missions frequently, but this Netflix series has a way of making it uniquely interesting and fun to watch. It doesn’t feel like a gimmick to buy the writers time.

Back to Academy, and Prudence is trying to help a tranced Agatha and get information from her — they learn about the great god Pan, one of the oldest, craziest gods ever. Ambrose sees life in Dorcas still and he has an idea (like always); to use the circles of stones to amplify their energies, summon the other witches and give them a chance against the pagans. 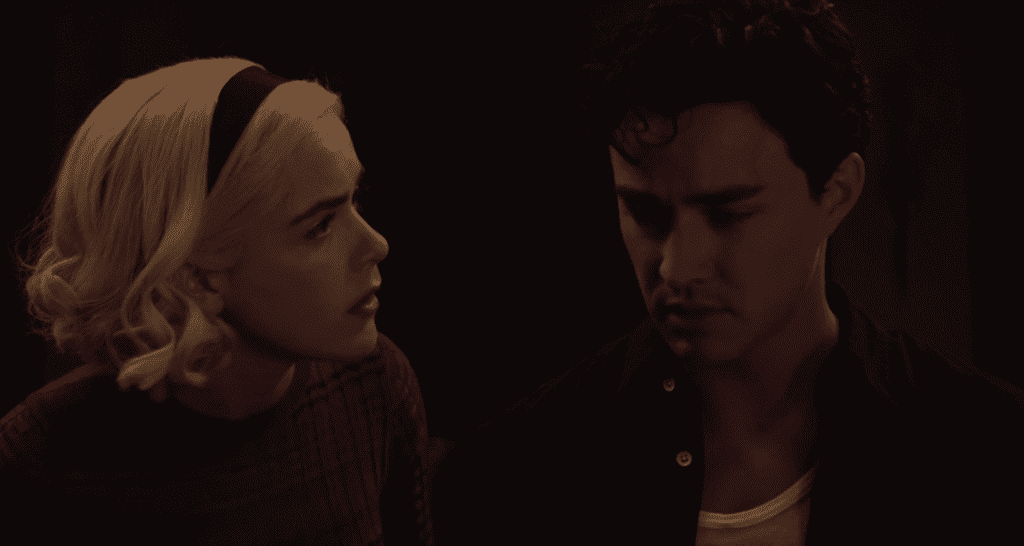 Ambrose gets the group together at the Academy and they start the summoning to alert the other witches. He makes it known that they will be using the last of their natural magicks. As they start the summoning, Agatha enters the room and breaks one of the stones — Lucifer has told her to get revenge. Agatha reveals that the Dark Lord freed her.

Melvin, who was also corrupted by Lucifer, runs in panicking, stating that Elspeth has been slain for the pagan’s oldest god — Zelda announces that surrender was never the option.

Episode 5, “The Devil Within”, is putting all the elements of war together — a point of no return scenario.

As for Nick’s affliction, Ambrose learns that Lucifer has left residue inside of Nick. He suggests getting it all out of him. Ambrose suggests enticing the residue to a stronger host — he means Sabrina. Sabrina and Ambrose start a ritual to eke out the residue using Sabrina’s blood. The residue attaches to Sabrina and she puts it into Pontius Pilate’s bowl. Ambrose suggests that he might have some use with the Dark Lord’s residue.

Ambrose is a constant man with a plan and he offers the solution to Zelda and Hilda.

“Chapter Twenty-Five: The Devil Within” closes with more stakes on the line but first another heartbreaking scene for Sabrina and Nick. With all the residue out of Nick, Sabrina goes to speak to him. He admits to feeling better but he feels ashamed of what he has said and done. Sabrina tells Nick she wants things to go back to how they were, but Nick does not think they can be together anymore — he doesn’t know if it was the Dark Lord that made him say all those cruel things or if the Dark Lord helped bring out a side of him that is deep from within. Nick tells Sabrina she is liking the power and that she should fight for her Coven but Sabrina wants to give it all up for Nick, which he denies is true. Sabrina offers to kiss Nick but he knows if he kisses back, he won’t be able to walk away.

Sabrina and Lilith deliver the bowl to Hell and Sabrina announces that Caliban could be dead. But Caliban turns up after she declares victory. Caliban is made out of clay, and he waited under the dust for 2,000 years in a time loop after she cheated for the bowl and reformed. The next round of The Unholy Regalia will announce a winner — it’s sudden death! Sabrina lets Lilith know that the Dark Lord is free — she’s scared for her life.

I’m surprised Lilith could not sense that the Dark Lord had returned.

Chilling Adventures of Sabrina Season 3, Episode 5, “The Devil Within” closes with Gryla turning up from another witch coven — they heard the summon. The new witches declare that because they were summoned against their will that they all must die.

A bit harsh — looks like Sabrina’s Coven has another enemy.

1 thought on “Chilling Adventures of Sabrina season 3, episode 5 recap – “The Devil Within””