Chilling Adventures of Sabrina season 3, episode 6 recap – “All of Them Witches”


This recap of Netflix Series Chilling Adventures of Sabrina Season 3, Episode 6, “Chapter Twenty-Six: All of Them Witches” contains significant spoilers.

“Chapter Twenty-Six: All of Them Witches” is all about unity during turmoil. It’s clear that the witches are more desperate than usual in Season 3. It has shown in each episode.

To open up Chilling Adventures of Sabrina Season 3, Episode 6, Zelda halts the summoned witches and persuades them not to resort to violence. She tells them about the pagans and their great god returning, Pan. Meanwhile, the tension between Nick and Sabrina is understandably rife. Prudence suggests a spell to cut her emotional ties to him.

Romance subplots in Episode 6, “All of Them Witches”, are deepening again.

So Zelda’s attempts to forge a supernatural alliance begins; Gryla asks Zelda why they should join her now. Zelda explains that they need their strength and make a new coven.

A large portion of Chapter Twenty-Six is Sabrina and her friends working with Caliban in a surprising twist. Sabrina learns that Robin is with the pagans and asks why he has left them. Robin explains that he loves Theo and that the pagans came to Greendale to resurrect the pagan gods. He explains further that the pagans need virgins as a sacrifice for the Green Man’s resurrection.

I genuinely believed at this point Sabrina and her friends were going to suggest taking each other’s virginities to prevent the threat.

Caliban turns up to help — he knows a spell to help Roz and has a proposal for Sabrina. He proposes that they work together and run the Hell throne together, which would mean marriage — Caliban is willing to negotiate, taking Earth off his plans and working with Sabrina to work with Heaven and reform Hell. Sabrina insists that if this was to ever happen, their alignment would be political, not romantic. Despite not finishing negotiations, Caliban gives Sabrina the spell.

I’m still not sold on these two romantically yet — it would complicate Sabrina’s love life further.

When they return to Harvey, Roz is broken into pieces. Caliban quickly suggests that they need to put her back together. Sabrina tells Harvey that she and Nick have never had sex either and reveals that they have broken up — they touch hands briefly.

As part of the spell, Harvey must give up his love for Roz to the god of love, Aphrodite. If he betrays his vow and kisses her, she will turn back into stone — this gesture sounded very Disney-like.

Harvey makes the vow but his offering is rejected. Caliban suggests that Harvey does not truly love her or it is not really Roz. A frustrated Harvey punches Caliban. I questioned why he’d even bother — the Prince is made out of clay, it’s pointless.

Robin brings up a new plan to help Roz; he says the pagan witch Circe has the powers to turn their friend back into flesh. Sabrina talks to Prudence about a plan but as she does, Nick gets jealous that Caliban is there — Sabrina puts up a front and tells Nick that he is not a martyr or innocent in all this and that she has better things to do than deal with his drama and narcissism. 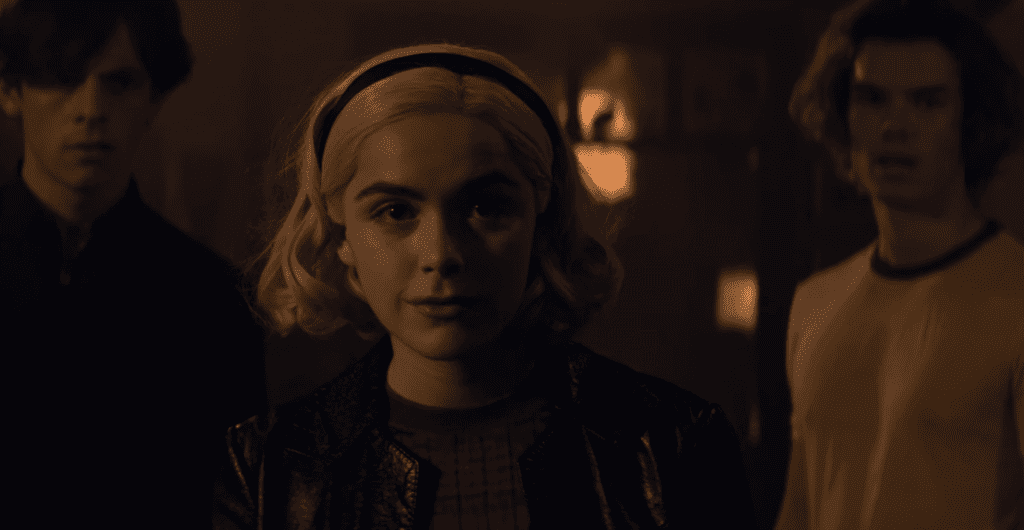 Sabrina and Ambrose give the witches wine and offers a battle rallying cry — “Who wants to mess up some pagans?”. The new witches get into a circle and Sabrina heads to Circe at the carnival. The new witches are giving temporary power to Sabrina. She grabs Circe and teleports her back. After moments of threatening Circe, the pagan witch agrees to turn Roz and Dorcas back into flesh. Roz and Dorcas return to their normal bodies.

Oh, and Circe also turns the pigs back into jocks — can’t forget about them.

Hilda is also having a terrible time in “Chapter Twenty-Six: All of Them Witches”. She spends time with Dr. Cee but he finally sees her transformation as some kind of spider woman. Hilda tells Dr. Cee about the pagans’ spell and thinks she is going to die. When Dr. Cee heads out, Hilda eats a customer — she tells Dr. Cee that she needed blood and that she needs eggs inside of her, waiting to be fertilized. I don’t think this is the kind of dirty talk Dr. Cee is accustomed to as he looks horrified.

Hilda rings Zelda and asks her to bring a gun.

As for Lilith, she receives a gift from the Dark Lord in Chilling Adventures of Sabrina Season 3, Episode 6. It’s the fetish doll that was given to her by Adam. It’s a signal that she is going to get revenge. Lilith is desperate for a safe haven. She asks Zelda for asylum but Zelda rejects her. Lilith heads to Ms. Wardwell’s house and pretends to be Adam. Lilith asks Ms. Wardwell to hide her because she’s in danger. Wardwell agrees to help. Lucifer heads to Ms. Wardwell’s house as Father Blackwood corrupts her, saying the devil is nearby. Ms Wardwell gives away Adam’s (Lilith) location and Lucifer grabs her.

Chilling Adventures of Sabrina Season 3, Episode 6 closes with many events…

Zelda heads to Dr. Cee’s story to look for Hilda — she sees her transformation and Zelda asks for her to shoot her; the camera points away and a gunshot is heard.

With Circe in the dungeon, there are brief celebrations. Sabrina looks on at Harvey and Roz and then walks off. Sabrina bumps into Nick and he apologizes. He asks if they can be friends and Sabrina agrees — her face says otherwise. You can understand why Sabrina is hurt, she has sacrificed most of her time for Nick to make sure he was safe and in return, she got nothing back.

Lilith bathes Lucifer/Blackwood and starts a separation ritual. She puts them both to sleep and then wakes up Father Blackwood while Lucifer remains snoozing. She asks Blackwood for help, stating that she wants to make sure that they both stay alive once Lucifer is out.

It’s revealed that Zelda did in fact shoot Hilda, but there’s a purpose behind it. Zelda claims that Hilda should turn back normal once she rises from the cain pit. There’s little explanation for this so we have to kind of run with it.

Sabrina spends some time considering doing the cord-cutting spell to get rid of her feelings for Nick — she wonders if she still wants Harvey but at the same time she doesn’t want to hurt Roz. As she does the spell to remove her feelings, she cries — the candles burn.

“Chapter Twenty-Six: All of Them Witches” ends with Ms. Wardwell banging on the Academy’s door. Zelda answers believing it is Lilith and Ms. Wardwell goes into a rant about witches — “This is for Adam”. Ms. Wardwell shoots Zelda.

Zelda falls to the ground.

There are enemies in every corner in Season 3.