Tales from the Loop episode 2 recap – what happened in ‘Transpose’?

Tales from the Loop Episode 2, “Transpose”, is a broody, realistic body swap story where two boys decide to be each other for a day.

Tales from the Loop Episode 2, “Transpose”, is a broody, realistic body swap story where two boys decide to be each other for a day.


This recap of Tales from the Loop episode 2, “Transpose” contains significant spoilers.

Tales from the Loop Episode 2, “Transpose” presents a story we’ve seen many times — a body swap — but there’s something depressingly true about this one. This is what would happen if two “friends who’re opposites” decided to do it.

Danny and Jakob check out this object in the woods that looks like a sea mine. When Jakob enters the object, there’s this whooshing sound that suddenly stops and they both realize they have swapped bodies; initially, Jakob freaks out but then, after realizing it is really easy to keep swapping by using the object, they both agree to be each other for the day.

Jakob (as Danny) continues to paint the barn Danny was working on. Lauren heads over and shows him another barn. She kisses Jakob (as Danny) but their teeth clack. They kiss again and this time it isn’t as awkward. Later, in the shower, he checks out his temporary body. There’s a slight issue though; his sister speaks using sign language, so there’s a barrier. Jakob hears Danny’s parents arguing at night about Danny’s future.

The next day, Jakob (as Danny) is woken up by the father and he drops him off at school. Jakob and Danny meet up to discuss what has happened in each other’s bodies. Jakob raises how Danny’s mother keeps going on about the quarry — Danny says he is smarter than that and wants to remain in each other’s bodies for another day. 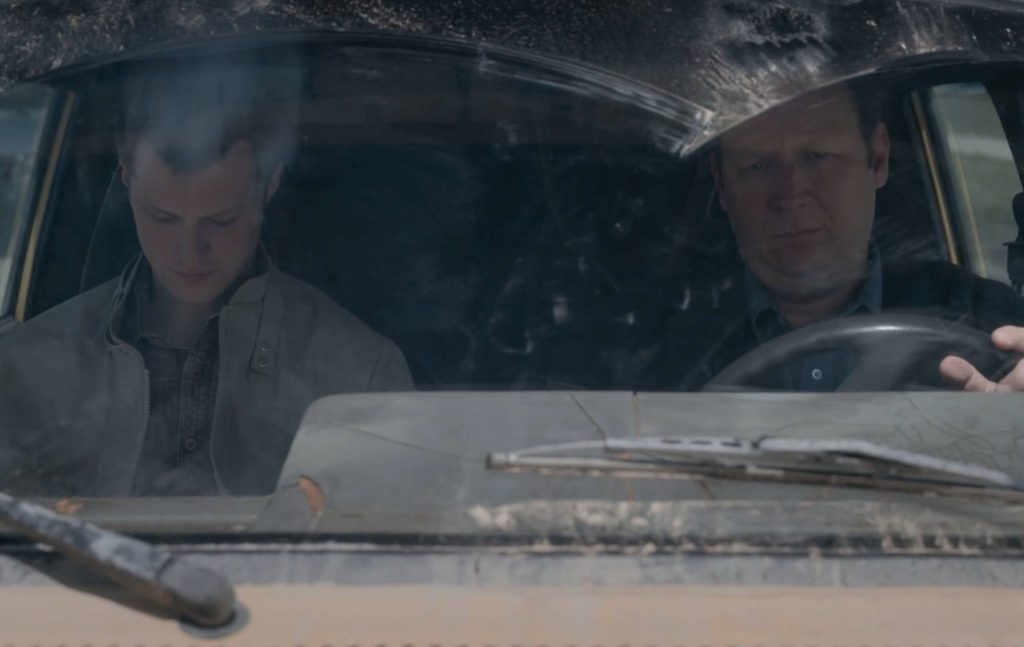 At the midway point of Tales from the Loop Episode 2, “Transpose”, Jakob (as Danny) is frustrated by the body swap, so heads to his actual house to see Danny (as Jakob). Jakob wants to switch back and be him again but Danny says he does not want to smash rocks for the rest of his life — they both start fighting and then Jakob’s father walks in and asks Danny to go home.

At this point, we are witnessing how Danny has become accustomed to a more introverted life where he is expected to be important at the Loop.

An upset Jakob (as Danny) enters the sea mine object to see if it swaps back. Afterward, no-one can find Danny in the town. Danny (as Jakob) gives May a drawing but then feels guilty, knowing that the real Jakob liked May. He goes looking for Jakob and checks out the sea mine object; when he looks inside, he screams for help. Jakob (as Danny) is in hospital on a ventilator in a coma. The parents are understandably distraught.

Danny (as Jakob) heads to the object and the construction men are dismantling it, losing all hope of swapping back. He meets his sister and uses sign language to tell her “I’m still here”. Danny (as Jakob) speaks to Jakob’s parents about wanting to work at the Loop and that he does not want to draw anymore. He suddenly gets emotional and tells them he misses his friend.

This is a strong second chapter.