We Summon the Darkness second opinion – drop your expectations and enjoy

A story of metalhead (or Satanist?) boys vs. girls in 1980s Christian America; perfect set-up for a slasher, but this is not so formulaic by a long shot.

A story of metalhead (or Satanist?) boys vs. girls in 1980s Christian America; perfect set-up for a slasher, but this is not so formulaic by a long shot.

We Summon the Darkness starts off as a coming of age drama but doesn’t stay that way. It looks like a standard teen slasher but really isn’t. It even appears like a lightweight Scream-style comedy horror in the advertising, but the tone is almost-but-not-quite serious throughout. There’s such a lot of duality going on in We Summon the Darkness, so many moments that it’s easy to wonder “what exactly am I watching?”, that I’m almost reluctant to tell you much about what it actually is and isn’t.

Because I really enjoyed having my expectations played with in this film; not so much about where the plot is going (though there are a number of – albeit mild – surprises), but the tone and style. That kept me switched on to what was in front of me… which unfortunately could not be said for the majority of people I was watching on the screen before me.

Three young women and three young men (all late teens or thereabouts, I would presume) travel to a rock concert; two separate groups of friends at first, who make friends together over a little play fighting and banter. They debate the merits of favorite artists, whether Metallica is still any good (the film is firmly set in the late eighties), and whether the recent “Satanic cult murders” in the news are anything to do with their beloved metal scene like the radio preachers seem to think. By the time they all agree to carry on the evening in private after the gig, we’ve gotten to know the six personalities pretty well, such as pouting Val (Maddie Hasson, God Bless America), newcomer to the group Beverley (Amy Forsyth, Channel Zero), superior Alexis (Alexandra Daddario, Baywatch) and modest Kovacs (Logan Miller, Love, Simon). Shortly after they settle into their after-party though, some hidden agendas are revealed. 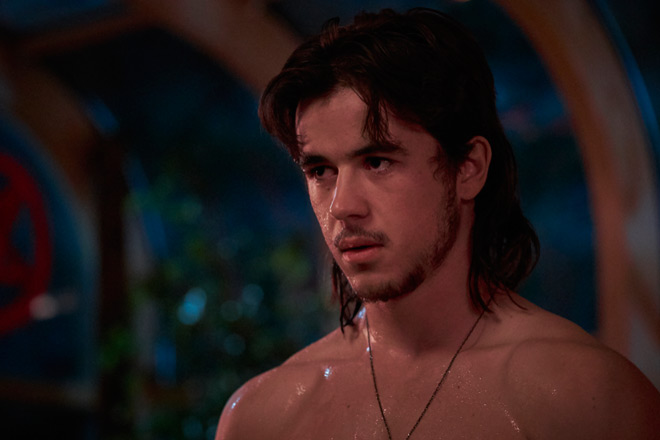 This is a suspense/horror film, rather than a Hostel-style extreme horror: there’s plenty of blood and a certain degree of torture, but the excitement is more about tension and a few surely-not moments, rather than explicit gore. There’s a body count, and as the protagonists lose grip of their “mission”, some somewhat farcical scenes, but the tone is more threateningly serious than, say, the sarcastic Final Destination. It’s not always clear who the audience should be rooting for (more so towards the end, mind you), and it’s a good job there are no predictable boobs or cheesy gags to distract one from considering the whole scenario… because the whole is entertaining but escalating chaos.

Sometimes when I’ve seen recent films set in the nineteen-eighties, it feels that the only reason for the period is so that there might be no cell phones to provide an easy plot device. We Summon the Darkness uses this period for good reason: the “Satanic panic” of that decade is not just part of the backdrop but is key to the narrative too. Writer Alan Trezza makes some rather sharp digs at conservative religion (particularly regarding corruption, and Christian phobia of heavy metal music and subculture), but without the consistent wit or humor to call it satire, and not at all heavy-handed.

I watched director Marc Meyer’s last big film, My Friend Dahmer, not long ago and this could have been a mistake: it was an impressive film, don’t get me wrong, but it meant I went into We Summon the Darkness with expectations that didn’t fit at all. Fortunately, I shook them off with ease: We Summon the Darkness has its own style. But I must say that having its own style does not suit every viewer: there are those who have watched this film expecting a teen slasher film with all the elements Scream told us to expect. But no, formulaic slashers belong in the past: We Summon the Darkness is set within the issues and culture of the eighties, but made now, by a contemporary team.