This recap of Control Z season 1, episode 2, “Victims”, contains spoilers. You can check out our thoughts on the previous episode by clicking these words.

Control Z episode 2 has two broad objectives. The first is to introduce Quintanilla, the National School principle, and Sofi’s mother’s new boyfriend, as something of a disinterested idiot. He spends most of “Victims” interviewing the various titular recipients of video exposure, and does little to help out any of them. Its second task, which it really succeeds at, is putting across a sense of escalating chaos and despair as several more students find their most private secrets revealed.

Thus, the episode opens with the offending videos — of Pablo exposing his apparently giant d*ck, of Natalia stealing money from the party fund for swanky handbags, of Gerry being into gay p**n, or Raul being… the wealthy son of a politician, I guess? — as it becomes clear that Isabella has taken her revenge. Good on her, really, since everyone in this show seems to be awful and deserving of torment anyway. The revelations are playing havoc at school, though somehow Gerry seems to be getting away with tormenting everyone else about their news as though his own wasn’t also exposed.

All the students in turn visit Quintanilla’s office; Sofi gets herself sent there intentionally so she can investigate. These sequences also include Lulu, Quintanilla’s assistant, who seems to be taking an undue amount of pleasure in these developments. Is she an early suspect? Luis’s mother, meanwhile, understandably furious about the way Gerry and his goons have been treating him, is unable to speak to anyone about it because of the focus on the hacker’s videos.

Control Z episode 2 has a good sense of the flip-flopping attitudes of high-school students as we see Isa be hounded in the toilets about which ones she should be using, Alex — who has had little to do thus far — defending her, and then Isa snapping at Alex. We see Nati try and justify her thieving from the NONA fund by insisting that if people are going to think she’s a winner she has to look like one. It’s a relatable concern, I guess, especially if upper-class posturing is your only currency. 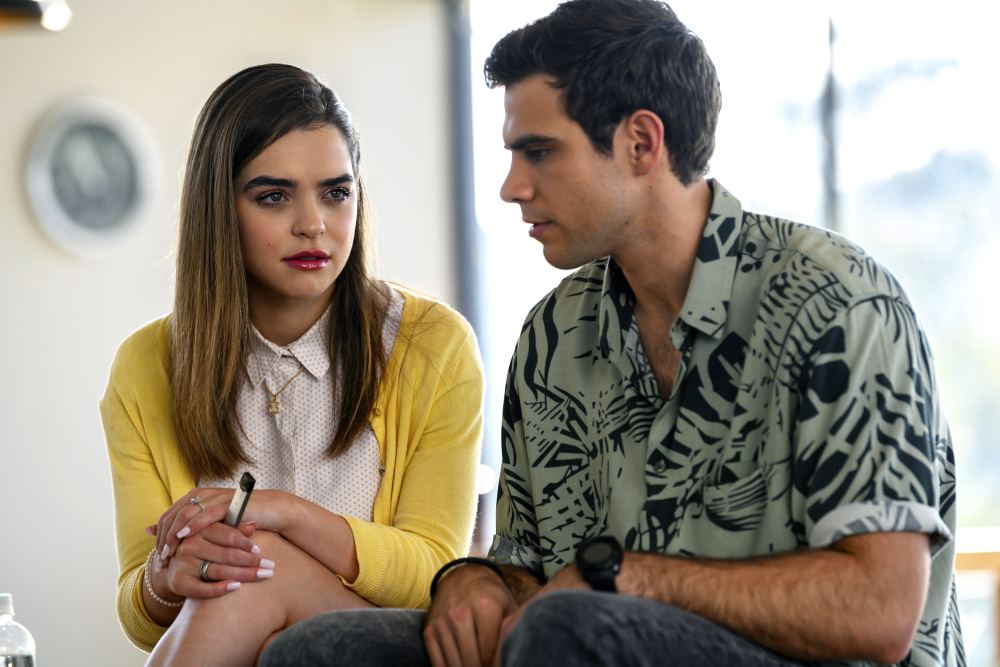 Sofi also takes Javier to meet Bruno in the IT department, where she pretends to have overheard Quintanilla planning to fire him so that he fesses up about the school’s longstanding security concerns. Everyone using the WiFi network was vulnerable — and one assumes that everyone was using the WiFi network.

Gerry and his goons continue to viciously pick on Luis in “Victims”, for absolutely no reason that I can fathom, and it takes a very nasty turn here when Gerry spits in his face. When Gerry’s girlfriend Rosita leaves him for being gay — or for people thinking he’s gay, it’s kind of unclear — you can’t help but cheer a bit. I hope he continues to get further comeuppances throughout the season.

Nati, meanwhile, has lost her purse and suspects the aforementioned Rosita in the crime. It seems a much less pressing one, given the current circumstances, especially since Sofi gets a message from the hacker claiming that he (or she) knows her secret. Something to look forward to. In the meantime, Control Z season 1, episode 2 ends with something of a blowout. When Luis’s mother, Martha, is finally able to corner Quintanilla, she goes absolutely ballistic about how her son has been treated and how little has been done about it. He’s mortified, and in his panic he claims to be the hacker. The likelihood of him actually being the hacker currently stands at around 0.01%.

Nevertheless, “Victims” ends with a montage as we see the secrets cause turmoil in the students’ home lives, and Sofi gets another message. She and the hacker are going to meet soon.