“Birthday Girl” makes for a functional if unimpressive opener, loaded with cliche, but its ending suggests some soapy promise.

“Birthday Girl” makes for a functional if unimpressive opener, loaded with cliche, but its ending suggests some soapy promise.

You can just tell that Control Z is about technology and social media and such since it’s one of those shows that superimposes text message chains and emojis on the screen whenever anyone uses a phone — which is all the time. In the opening scene of “Birthday Girl”, as Sofia roams school corridors that are virtually exploding with these things, you can tell she’s somewhat apart, more detached from the trends and hashtags and whatever else. Yet she knows more than most, at least judging by how she intervenes in Gerry and his clique bullying Luis — though that might be because they’re right in front of her locker.

Sofia has problems with everyone. She lost her father. Something — we’re treated to scattered, unclear flashbacks — happened last year. And to make matters worse her determined rebellious loner image is put under some duress when she’s immediately teamed up on a project with new kid Javier.

Javier seems like a nice guy. Early in Control Z episode 1, he joins Sofia on the glass roof of the very unusual looking National School because he thinks she’s going to kill herself. Up there, we get another demonstration of Sofi’s Holmesian deductive reasoning. It also works as a good introduction to the various students.

Among them, Gerry and his goons are most immediately detestable; they pick on Luis again, and Gerry urinates on his backpack and drawings. But rich kid Raul, who intervenes in the ordeal and palms Luis some cash for a replacement bag, hardly seems much better.

As a matter of fact, nobody in this school seems very likable at all. That’s probably why someone hijacks a school presentation and uses it to reveal that Isabella is transgender. She’s the first student to have her personal information publicly disseminated, but she won’t be the last. 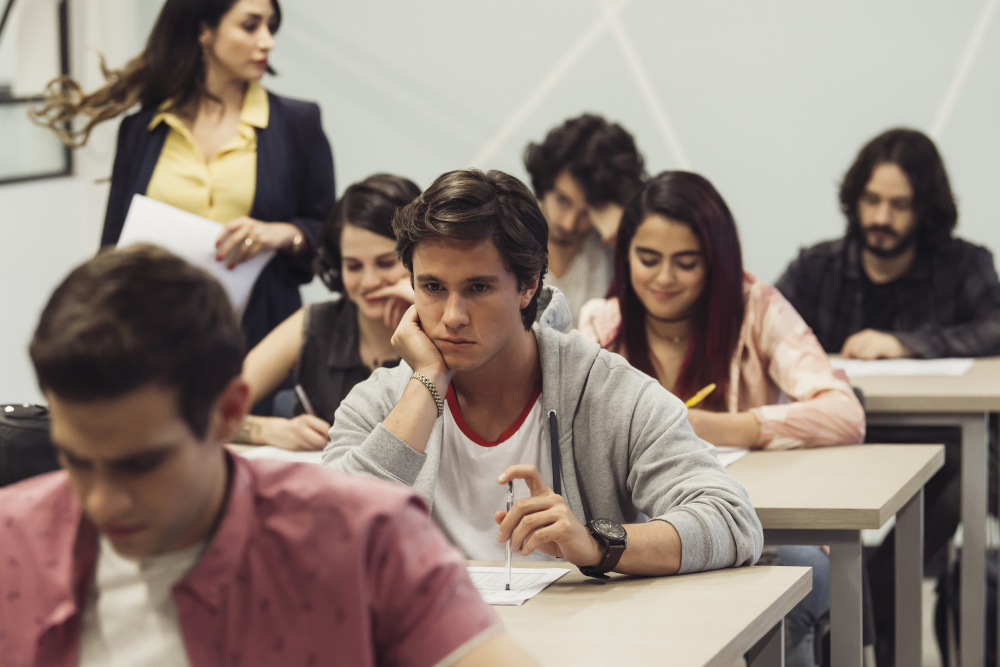 Control Z episode 1 really kicks into gear after this. Isabella is devastated, and while her friends take it relatively well at first, Gerry and his crew seize on the news and begin to incessantly torment her. Her boyfriend Pablo insists he feels betrayed.

“Birthday Girl” has some truly leaden dialogue and not a particularly fresh-feeling setup, but what it nails here is that sense of escalating social embarrassment. And it quickly becomes apparent that Isa isn’t the only victim. Raul and Natalia are both being blackmailed too. Sofi confronts the latter in the bathroom; she’s the only one who stole Isa’s phone.

Sofi’s unimpressive detective skills — basically just obvious observations — lead her to deduce what happened very quickly, and she’s basically proved correct by episode’s end. She also solidifies her team-up with Javier by exchanging numbers, since he has people skills and might be useful. To be fair, Sofi seems pretty charismatic herself, but her hazy flashbacks to institutionalization and self-harm scars suggest she’s not really a people person.

To close out Control Z season 1, episode 1, Isabella gets a message from the “@allyoursecrets” account asking if she’d like revenge on those who wronged her: Raul, who picked her; Natalia, who stole her phone; Gerry, who uploaded the video; and Pablo, who betrayed her. Well, of course she would.

This was, really, a pretty lackluster opening episode, leaning far too heavily into played-out tropes. But the ending promises soapier, more entertaining things to come, so let’s not write the show off too quickly.