“Revenge Tokyo” leaves the Baki conflict to tug some loose ends from previous seasons in an odd choice for a finale.

“Revenge Tokyo” leaves the Baki conflict to tug some loose ends from previous seasons in an odd choice for a finale.


This recap of Baki season 3, episode 13, “Revenge Tokyo”, contains spoilers. You can check out our thoughts on the previous episode by clicking these words.

With the fight between Baki and his father presumably shelved for another season, Baki season 3, episode 13 elects to tie up some loose ends from previous seasons in “Revenge Tokyo”, a side story in which Inspector Sonoda attempts to track down missing death row inmates after the notorious Ryukoh Yanagi makes a bloody escape from prison.

We get lots of stylized cutaways explaining Yanagi’s backstory and escape, and this technique persists throughout “Revenge Tokyo” as Sonoda’s investigation continues. The inmates all have terrible violence and evil in common, and most are also united in having been handily defeated by major characters. We do get to check in on Dorian, though, painting demented pictures of candy while in a deep squat, which I suppose is on-brand at the very least. Dorian has gained 20kg in pure leg muscle as part of his “rehabilitation”. Is he planning something?

Next up: Doyle, who is not only blind but ruptured his own eardrums. (All the inmates are introduced with, “… also one of the strongest and most evil death row prisoners.” Like, we get it.) Why would a blind man have deafened himself? We get a flashback to Doyle justifying it by claiming that he gains something in his abandonment of the senses. He also apparently did something strange in his cell — caught a bat. When he did so, he made a weird comment about skin, having gained a keen sense of touch. But for what purpose? 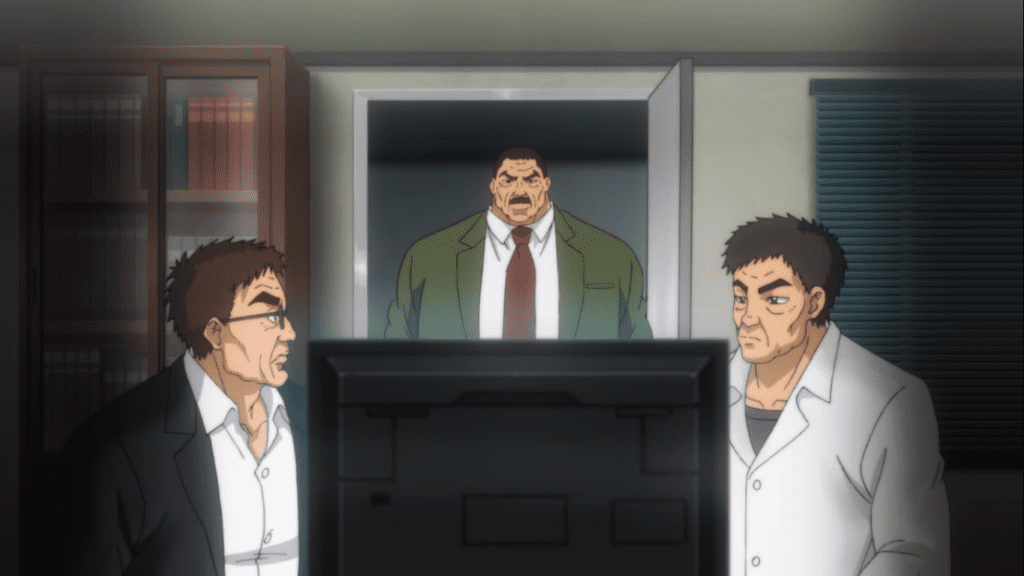 Sikorsky, who we’re helpfully told is also one of the strongest and most evil death row inmates, is next on the itinerary. He’s also on weirdness, using his extreme pinching power to ball up nickels. Something is afoot in “Revenge Tokyo”!

Next: Spec (you’ll be surprised to learn he’s also one of the strongest, most evil death row inmates.) He’s now bedridden after experiencing rapid aging — he’s basically a skeleton. But a thermographic reading shows all of his muscles working. He flexes repeatedly, all day long. He’s apparently swimming the butterfly; a super-weighted butterfly, because of course.

It looks like strict vigilance and investigation will be needed. Baki season 3, episode 13 ends with all the death row inmates, who’re apparently strong and evil, eerily laughing.