13 Reasons Why season 4, episode 3, ” Valentine’s Day” turns into a strange but entertaining thriller as our lead character is spooked.

13 Reasons Why season 4, episode 3, ” Valentine’s Day” turns into a strange but entertaining thriller as our lead character is spooked.

Episode 3 begins with Clay getting disturbing phone calls over and over again. Clay narrates about Valentine’s Day and the Love is Love dance and how love at High School is not real. Clay answers the phone again and the person says “answer when we call and learn”. As Clay is distracted, Ani is hinting that she wants to be asked to the dance. Clay walks off and the phone rings again; he believes that the person who is calling him is Winston — when they ring again, they state that Monty is innocent. Clay ends up locked in the photography room and… freaks out again. Tyler helps him out.

When Clay answers the phone in the cafeteria, the person on the other end tells him to start a fight in the next five minutes. Clay asks Zach to hit him and calls him a p***y. Zach kicks Clay in the balls and tells him to sort his sh*t out. The phone rings again and the person on the other end says he is impressed. 13 Reasons Why season 4, episode 3, “Valentine’s Day” has turned into this deep paranoia thriller that we weren’t expecting.

Being a human being

Clay sorts himself out briefly and uses a comic he drew to ask Ani if she’d like to go to the dance. But then he’s distracted again as he receives a photo of himself on his phone. He rings the number and hears a ringtone. He approaches one of the students and takes off her phone and says “I got you!”. Ani gets him out of an awkward situation and Clay tells Ani that someone has Monty’s phone and they are claiming to have proof. Ani calms him down — “We’ll figure this out”.

Tony tells Clay that Tyler is lying about his shifts and is speaking to Headmaster Boland. They ask Tyler where he’s been but he has a legitimately good answer. 13 Reasons Why season 4, episode 3, ” Valentine’s Day” shows Tony trying to keep it together as well.

Alex and Winston go bowling together as their bond grows closer. Winston raises how Clay is freaking out because his phone keeps ringing. Alex asks Winston if he wants to go to the dance with him “as friends”. Alex kisses him.

Clay’s phone rings again and they tell him they know Ani is a fake alibi. Clay responds that he didn’t kill Bryce and asks what the person wants. The person on the other end gives him the location of Monty’s phone. Clay finds the phone and it rings and it’s the same person on the phone again — they are playing with Clay’s head, stating they’ll call him again at the dance. 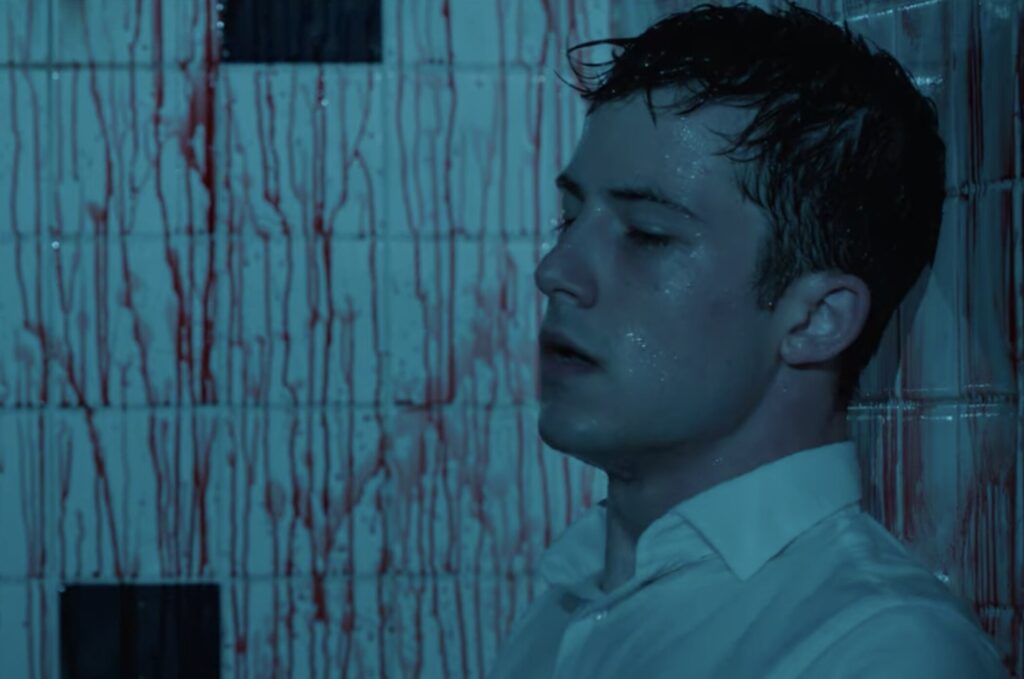 Have you ever been in love?

Therapist Ellman asks Clay if he’s been in love before. When Ellman raises Hannah Baker, Clay makes out that love is a lie. Ellman wonders if Clay does believe in love but loves so fiercely that it hurts. Clay believes that we are all alone. 13 Reasons Why season 4, episode 3, ” Valentine’s Day” reveals that Clay is truly suffering from the actions of his past.

One of the football players at the dance calls Jessica amazing and admires her activism — “If you really want to make Justin jealous, you know where to find me”. The dance is in full swing. Clay tells Ani that she looks beautiful and they dance closely. As they kiss, his phone rings — “Kiss her one more time before its too late”. Ani asks Clay what he wants — Clay says he wants a stupid, boring f*cking life. His phone rings and the person tells him to leave the dance immediately. Meanwhile, Zach starts kissing another girl at the dance — Justin tells Zach to calm down as other people are watching. Justin then sees Jessica kissing the football player and tries to intervene as he’s clearly jealous. Jessica states she is lonely and starts kissing the guy again.

Tyler has to take care of something

Tony follows Tyler outside and sees him get in a car with one of the cops. Clay enters the changing room, and the person on the phone describes Monty’s situation in prison and then Clay sees blood all over the shower walls. Suddenly, the showers start spraying blood. Clay gets his breath back eventually and stands up while picking up a knife.

Clay walks on to the football field and the person on the phone says “you found me”. Clay finds Monty bleeding out. Monty dies and Clay is distraught — “I’m so sorry”. Clay turns around and sees Bryce: “Who’s the monster now?”. When he focuses back on reality, he’s surrounded by the entire football team who tell him “we own you” and they all walk off — apparently it was a prank and the dead person in the middle of the field is a dummy with fake blood. The football team knows Clay has something to hide. When he returns to the dance, everyone sees the fake blood on him. Ani says, “You are right, I can’t fix this”. Tony looks behind at the security camera. 13 Reasons Why season 4, episode 3, ” Valentine’s Day” turns into a strange but entertaining thriller as our lead character is spooked.