Home » Film » Peripheral review – more style than substance, but with a great electronic soundtrack and a satisfying ending

Peripheral review – more style than substance, but with a great electronic soundtrack and a satisfying ending

British sci-fi horror about the connections between a writer and her computer, from director Paul Hyett.

British sci-fi horror about the connections between a writer and her computer, from director Paul Hyett.

I like a good sci-fi horror: Videodrome and Hardware were two coming-of-age films for me. So Peripheral, the latest film directed by Paul Hyett (Howl, Attack the Block) drew me right in. It’s about Bobbi Johnson, a young author struggling to get going with the draft of her second book when her publisher persuades her to try some new “hardware” (instead of her beloved but archaic typewriter) which will give her a leg up. But as she gets closer to her deadline, she and her new hardware (with its various add-ons and upgrades) become steadily more connected.

Hannah Arterton (Safe) played Bobbi, and being on the screen nearly all the time, she did well in holding the film together. She was believable as both a creative and a Luddite, as someone wary of her fame and confident with her work; and Arterton was just as strong when her character wasn’t, when her deadline and her cabin fever became too much. If only the quality of the dialogue hadn’t come close to tripping her up once or twice.

As well as her deadline, Bobbi found herself under pressure from almost everyone else in the film: her number one fan/apostle Shelly (Rosie Day, The Seasoning House), and her publisher Jordan (Belinda Stewart-Wilson, The Inbetweeners); her ex-boyfriend Dylan (Elliot James Langridge, Northern Soul, Hollyoaks), and even her most-admired writer Gilmore Trent (Tom Conti, Shirley Valentine). The only person who seemed more laid-back was the bloke who came to install all her kit… but maybe he provided a more subtle influence, on behalf of the company. 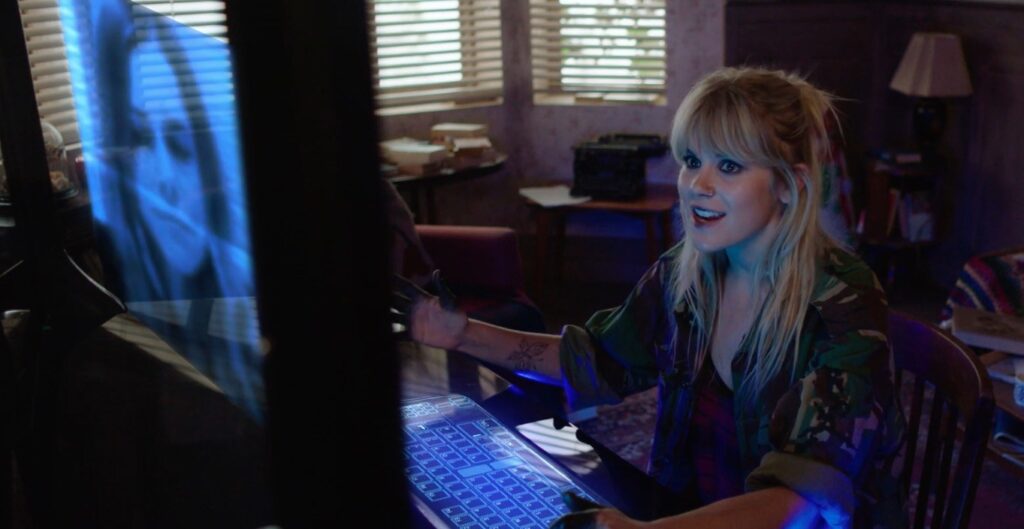 The visuals and the music are what kept me engaged. Surreal colors flowing like blood between organs, or like signals between neurons took over the film as the computer developed; especially interesting because it wasn’t clear whether these represented Bobbi’s feelings or the computer’s. Their abstract nature certainly indicated (along with an odd plot development towards the end) that not everything we saw was truly happening; I might have had a problem with how over-the-top and futuristic the hardware looked if it wasn’t for that (the neon/transparent/bleeping features likely symbolizing what a radical change of working style this meant for Bobbi).

The music by Si Begg (Lovesick, The Virtues) was superb, though. His electronic score drew me into the story, into Bobbi’s frame of mind; and it fitted well with the way she was drawn steadily closer to the technology.

The ideas in Peripheral, about people’s connections with each other via tech, and the way companies can influence people were drawn out well through the story. But the dialogue left a great deal to be desired: sometimes it felt like sentences just didn’t fit together, or that pieces of the script had been cut out to make it fit the desired length. It really could have done with being redrafted – or at least smoothed out – once or twice more; which is a real shame, because the cast was great, and the production cleverly done.

There lay another little problem, unfortunately: although the sets and effects were carefully and cleverly done, sometimes they seemed a little too polished, making the sci-fi elements a little too unreal. Perhaps that unreal texture was deliberate, but personally, I prefer my sci-fi to be more gritty and grimy (like in another British film from a couple of years ago, Await Further Instructions): if I can feel it more, I can believe it more.

I won’t leave you with a down note, though: I liked Peripheral’s ending a lot.