“Marriage/bonds” was a surprisingly weak filler episode that veered away from the much more compelling main arc, exposing a lot of the show’s underlying flaws.

“Marriage/bonds” was a surprisingly weak filler episode that veered away from the much more compelling main arc, exposing a lot of the show’s underlying flaws.


This recap of The God of High School season 1, episode 4, “Marriage/bonds”, contains spoilers. You can check out our thoughts on the previous episode by clicking these words.

“Marriage/bonds” stands out as a clear weak link in The God of High School’s first season so far; basically a filler chapter than veered away from the main tournament arc for a subplot in which Mira almost got married. There was a vague point to it, which was to dig into Mira’s backstory a little more, but at this stage in the season – we’re only four episodes in! – this kind of diversionary tactic seems deeply suspicious and mostly just works to highlight the show’s flaws (read those as anything that doesn’t involve fighting).

Not that I even mind Mira, or indeed Daewi, who gets some of his own development very late in The God of High School episode 4, but feels underserved here all the same. But I’d humbly suggest that character isn’t exactly the strength of this show, and since “Marriage/bonds” strips away a lot of the action, that fact is brought into even starker relief than usual. 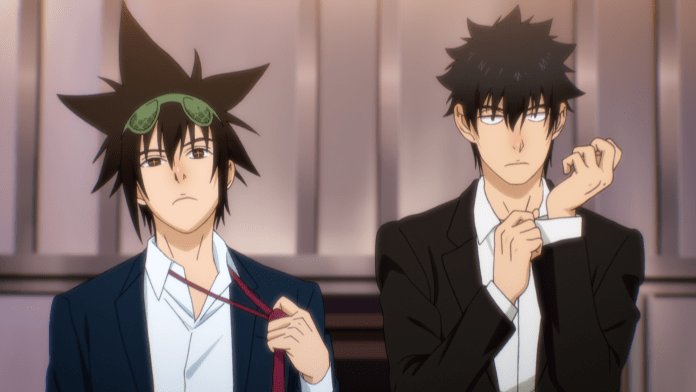 Without the tournament fighting, the madcap enthusiasm for various martial styles, and the enjoyably kinetic action animation, The God of High School episode 4 felt flat. The presence of Seong-jin, ostensibly one of the world’s strongest martial artists, a proponent of a style that lent itself perfectly to a duel with Mira, and a member of the nebulous group which forms the primary antagonists, virtually demanded a fight. But it never came, beyond a cheeky slap. A potentially intriguing opponent was reduced to a very muscular way of Mira making a point.

But it is enough to injure Mira, which allows Daewi to more easily beat the brakes off her in the tournament’s semi-finals. This is the culmination of his own sort-of subplot, in which his friend with cancer dies and he goes ballistic, but it was still a weird moment when he stoved in the female lead and muttered to Jin that he’d see him in the finals. We know on some level that the power of friendship will probably pull him back to the side of moral good in due time, but that’s quite a thing to have to apologize for.