“Ronde/hound” returns The God of High School to form, delivering its best fight and episode yet.

“Ronde/hound” returns The God of High School to form, delivering its best fight and episode yet.

This recap of The God of High School season 1, episode 5, “Ronde/hound”, contains spoilers. You can check out our thoughts on the previous episode by clicking these words.

You’ll recall that in the last episode of The God of High School, which wasn’t very good, Daewi beat the brakes off of Mira. It was a weird scene to cap off a really weird episode, and one of the first things The God of High School episode 5, “Ronde/hound”, does is try and justify it. We already knew that his bestie, Woo Seungtae, was suffering from a serious incurable disease which I assumed was cancer but which might be something else; here we learn that Daewi is fighting to fund potentially life-saving treatment for him.

I can respect this motivation, even if I think it’s a bit difficult to reconcile with repeatedly punching a young bespectacled woman in her existing injuries. Then again, “Ronde/hound” makes a huge deal of how close these two supposedly were, deploying frequent flashbacks that help to explain their relationship, some of which boast an admirable storytelling economy. Much like how the last episode focused on Mira, this one really belongs to Daewi, his backstory, and his motivations. 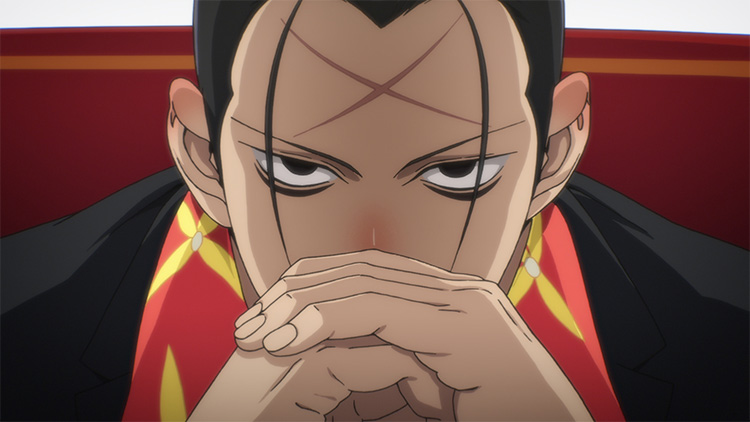 But it also requires that we get Jin opposite him in the finals, so we have a brief scene of Jin handily besting Byeon Jaehee, a Brazilian jiu-jitsu expert who shows off that grappling art by only trying to strike – perhaps this show isn’t as well-researched on the martial arts front as first thought. Nevertheless, Jin makes it through to the finals and is fuming with Daewi about taking advantage of Mira. Their fight goes on ages, and during it, Daewi learns that Seungtae has died.

This news makes emotion integral to the fight between Jin and Daewi, which is also, not coincidentally, the most evenly-matched fight thus far, and one of the best in terms of its animation. For one thing, it feels like it actually means something to the tournament itself and to the characters; thus far there hasn’t actually been a lot of tension in the fights since we could easily predict the outcome or didn’t care about the combatants. The overall tone is, I think, best described as sombre.

The God of High School episode 5 works pretty well in this mode. There’s a lot of character in the fight animation; it isn’t all flash, but a genuine expression of emotional sentiment. It means something. That’s really the highest honour you can bestow upon a fighting anime; “Ronde/hound” makes the fighting matter on every level. It’s a great return to form after a lacklustre episode last week and proves that there’s still some life in this show, even despite its weaker elements.