Selena + Chef review – Selena Gomez learns to cook in lockdown, with some help

With the help of her friends and family, some professional chefs, and a HBO Max production, Selena Gomez learns to cook with mixed results.

With the help of her friends and family, some professional chefs, and a HBO Max production, Selena Gomez learns to cook with mixed results.

Every episode of Selena + Chef opens the same way: With the singer and actress turning on the cameras in her very nice kitchen while explaining in voiceover that she loves to cook but isn’t very good at it. This new streamer, which airs from Thursday, August 13 on HBO Max, proves the latter point but raises some questions about the former. As it turns out, Selena can’t cook very well – but she doesn’t seem to enjoy it much either.

Both of these things turn out to be in the show’s best interests. Selena isn’t so bad of a cook than it seems like a put-on, but she’s just bad enough that it’s funny. And the fact she doesn’t know where anything is or how anything works and clearly has a hard time being snappily told what to do by a no-nonsense Frenchman helps to humanize her. It’s easy to forget, sometimes, that rich and beautiful celebrities are just normal people with more money and better cosmetics, and the kitchen is a good place to be reminded of that. In there, all the Disney bonafides and Platinum-selling albums in the world won’t cook the inside of your cheese soufflé.

Filmed during lockdown, Selena + Chef works thusly: Selena is shacked up in a swanky new pad – we’re reminded it’s new several times, mostly as a justification for why she can’t work the oven or find the cilantro – with her Nana and Papa and her upbeat best friends Liz and Raquelle, who occasionally take on a sous-chef role but mostly sit around waiting for the food to be ready so they can snaffle it all and declare, “Selena, you’re a chef!” In each episode, a guest-starring Los Angeles restauranteur beams in via absurdly high-definition video call to take Selena through some upscale recipes while sharing bits and bobs about their lives, careers, and approach to cooking. 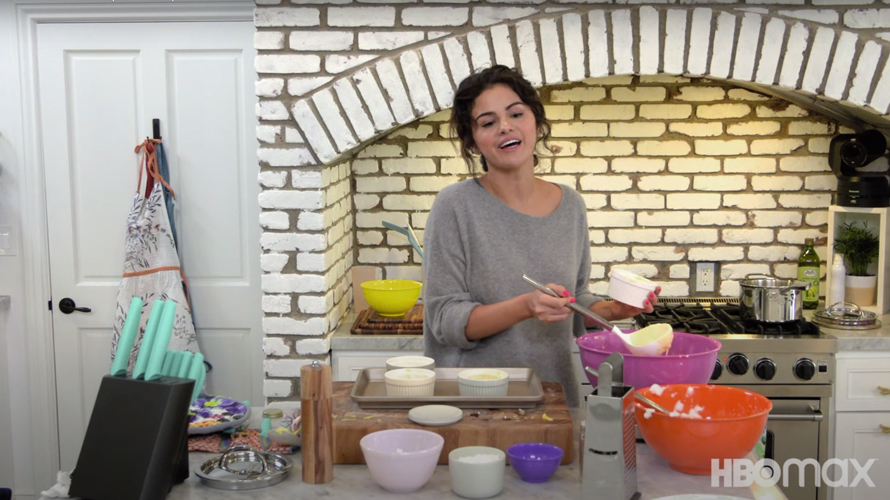 At just 25 minutes an episode, there isn’t much space to learn a lot about the guest chefs or even, really, about the tokenistically cultural dishes being prepared. In the first episode sent to press, Selena makes a classic French omelet, and in the third, she makes Candice Kumai’s Japanese grandmother’s spicy miso ramen; in all three, though, the conversations are firmly rooted in hip high-end California dining, with brief asides about health-conscious wellness culture, what Selena has been up to in lockdown, and her tumultuous love life.

This pally attitude and narrow focus often make Selena + Chef feel a bit too insular for its own good. It doesn’t have the kind of energy and enthusiasm for different cultures and experiences that the best cooking shows do, and without a competitive format, whether or not Selena does a good job isn’t really an issue. Perhaps that isn’t the point, but if it isn’t, you have to wonder what is – there’s similarly little time to unpack Selena as a pop-cultural figure since she’s always so flustered about whether she’s burning her cookies. But her hapless charms are reliably amusing. At first, I thought her constantly fretting over not having ingredients was an act, since we know she has everything or there wouldn’t be a show, but it quickly becomes obvious that she just doesn’t know where stuff is, which I think we can all relate to.

And at least there’s a charitable aspect. Each chef comes with an altruistic organization that is important to them in some way, and Selena always makes a point at the end of each episode that she and the show are donating ten grand. But this stuff also inadvertently leads to the juiciest Selena material, such as when she references her own bipolar and close relatives with addiction issues. I’m not expecting some kind of tell-all exposé in a lightweight, frothy half-hour cooking show, but knowing the ingredients always helps.