The Owners review – not just another home invasion movie

A horror/thriller in the “youth vs. elderly” mould, but much more original and unusual than it first appears. A French team and British cast provide a strong pedigree, and an eccentric film for offbeat genre fans.

A horror/thriller in the “youth vs. elderly” mould, but much more original and unusual than it first appears. A French team and British cast provide a strong pedigree, and an eccentric film for offbeat genre fans.


The Owners is about Nathan, Terry, and Gaz, three young layabouts who reckon they can make all their worries go away when they hear that there’s a safe full of money in the large house nearby. With Nathan’s girlfriend reluctantly in tow, they break into the house when Dr. and Mrs. Huggins are out for the evening. But when the elderly couple return, everything changes.

Julius Berg (La forêt) directed The Owners, and also wrote it with Matthieu Gompel, based on the graphic novel “Une Nuit de Pleine Lune” by Yves H and Hermann. Yet it is a thoroughly British film. This hybrid nature gives The Owners a very intriguing style; somewhat unbalanced, somewhat surreal, and deliciously twisted as the story progresses.

Let me start – as the film does – with the four friends. Terry (Andrew Ellis, This Is England ’90) is more needy than capable, but he’s there because he’s the one who found out about the safe. Nathan (Ian Kenny, Dublin Murders) is desperate for the cash and knows someone who can crack a safe. Gaz (Jake Curran, Spotless) knows all about safes – electronic ones, anyway – but doesn’t care much for these amateurs. And then there’s Mary (Maisie Williams, Game of Thrones), who doesn’t want to be there at all. They all present very distinct and well-drawn characters and seemed so natural that it was easy to forget I’d seen a face or two before. Curran in particular deserves to get some bigger parts after this one. 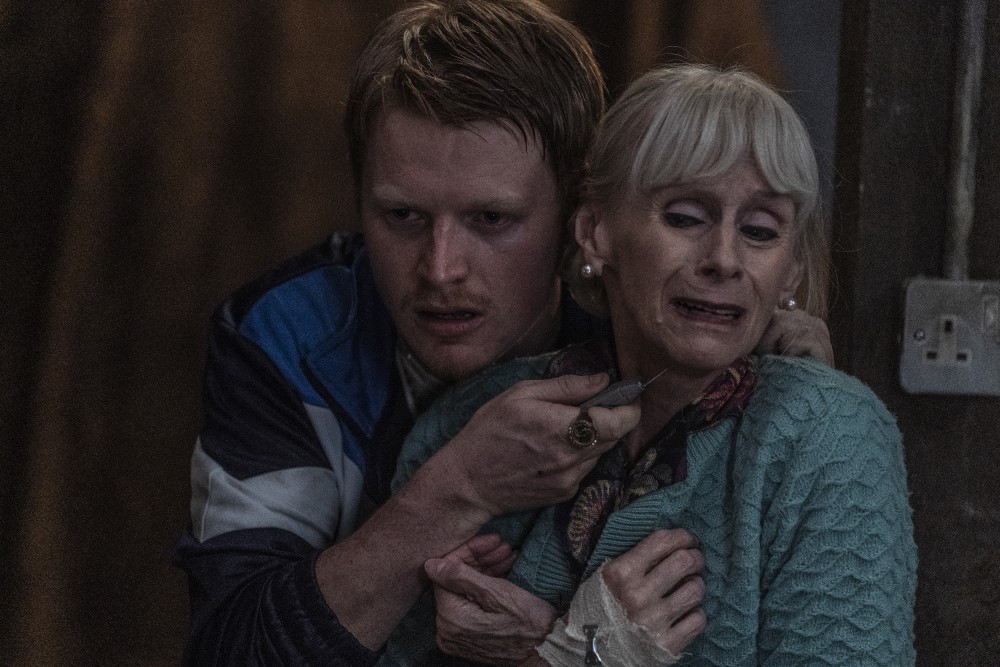 The eponymous Owners of the house are very established figures on the British screen. Rita Tushingham (A Taste of Honey, and many others including this year’s drama The Pale Horse) plays Mrs. Huggins and she is an absolute loopy delight; must have had such a ball with this role. Then there’s Sylvester McCoy (Doctor Who, etc.) as Dr. Huggins, who seems to be able to gaze inside each person’s mind with an idle glance. These two… well, did you ever see Shyamalan’s The Visit? There was a moment when you weren’t sure if there was something “off” with the elderly couple, and then another moment when you were sure… just the same here, but – dare I say? – more so.

So although my description above might sound like another Don’t Breathe, this film takes a very different direction; several, in fact. The Owners appears fairly lightweight at first, then becomes hectic, mysterious, unpleasant, and surprising. There are a few possible strands which do not get explored (and I’d love to know if they do in the original book), but these add to the mystery, rather than confusion.

The Owners may not have a terribly inspiring synopsis, and you may think it sounds unoriginal, but this is definitely one for fans of tense and quirky genre films. Personally, I’d love to read the book now, except it doesn’t appear to be available in English.