Episode 2 is an improvement; its themes of poverty and family life take hold and there’s some emotional engagement to enjoy with the characters. Hopefully, it will get better from here.

Episode 2 is an improvement; its themes of poverty and family life take hold and there’s some emotional engagement to enjoy with the characters. Hopefully, it will get better from here.

We will be recapping every episode — check out and bookmark the archive.

Episode 2 returns to the scene where Hye-jun asks Jeong-ha if she is a fan of him. In an awkward back and forth, Jeong-ha says she isn’t his fan and she supports Hae-hyo. In the next scene, Hae-hyo learns off his mother that he got the role in the movie. Hye-jun tells Jeong-ha that Hae-hyo is a good man –he asks her if they can speak casually. Jeong-ha realises at this moment that Hye-jun has an ability to connect with people. She’s gone from fangirling him to feeling like she can understand him on a personal level.

Record of Youth season 1, episode 2 reveals that Hye-jun has an intense admirer in his life to add further depth to his story. After the catwalk modelling show, Hye-jun asks if he can be paid directly and fast. His financial woes are still impacting him. A man at the fashion show takes an interest in Hye-jun and flashbacks reveal that this man has intense feelings for him, however, Hye-jun does not wish to reciprocate. In the present day, this man offers Hye-jun money and offers to be his agent and sponsor him. Hye-jun rejects his offer.

Hye-jun’s father is having health problems from overworking and the family is worried. The father is clearly worried about Hye-jun as well who might be joining the military. He’s relying on weak heat patches for the pain on his shoulders — it’s turning into a chronic condition. He refuses to go to the hospital. Episode 2 demonstrates the wealth gap in the story and how poor families have no choice but to sacrifice their health due to hardship. If the series continues with this type of theme, it will do well.

An Jeong-ha and Hye-jun casually talk after the fashion shows. They talk about fans and she gets passionate when Hye-jun starts claiming he’s a “Nobody”. She doesn’t want him to belittle himself. When they leave the building, Hye-jun gets An Jeong-ha’s number. There’s clearly chemistry between both characters. It dawns on Jeong-ha that she’s just had a real conversation with her idol.

Hae-hyo is feeling guilty that he got the role in the movie and doesn’t know how to tell Hye-jun. He asks his friend Jin-u to tell him. Hae-hyo and Hye-jun watch Korea in international football at a bar afterward with Jin-u. As the group walks home, Hae-hyo tells Hye-jun that he got the role for the movie — Hye-jun is drunk and walks off — he’s upset. However, the three friends continue to drink the night away and go to a Karaoke bar. Hye-jun is desperate to live a good life and themes of the wealth gap with his friend start shining through in the story, coupled with the family pressure of achieving sustainable living. If he fails to make a career in acting, it’s over for him, whereas his friend is able to take risks. 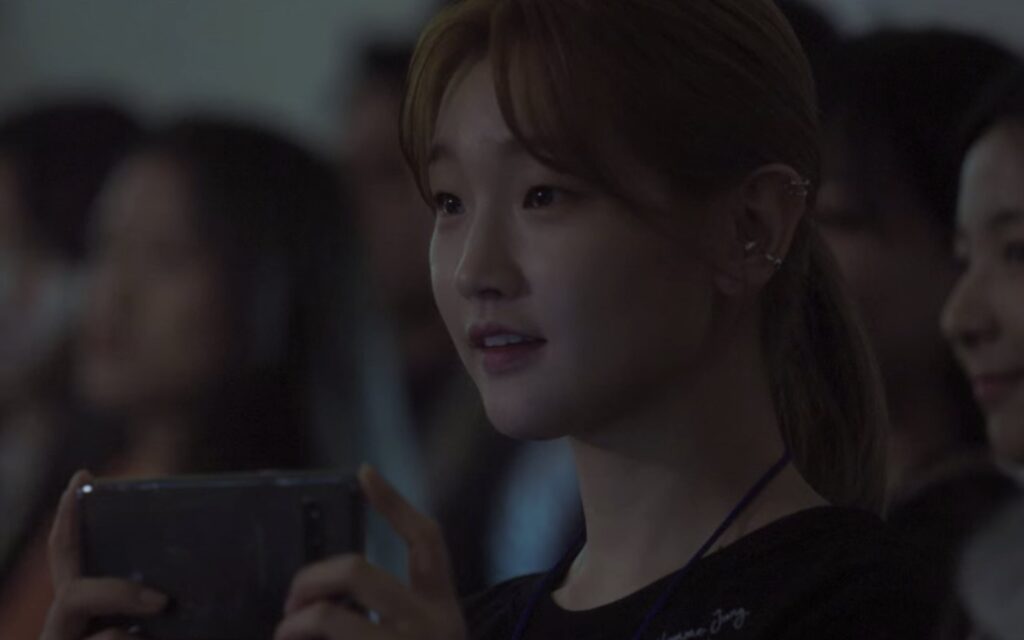 Hye-jun finally gets home and his father asks why he’s drinking. He lectures him about making money for the family and feeding them. Hye-jun admits to not getting the role and his father asks him to go to the military — he then gets upset that his family does not have his back and he expects comforting, not asked to enlist in the military. His grandfather then enters the conversation and sticks up for him. The grandfather ends up breaking one of the doors. After the big argument, Hye-jun’s grandfather apologizes to Hye-jun for causing more trouble. Hye-jun thanks him for taking his side. Both characters get upset, the stresses of hardworking and poor family life is taking its toll.

The next day, Min-jae has good news for Hye-jun. She has taken over as his agent and has an opportunity for him, however, Hye-jun cannot afford the plane tickets and he expresses that he’s joining the military. She seems shocked by his news.

And then Hye-jun visits the man that is in love with him and rejects his offer. The man tries to offer lunch for Hye-jun but he declines which makes him emotional about the situation — the man starts criticizing Hye-jun’s career and finances and compares him to his friend Hae-hyo. Hye-jun tells the man to remember this day as he was polite.

A ticket to Milan

Min-jae has bought Hye-jun tickets to Milan so now he has no choice but to take the modeling opportunity she’s found for him. It’s Min-jae’s first time on a plane. They both arrive at the fancy fashion show and Hye-jun walks the catwalk confidently. Min-jae genuinely wants Hye-jun to do well. Hye-jun suggests that she’s in love and she states she loves the process, not him.

Hye-jun shares that he doesn’t want to quit but it feels logical. When he returns to Korea, Hae-hyo and Hye-jun visit An Jeong-ha at the salon. Hye-jun embarrasses An Jeong-ha by claiming she’s a fan of Hae-hyo. When she’s talking to Hae-hyo privately, An Jeong-ha admits she’s actually a fan of Hye-jun. She seems content at being friends with both of them. As the episode ends, Min-jae tells Hye-jun that Hae-hyo got the role over him because he has more followers. Late at night, Hye-jun tells An Jeong-ha that he’s joining the military. There’s a silence between them.

Episode 2 is an improvement; its theme on poverty and family life take hold and there’s some emotional engagement to enjoy with the characters. Hopefully, it will get better from here.