Home » Streaming Service » Netflix » The Gift season 2, episode 1 recap – nothing was the same

The Gift season 2, episode 1 recap – nothing was the same

The second season of The Gift gets off to a suitably mysterious start as Atiye finds herself in a new reality where nothing is quite the same as it was before.

The second season of The Gift gets off to a suitably mysterious start as Atiye finds herself in a new reality where nothing is quite the same as it was before.


This review of The Gift Season 2, Episode 1 contains spoilers.

The second season of The Gift wastes no time in getting back on-brand, as we see Atiye running through the woods in that familiar white dress covered in blood, pursuing a figure hurrying away with a crying baby. The next thing we know, Atiye is on a bus, narrating, asking if we’ve ever felt lost, ever taken a leap, ever believed in miracles, as we snippets of shenanigans from the first season. It’s a suitably ominous reintroduction to this Turkish original, which you’ll recall capped off its first season secure in the knowledge that this second outing had been greenlit. We’re seeing a new reality, and we’re adjusting to it alongside Atiye as a title card takes us back to the previous day.

In that previous day, we see Atiye hug Cansu, who says her name is Elif. This throws Atiye, whose hands could be covered in blood or paint, or perhaps both; in her confusion, she takes the opportunity to head inside when Cansu mistakes her for a job applicant. Atiye pretends to have been sent by Merve to help Cansu get her fashion collection together following her assistant quitting. Cansu/Elif has a picture of her and Erhan in the room, but can’t recall Atiye, who agrees to work basically for free and who keeps flashing back to the first season every time she interacts with Cansu. As she’s leaving, Ozan arrives; he thinks they’ve met before somewhere. If only he knew. “This is another possibility,” we hear Atiye say, as she runs her fingers along the symbol drawn on the wall outside.

Atiye is confused by this new world she’s wandering through, with all its talk of impending extinction and nobody being where they should be and perplexingly reasonable cab drivers. Her father doesn’t recognize her. Here, he never married. He’s still a policeman, though. When she leaves, he radios her name in to find out more about her. 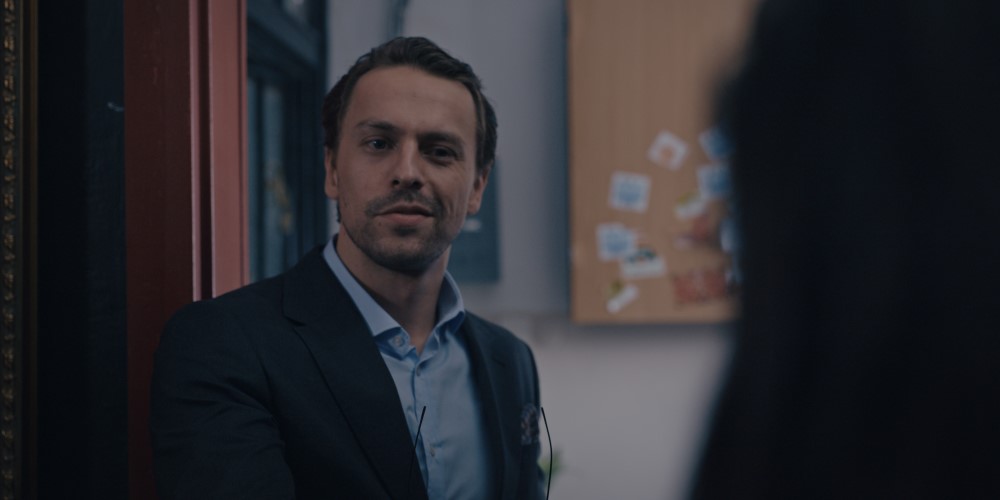 At a gorgeous waterside cafe, Atiye borrows someone’s laptop — people are pretty chilled in Turkey, I guess? — to Google herself and her mother. She doesn’t exist and her mother has made the news for erratic behavior that has left her institutionalized. Atiye visits and returns to her the necklace that the lady at the front desk was wearing, which is a bold way for a health professional to behave. Serap, luckily, recognizes Atiye, who tells her that her dad doesn’t know who he is, that Cansu is now Elif, that babies aren’t being born. Serap tells her they’re listening, they’re coming, and she has to go. She can change all this — she has to find “him”. “Finding the door is his destiny,” Serap says, “opening it is yours.” Atiye assumes she’s talking about Erhan, so she goes looking for him next.

Atiye goes to see Professor Oner, to whom she vaguely explains her predicament. He advises her not to talk about such things in public. Erhan’s father Nazim is dead, apparently, and Oner hasn’t see Erhan in years, but he points her in the right direction — to an apartment where his fiancee Hannah answers and tells Atiye that Erhan’s out of town and won’t be back for days. How convenient. Hannah makes a call to someone: “She’s here.”

Atiye’s visions of little girls on swings advise her to go back to the source, where it all began. She leaves Elif a note, which is the narration we were hearing during Atiye’s bus journey at the top of the episode. We’re to understand that Atiye has to go back to where she came from, but that’s easier said than done when certain important temples and structures are missing. Through the chainlink, Atiye spies Zühre on the plains.

Elif and Ozan have brunch with Ozan’s mother and father (his mother, earlier, was looking over the CCTV footage of Atiye visiting Serap, asking for more information about Atiye). Serdar mentions how Erhan is coming back, which Ozan seems especially dismayed about. Meanwhile, on the plains, Atiye digs up a rock boasting one of the usual symbols as representatives of Gaia Mining arrive and inform her she’s on private property. She wants to meet whoever the property belongs to… which turns out to be Erhan, now clean-shaven and scrubbed up. She explains to him how she has to get back to the cave with the purple rocks that his father found. He’s intrigued by her knowledge. This exchange caps off a highly mysterious opener to the second season.