Home » Streaming Service » Netflix » The Gift season 2, episode 2 recap – what’s mine is yours

The Gift season 2, episode 2 recap – what’s mine is yours

Atiye’s questioning draws more attention to her, and old faces continue to crop up as the search for the temple — among other things — continues.

Atiye’s questioning draws more attention to her, and old faces continue to crop up as the search for the temple — among other things — continues.


This review of The Gift Season 2, Episode 2 contains spoilers. You can check out our thoughts on the previous episode by clicking these words.

With the weird new status quo of The Gift established, the second episode rejoins Atiye and Erhan getting to know one another… again. He’s running a pretty straight-up mining operation, at least according to him, but Atiye reckons he knows more than he’s letting on about the missing temples and caves and symbols and suchlike. Erhan’s led away by an accident and some abuse from the locals, who claim the land isn’t his, but he’s steadfast in his insistence that the mining operations will continue.

Erhan’s “fiance” delivers police surveillance footage of Atiye to Serdar, as well as the news that Atiye apparently doesn’t exist — no fingerprints, nothing. She believes her job is done, but Serdar has other ideas; he threatens her to stay on-mission, watching Atiye, but not touching her until he says otherwise.

As Atiye hitches a ride in the back of a truck, the locals tell her of the star-marked woman, signs drawn on stones, and other local superstitions that Atiye, obviously, knows there is more truth to than these people necessarily realize. This is something that Serap also knows. She warns Melek to look after her family since the past and the future are about to change, which is suitably ominous. She immediately calls Ozan to check on him and tells him to come home early. He’d been at a party so he’s a bit groggy, so he goes looking for paracetamol and discovers that Elif hasn’t been taking the pill for the last two months. He reminds her that pregnant women are dying, but she thinks it might not happen to her and it’s her time to have a child. He tells her to get back on the pill or they’re over; she says fine, but in that case, they’re telling everyone everything, and there’ll be no more lies. 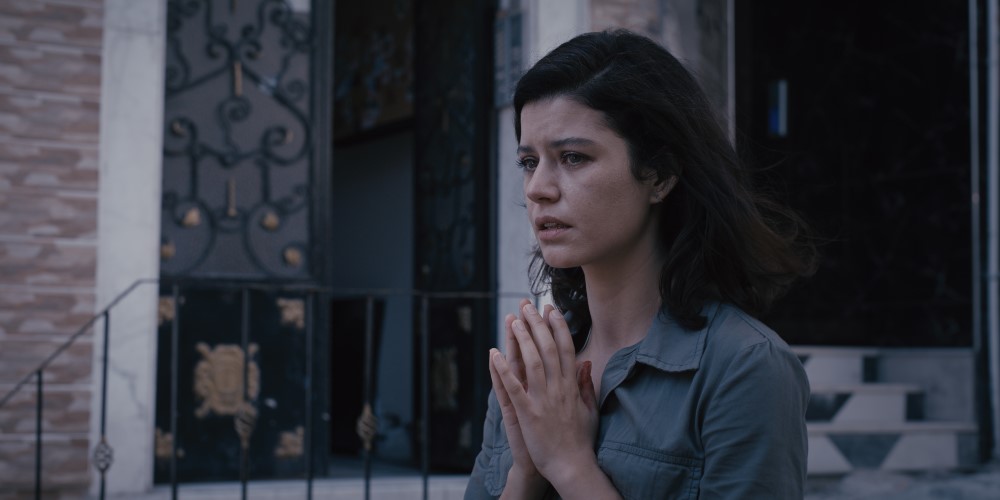 On a bus, Atiye is asked for her ID and obviously can’t provide it, so she’s taken to the police station where her dad lets her know that they haven’t been able to find any information about her, as though she never existed. She asks him to look up Erhan, who at that moment is arriving back home to Hannah. He’s preoccupied, though, and thinks back to a memory of his father telling him about the cave of purple stones. He wants some tests run on the rock sample that Atiye dug up.

As this is happening in The Gift season 2, episode 2, Atiye’s father is telling her about Erhan and Serdar’s operation; the two of them working together throws her a little. Serdar has a secret model of some ruins which he populates with little people, one of which he refers to as Atiye. He seems to be keeping this secret from Melek, who is worried about what Serap told her — he insists he isn’t hiding anything as he huffs on a tank of oxygen.

Atiye, meanwhile, spends more time with Elif, who explains how her relationship with Ozan is a big secret since they’re siblings by adoption. Ozan, having just met Atiye, is alarmed when Melek shows him the footage of her meeting with Serap. He tells Melek that she’s Elif’s new helper and asks her to send him the video. Suspicion is quickly mounting here, and Atiye is doing a terrible job of keeping herself low-key as she continues to experience flashbacks and visions while investigating Erhan’s mining activities.

She also goes back to see Serap to ask for advice on how to proceed since Erhan doesn’t remember or believe her. She thinks that a closed path is supposed to lead you to another path to take. Atiye introduces Mustafa to Serap, and he clearly recognizes her, though he convinces himself otherwise. She talks about how memories are locked rooms that lead all the way back to the beginning of everything. Atiye asks him if he can help to get Serap out of this place.

When Atiye returns to “work”, she finds Hannah trying on her wedding dress. She’s marrying Erhan in two days. Outside, Atiye spots the supposedly dead Nazim and gives chase as he scurries off. In the meantime, Erhan meets with Serdar, and we get a brief sense of their relationship as they discuss the search for the temple and how Nazim will be looking down on all he’s done. But it seems Nazim is much closer than that. Serdar and Erhan discuss Atiye as she finally catches up with Nazim (after namedropping Zühre) in a dingy apartment where he asks if she’s really “her”. He says that even though she has found him she might not be prepared for what he has to say. We’ll see!