The Gift season 2, episode 7 recap – the sins of the father

The stakes are suitably raised in the penultimate episode as the villain tips his hand and consequences are felt by everybody.

The stakes are suitably raised in the penultimate episode as the villain tips his hand and consequences are felt by everybody.


This review of The Gift Season 2, Episode 7 contains spoilers. You can check out our thoughts on the previous episode by clicking these words.

We open the penultimate episode with Atiye continuing to decipher the symbols on the plinth in the tunnel while mourners assemble for Ozan’s funeral. Melek looks deeply distraught, and Serdar distant; these two almost certainly don’t have positive things in their future, despite Atiye’s uplifting, grandiose narration about the tree joining the heaven and the earth. It does, admittedly, feel very fitting though. We’re in the endgame now.

Elif is, obviously, devastated about Ozan’s death, especially since nobody bothered to tell her the funeral was today. Serdar sends his lackey Sansar to pick her up, but Nazim’s words of warning rattle around her head. She tries to dip but she’s forced into the car just as Nazim comes running with literally the worst sprinting technique I’ve ever seen a human exhibit.

Serdar is determined to make things right, but he can’t get into his secret garden computer so flips out on it and smashes it to bits (I think we’ve all been there). Hannah, meanwhile, feigns sympathy for Erhan, but he asks her outright why Ozan died. Looks like he’s not playing games anymore. He’s taken the wedding ring off, and he tells her it’s over — it’s time for her to come clean. She admits that, as we suspected, he forced her into it. He doesn’t ask how, just what Serdar is planning. She tells him he’s been after Atiye since the beginning. He knew he’d find what he was looking for only when she showed up. Hannah starts to explain how she met Serdar, and how he gave her a job when she needed one for her sick mother. She says she loves Erhan genuinely, though, and based on what we’ve seen already, I think that’s probably true.

Nazim arrives to inform Erhan that Serdar has kidnapped Elif to use as bait for Atiye. We see him do exactly that, video-calling Atiye so she can see Elif gagged and held at gunpoint. The Gift season 2, episode 7 has upped the stakes straight away. 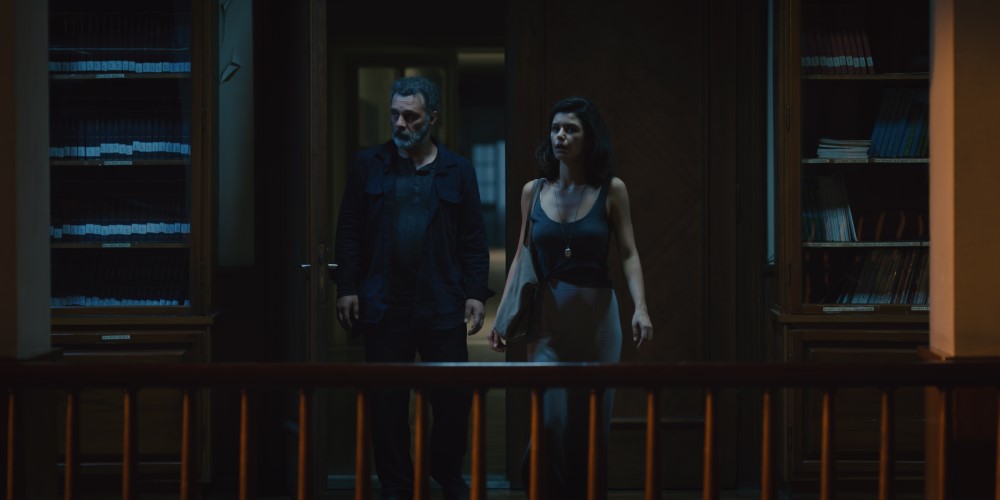 Serap arrives on Mustafa’s doorstep to let him know that Atiye is going to need their help. He says he can’t help unless Serap explains everything. She says she has little time or she risks a miscarriage. That’ll do as a ticking clock device. For once, everyone is on the same page, even if Erhan and Nazim still don’t have the best relationship. But everyone’s looking for Elif and Atiye; everyone’s converging on the same location for a showdown. If we didn’t know better, this could even pass as the finale.

Atiye gets there first. Serdar agrees to release Elif on the condition that Atiye takes him to the gate, right on time to open it. She claims not to be able to open it, but he knows it opened before. Atiye doesn’t believe he’ll get Sansar to shoot Elif, but he starts counting down from ten, which rarely bodes well. He also uses this as an opportunity to dispense his personal backstory, telling Atiye about his father shoving him in the well behind him as punishment for stealing money. That, apparently, is when he made a decision — if he got out of the well, no-one would ever humiliate him like that again. He reckons he’s destined to rule the world. There was something in the well, he says, and he’s never told anyone what it was. He gets to one, and Atiye tells him where the gate is. Right on cue, Erhan arrives.

Erhan says Elif is safe, and it turns out he’s right — Mustafa arrives and shoots the gun out of Sansar’s hand. He’s coming for Serdar next, who pulls his own gun on Erhan. Erhan doesn’t want to think he’d shoot him, but Serdar says that he only adopted him and Elif because they were useful to him. He’d kill Erhan to bring Ozan back if he could, and as if to prove it, he shoots Erhan in the chest at point-blank range. Atiye tells him they’re going to have a daughter as he imagines himself floating down into a cave. Erhan pulls her away and they’re forced to leave him; he thinks of the earthquake and his mother’s grave and sees the Jesus-looking dude that spoke with him outside the tunnel. Jesus gives him a lecture about turning his back on love, but let’s him know that he still has a chance. In the ambulance with Nazim, he goes into cardiac arrest.

Serdar takes Atiye to the gate and they discuss what they have in common. Both have used the gate to save someone they love; Serdar his wife and Atiye her sister. She reckons that Serdar has difficulty breathing because he suffocated Cansu, and as if to prove her right, he starts asphyxiating and crashes the car. We hear him gasping inside the wreckage as Atiye wriggles out. Inexplicably, she drags him from the vehicle just as it sets alight, and uses her powers to heal him.

Speaking of which, Erhan survived. We see him wake up in the hospital with a bit of stubble, looking more like his Season 1 equivalent. That’s where we leave things for the finale, with everything still to play for.