A major next step is taken in “Permanent Employment” as the publishing house begins to veer in a radical new direction.

A major next step is taken in “Permanent Employment” as the publishing house begins to veer in a radical new direction.

This recap of Love & Anarchy season 1, episode 4, “Permanent Employment”, contains spoilers. You can check out our thoughts on the previous episode by clicking these words.

Check out all our Love & Anarchy coverage.

With the news in the previous episode that Lund & Lagerstedt has been bought out by StreamUs, Ronny is fretting about how to break the news to everyone else and intimating not at all subtly that maybe Sofie should handle the announcement herself. There’s also going to be a hiring freeze from Friday onwards, which gives Sofie her next task for Max and the episode its title — he has to find permanent employment before the deadline.

Max’s appeal to Ronny only amounts to advice to prove his worth and wait for his turn.

It turns out that Denise is now in a relationship with Tove-Lee, who keeps incessantly correcting her about her use of language and reminding her of her responsibilities as a feminist, which apparently include being very open about their relationship in the office and being condescendingly referred to as “good girl”. 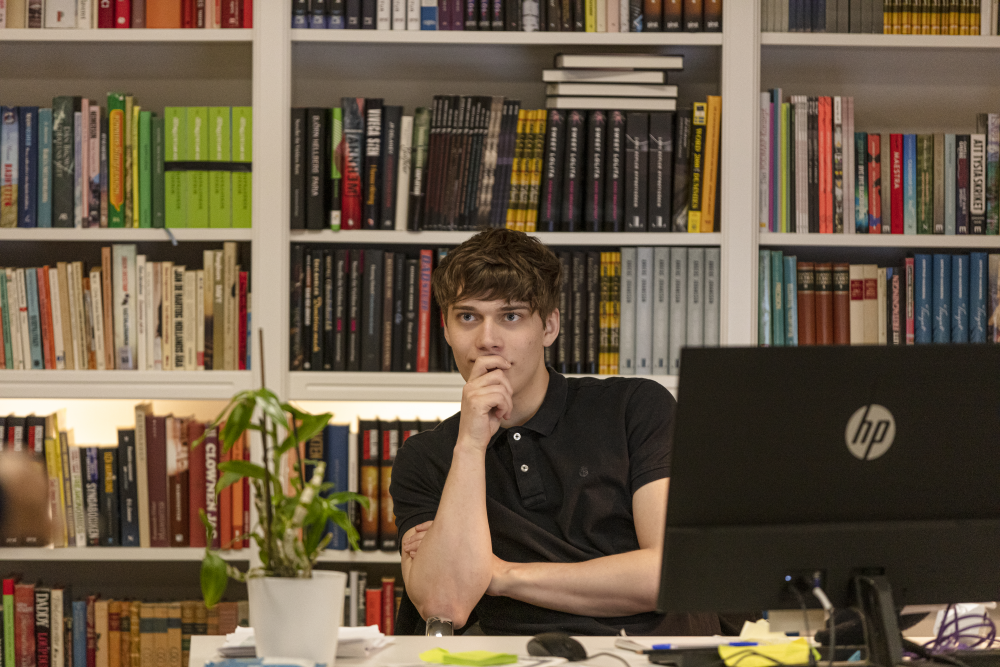 Through Max, by the way, Love & Anarchy endeavors to highlight another important social division — class. Max is distinctly lower-class in comparison to the staff and clients of Lund & Lagerstedt, and sees them all as performative self-important toffs. He’s fresh out of ideas for new ways in which to appeal to these people, but his friend has one of his own — he impersonates a junkie mugger and assaults Ronny, spinning a tale about how his decline began when he was dismissed from his temp job. Ronny sees right through this but gives Max permanent employment anyway, which he celebrates by going outside and snogging Sofie, who kisses him back and then quickly scurries away in horror.

Immediately after this Sofie has a meeting with Isabell’s school about how she’s doing, which is, academically speaking, very well. But she’s also a loner, and a bookworm, which Sofie is asked to “work on” with her, as though being interested in books over TikTok and twerking is somehow a social failing. Isabell seems smart to me.

Anyway, when Sofie returns to work, Max has a new, slapsticky challenge for her — she has to walk backwards the whole day. This is particularly juvenile since she also has to conduct the meeting and announce some major developments like the hiring freeze and the fact that Lund & Lagerstedt has been sold. Nobody besides Ronny seems all that thrilled to hear this or to see the new logo, and Friedrich especially is horrified to learn that the parent company is StreamUs.

The degradation of literature only continues in Friedrich’s eyes — and even Denise’s when it comes to this matter — when Sofie suggests a Book Fair. Through all this, Sofie is still walking backwards, even at home, which makes no sense since Max can’t see her and massively antagonizes Johan, who is worried about the dinner party that they’re hosting. Once he starts making patronizing remarks about Lars, she resumes walking backwards solely to antagonize him, and I can’t say I blame her.

Thanks for reading our recap of Love & Anarchy season 1, episode 4, “Permanent Employment”. For more recaps, reviews, and original features covering the world of entertainment, why not follow us on Twitter and like our Facebook page?