Hillbilly Elegy is an uneven tale with standout performances from Glenn Close and Amy Adams.

Hillbilly Elegy is an uneven tale with standout performances from Glenn Close and Amy Adams.

There is nothing wrong with growing up in the rural heartland. I’ll take a little bit of Brooks and Dunn over Catullus and Propertius any day. That being said I’m almost certain critics will use this week of political viewpoints to criticize Hillbilly Elegy’s tale of social problems of the poorer side of middle America. The issue with Ron Howard’s latest tailspin into mediocrity isn’t anything political. It’s the fact the film is uneven, spending too much time on the later years and glossing over sociological issues without a deeper look. An opportunity of telling a story about the region’s raging problem with drug abuse and mental health issues was missed. Instead, it has been replaced with a melodramatic actor’s showcase.

Hillbilly Elegy is based on J.D. Vance’s bestseller Hillbilly Elegy: A Memoir of a Family and Culture in Crisis. It chronicles his life as a young man attending Yale Law school after a stint serving his country in the Marines. J.D. (Gabriel Basso) finds a lack of cultural sensitivity in New Haven. He served his country, but potential law firms still refer to him and his family as hillbillies. Despite other’s perceptions, he continues to attempt to find an internship. He then lands an interview with a D.C. firm, but is called back home by his sister, Lindsay (Swallow’s Haley Bennett). Their mother, Bev (Amy Adams) is in the hospital after overdosing on heroin.

Hillbilly Elegy’s script was adapted by Oscar-nominated writer Vanessa Taylor (The Shape of Water). She makes the same mistake that most adapted memoirs do, spending too much time on a character that is not as interesting as the supporting players. Memoirs tend to show an unfiltered view of others. The author, in turn, will show an filtered view of themselves. Furthermore, with the addition of Amy Adams and Glenn Close, the script becomes bloated, uneven, and not as interesting as the present-day timeline Hillbilly Elegy structures itself with. 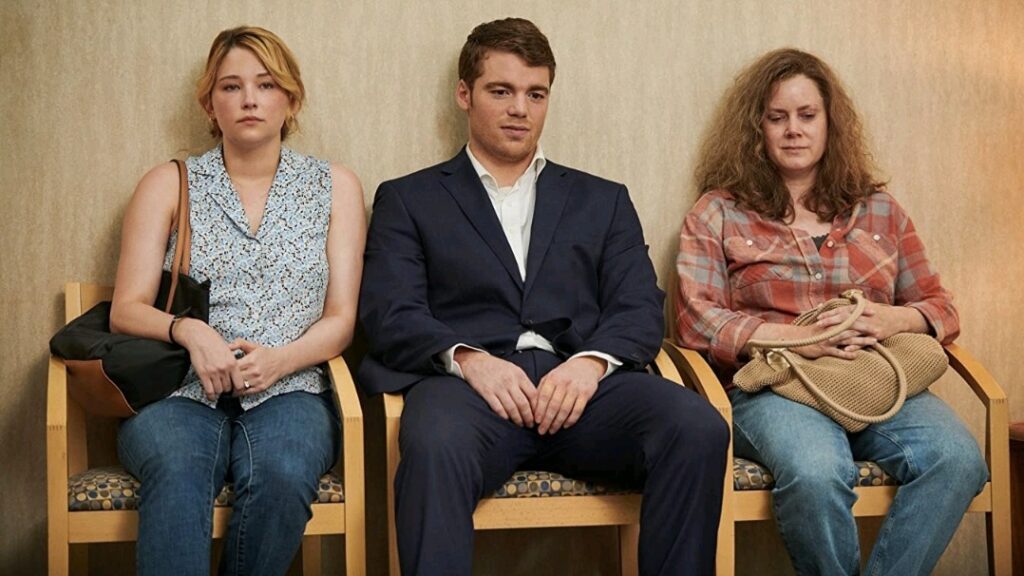 This is a film that becomes more concerned with beefing up smaller parts for its stars. To an extent, it works but takes away from the overall film as a whole. Amy Adams is very good here. She plays a mother whose life has been derailed by substance abuse that has gotten worse with every passing year. Glenn Close, I’m certain, will receive an Oscar nomination for Best Supporting Actress. She plays the tough as nails Mamaw who risks her health and home to raise her grandson when her daughter can’t (it’s the type of role that the Academy responds to because they love a Hollywood actress in a big wig and funny glasses).

Hillbilly Elegy is almost culturally competent when it comes to this region’s raging problem of poverty, drugs, and mental health issues. Gabriel Basso’s spin on J.D. is very grounded. The relationship with his girlfriend Usha (Frieda Pinto) is very honest when it comes to the worries of introducing his non-white girlfriend to his family. Not of his family’s acceptance mind you, but of how their reaction may hurt her, and exposing her to his family’s embarrassing issues.

There are a lot of positives in Howard’s adaptation. The performances are notable, Close in particular. The film though should have had a singular focus on J.D.’s advancement through adolescence and being able to get out of Middleton. Yes, thank you for pointing out that I am making a newer version of This Boy’s Life. That doesn’t mean it would not have made for a stronger film.