The Outpost season 3, episode 7 recap – “Go Ahead and Run”

“Go Ahead and Run” gives Janzo more responsibility than seems wise, while Talon, Garret, and Zed head out into the realm on Yavalla’s trail.

“Go Ahead and Run” gives Janzo more responsibility than seems wise, while Talon, Garret, and Zed head out into the realm on Yavalla’s trail.


This recap of The Outpost season 3, episode 7, “Go Ahead and Run”, contains spoilers. You can check out our thoughts on the previous episode by clicking these words.

I’m sure the third season of The Outpost was written and filmed before the Covid-19 pandemic really took hold, but it works as a fitting metaphor for our current predicament nonetheless. The ability for an indiscriminate virus to move sneakily among a populace is pretty integral to Yavalla’s plan to round the realm up into her so-called “United”, and in the meanwhile, the chaos that erupts from enforcing quarantines and draconian border policies is causing havoc back at the Outpost. Fantasy, like science-fiction, has always been a reflection of contemporary culture, intentionally or otherwise, and the convenient topicality has helped to give the third season of this reliably improving show a jolt of additional impact.

“Go Ahead and Run” opens with the Capital being infiltrated without much fuss, really, and it’s telling that a pretty momentous development like that is confined to the cold open and not a climax. Yavalla’s kinj works sneakily, but quickly and completely. It’s devastating because it strips away individuality and mandates subservience. There is no fight for the Capital but there is no will to fight, only to serve. 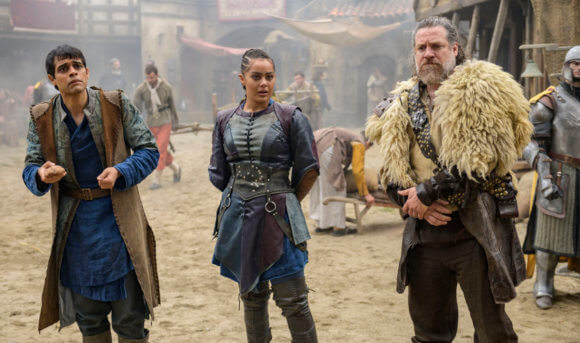 That will to fight is something that the heroes still retain, at least – the issue is their will is still largely to fight each other. Garret and Zed aren’t exactly best chums, and Janzo and Wren, lovey-dovey though they might be, have something of a wedge driven between them when it becomes increasingly obvious that sawing Yavalla’s head off and keeping it separate from her body might be the only viable course of action. Garret, Talon, and Zed go off to do that, leaving Janzo and Wren in charge of the Outpost.

I’ve said in the past during these recaps that I wouldn’t trust Janzo to open a tin of beans, much less look after an entire community in crisis, and while Wren is intelligent, she isn’t exactly leadership material. They do, however, make a good team, which is just as well since Prime Order soldiers, supposedly without loyalty to the Three after the battle with the United, barge their way inside for shelter. Naturally, they’re not to be trusted, giving Janzo an excuse to stand up for his people and prove himself a leader after all.

Nevertheless, “Go Ahead and Run” does have the distinct whiff of a time-killing episode designed to shuffle things into place for the back half of the season. There’s some CGI-heavy stuff involving the Lu-Qiri and the Prime Order soldier’s pilfered kinj, but that kind of action has never been where the show excels. Better is the scrap Talon, Garret, and Zed get into, but it’s a relatively light outing, all things considered. Still, there’s plenty of juicy setup that should pay off later, and I’m still invested in the overarching goings-on.

Thanks for reading our recap of The Outpost season 3, episode 7, “Go Ahead and Run”. For more recaps, reviews, and original features covering the world of entertainment, why not follow us on Twitter and like our Facebook page?