“Dying is Painful” ties up a few loose ends and suggests a complicated love triangle is going to occupy focus for a little while at least.

“Dying is Painful” ties up a few loose ends and suggests a complicated love triangle is going to occupy focus for a little while at least.


This recap of The Outpost season 3, episode 8, “Dying is Painful”, contains spoilers. You can check out our thoughts on the previous episode by clicking these words.

A fair amount happened in “Dying Is Painful”. It had all the usual fantasy action that The Outpost has become pretty good at, it snipped off a few current plot threads and introduced a couple more, and it’s not entirely clear where the rest of this season’s back half is going to go – which isn’t necessarily a bad thing, even if it opens up some possibilities for tedious time-killing love triangles in lieu of actual development. But this show is also very good at burning through plot really quickly, so there’s no cause for concern just yet, and we leave things with plenty of potential for the last few episodes leading into the finale.

The battle between the Outpost’s heroes and Yavalla is obviously still the overarching season-long conflict, but by increasing the distance between Yavalla and everyone else and freeing two of her most influential puppets from her thrall, “Dying Is Painful” seems to be putting it in on the backburner, for now, to focus on more pressing matters. A good chunk of this episode saw Talon, Garret, and Zed freeing both Gwynn and Tobin from the United with the help of one of the Three’s green kinj and… murder, as it happens. This, it turns out, is a good way to save those infected from the long, soul-sapping fate caused by constant infection, but it’s hardly a wide-scale solution. 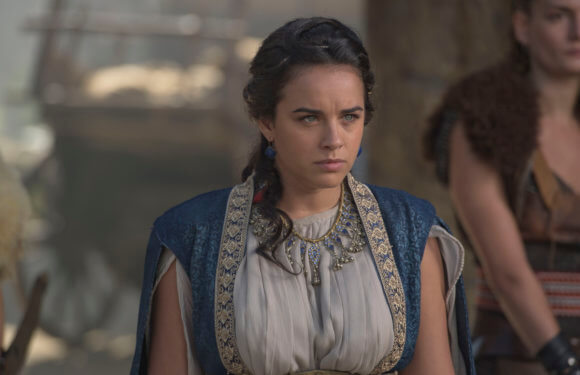 We also saw the conclusion to the plotline back at the Outpost, which saw former Prime Order solder Jarris take over the place with help from the red kinj, even though he didn’t even know what it was called, and we found him here basically lording over the citizens and forcing Blackbloods to fight to the death while he hurled xenophobic insults at them. While Wren and Janzo were obviously front-and-center in this, the arrival of Falista threatened to complicate the matter too, but it turned out to be a returning Talon who saved the day by beating up and then killing Jarris, thus purging his kinj and returning the Outpost to good-guy control. Catharsis!

The problem with this is that Jarris’s newly-freed red kinj jumps right into Falista, and given what we already know about her and her fondness for Tobin, that very much suggests to me that the love triangle between those two and Gwynn – who still, hilariously, doesn’t know that Tobin is married – is going to become rather important for the next few episodes at least.

We’ll have to see how that goes. Worse things have happened, obviously, and there’s no reason to suspect just yet that The Outpost is going off the rails. But I hope we don’t linger on this too long all the same.

Thanks for reading our recap of The Outpost season 3, episode 8, “Dying is Painful”. For more recaps, reviews, and original features covering the world of entertainment, why not follow us on Twitter and like our Facebook page?