“She Is Not A God” puts a lot of focus on Gwynn as she finds herself in several difficult positions, but the Imogen Waterhouse-directed episode also spares time for the on-going search for Yavalla.

“She Is Not A God” puts a lot of focus on Gwynn as she finds herself in several difficult positions, but the Imogen Waterhouse-directed episode also spares time for the on-going search for Yavalla.


This recap of The Outpost season 3, episode 9, “She Is Not A God”, contains spoilers. You can check out our thoughts on the previous episode by clicking these words.

“She Is Not A God” was directed by Imogen Waterhouse, and focuses mainly on her character, Gwynn – it seems as good a time as any for that since Gwynn has only recently been freed from the control of Yavalla’s kinj and burdened with the news that her fancy-man, Tobin, is actually married to a gobby hottie named Falista who has inherited the freed red kinj, though what she’s going to do with it remains to be seen. With all this going on, it’s wise to hone in on Gwynn’s headspace, especially since the pressing matter of what to do with the captured Red Guards is of very immediate concern.

Naturally, Gwynn’s compassion gets her into trouble in this regard. Only moments after pledging fealty to Gwynn and the Outpost, the Red Guards spring the deeply unpleasant Two from captivity. It was obviously a ruse all along, but surprisingly I wasn’t screaming at the television that Gwynn was an idiot. She made an empathetic, understandable decision based on her own experiences, much the same way Talon has been doing all this time, which Two attempts to make her feel guilty about earlier in the episode. I’ll never suggest that this show is without its faults, but the more I think about it, the more I respect the writing and character development. It’s rare that anyone makes a decision in this show without a decent reason for doing so. 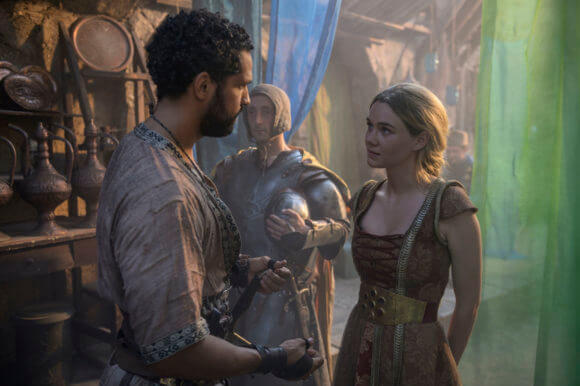 Aside from Gwynn’s dynastic worries, “She Is Not A God” also spares some time for the on-going search for Yavalla and the on-going predicament of what to do with her once she’s found. It’s an interesting dilemma since the easiest way of dealing with her is probably killing her, but the person most likely to be able to find her is also most determined to find a compassionate solution that’ll “save” her too. Wren is adamant that Yavalla has been as corrupted by the kinj as anyone, which doesn’t ring entirely true to me, but only because she seemed pretty nakedly sinister from the start. More backstory on Yavalla would probably be appreciated to make this idea stick.

Nevertheless, Janzo’s immediate loyalties are to his new missus, which is why the two of them – along with Munt – head out with what they believe is the cure, even at great personal risk. The likelihood of this going as planned is pretty slim, but it’s an interesting spot to leave the episode with everything still to play for in the final few episodes of the season.

Thanks for reading our recap of The Outpost season 3, episode 9, “She Is Not A God”. For more recaps, reviews, and original features covering the world of entertainment, why not follow us on Twitter and like our Facebook page?