The Outpost season 3, episode 10 recap – “From Paradise to Hell and Back”

“From Paradise to Hell and Back” cements Yavalla as a minor nutcase God, as politics back at the Outpost get more complicated than ever.

“From Paradise to Hell and Back” cements Yavalla as a minor nutcase God, as politics back at the Outpost get more complicated than ever.


This recap of The Outpost season 3, episode 10, “From Paradise to Hell and Back”, contains spoilers. You can check out our thoughts on the previous episode by clicking these words.

Picking up where the previous episode left off, “From Paradise to Hell and Back” finds Wren, Janzo, and Munt arriving at the Capital to see Yavalla in her rather anticlimactically drab throne room, which is basically just a pile of rocks. Wren has to go in alone and they have a very pointed conversation about the nature of peace versus free will until it inevitably all goes wrong. Having declared herself a god — a sentiment she expresses multiple times throughout the episode — Yavalla rejects Wren’s attempts to “cure” her with the serum. During the ensuing kerfuffle, Wren and Munt are both infected, while Janzo is able to escape with a little help from Talon, Zed, and the incendiary device Zed had intended to cook Yavalla with.

This forms the A-plot of The Outpost season 3, episode 10, more or less, and the other half is devoted to on-going tensions back at the Outpost, primarily presented in terms of Gwynn’s decision-making. Left alone with Garret, those two continue to bond over their shared experiences of being a thrall to someone else, but their relationship remains platonic — for now, anyway. Tobin and Falista, meanwhile, return to the Outpost with food raided from Aegisford after spending most of their journey discussing Gwynn, since, as Falista puts it, if they didn’t talk about her they’d talk about nothing at all. What Tobin liked most about her, we learn, is that she made him feel useful, giving Falista a bright idea. 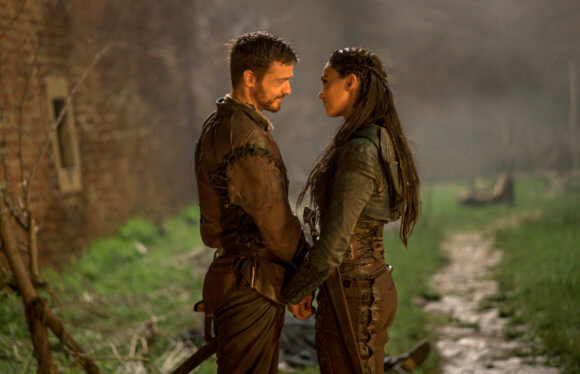 In an incredibly bitchy conversation, Falista petitions Gwynn to appoint Tobin as her chief advisor. We see Falista flex her kinj here, which gives Gwynn a bad headache, but it’s not entirely clear whether Falista even knows what it is or has any real plans for what to do with it. It seems in this instance it was triggered inadvertently by emotion. It’s difficult to say, though.

Speaking of kinjes, Yavalla, through Wren, learns of Gwynn’s revival and sends one of the United to infect her again, though Garret is able to save her. This is perhaps why, later, she installs him as her chief advisor rather than Tobin, thus depriving him of the sense of usefulness he so clearly covets. It’s difficult to know how this will affect him going forward, but I’m glad it hasn’t made him irrational towards Garret, or even Falista, who he apologizes to for shouting after explaining to her that he can’t make his own way in the world if she keeps trying to interfere. The relationship between these two continues to be a bit weird, since I’ve always felt like Falista’s feelings for him are pretty genuine. I guess the question is just how far she’s willing to go for “him”, and thus herself.

Anyway, Janzo, using his plot-convenient genius, is able to build another incendiary device which he, Talon, and Zed confront Yavalla with. They set her alight and Talon lops off her head, which you’d think would do the job. But no such luck. While she’s distracted Janzo is able to cure Wren, though not Munt, and Yavalla sics the giant simpleton on our heroes. Luckily, though, Janzo is able to get through to him long enough that everyone can escape, which I’m pretty sure isn’t how these kinjes have actually worked until this point, but let’s not quibble over the details. “From Paradise to Hell and Back” ends with Yavalla assuming her God-like status thanks to her resurrection and standing before the baying crowd of the capital, presumably ready to start some more trouble.

Thanks for reading our recap of The Outpost season 3, episode 10, “From Paradise to Hell and Back”. For more recaps, reviews, and original features covering the world of entertainment, why not follow us on Twitter and like our Facebook page?