“Kill the Rat, Kill the Kinj” bides time with a murder mystery as Janzo and Wren attempt to figure out how Yavalla’s kinj works, and Talon befriends her very own Lu-Qiri.

“Kill the Rat, Kill the Kinj” bides time with a murder mystery as Janzo and Wren attempt to figure out how Yavalla’s kinj works, and Talon befriends her very own Lu-Qiri.


This recap of The Outpost season 3, episode 6, “Kill the Rat, Kill the Kinj”, contains spoilers. You can check out our thoughts on the previous episode by clicking these words.

Following Yavalla and Gwynn’s path through the realm, Garrett, Talon, and Zed arrive at the small village that was infected at the end of last week’s episode. They’ve all been warned of the traitors from the Outpost, but spreading the infection can’t just be a case of butchering everyone — they’re innocent people, at the end of the day. Yavalla speaks to Talon through one of the townsfolk, asking her to pass on a message to Janzo that she approves of his choice of mate — she has been watching him and Wren through the rat in the brewery — and expects both of them to join her soon.

Back at the Outpost, Talon sends messages out to Aegisford and elsewhere warning them of a new plague and advising a complete lockdown — timely! She also advocates telling people who can’t lockdown to take shelter at the Outpost, which Janzo isn’t thrilled about, taking something of a right-wing stance in this instance. He’s aware of the surveillance rats, at least, which he and Wren are studying to better understand the behavior of the kinj and its reproductive process. Janzo sends Munt and his new friend Warlita out to catch more rats.

With people piling up at the gates of the Outpost, tensions are beginning to rise, and there’s a rift emerging between Talon and Zed about how best to proceed, especially regarding the infected. Meanwhile, Munt and Warlita discover a severed hand outside the walls with a good helping of blood and a symbol drawn on the wall — a symbol Talon recognizes from her village, which can’t bode well for anyone. Since Garrett seems to have inherited some of his father’s investigative abilities, Talon tasks him with figuring out what happened.

Munt takes the hand to Janzo; he’s going to work on that while Wren investigates the kinj more, which has become especially pressing since they’ve determined a rough rate of infection that will overwhelm the entire population in record time. Wren hits on the smart idea of using a rat in a cage as a kind of detection device for the newcomers flooding into the Outpost since it’s so desperate to pass on the kinj it’ll reveal who’s infected and who isn’t by its eagerness. 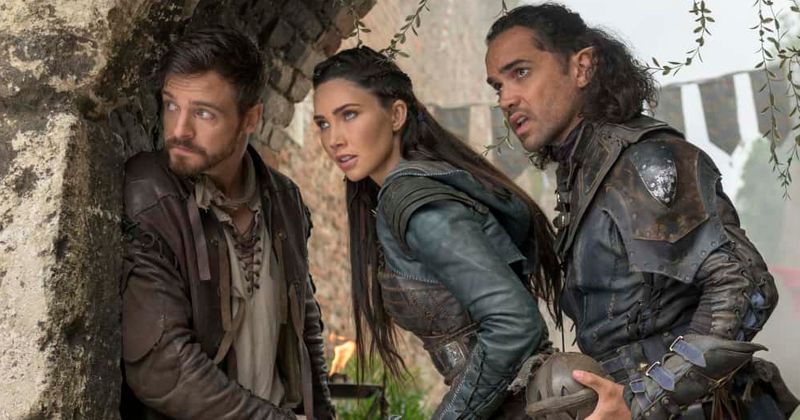 With that preventative measure in place, the Outpost nonetheless starts filling up with people who have nowhere else to go, which it seems Garrett isn’t fond of either. Nevertheless, with Janzo having tipped him off about some blue dye on the wrist of the hand he found, it gives him plenty of people to examine. That night, Warlita is accosted by several masked men in the streets and carried away, dropping her brooch in the process.

Wren and Janzo, in the meantime, have determined that there’s no way to safely remove a kinj from a living host — kill the rat, kill the kinj, and the same applies to humans, which isn’t an acceptable solution for Talon, obviously. Their next objective, then, is to figure out a way of killing the kinj without killing the host. Speaking of killing, there’s another murder outside — another young woman with the same symbol daubed across her chest in blood, and the same cracked-heel footprint is left behind. Talon also detects Lu-Qiri tracks among them. The women are being fed to Lu-Qiri; there must be a masterless one on the loose since those under Blackblood control won’t eat humans or Blackbloods.

Zed quickly determines that the ronin Lu-Quri is Xaba, formerly Yobahn’s demon, and trained to be savage — there are no bad dogs, only bad owners, and all that. It can be summoned with a whistle but she elects to track it along with Zed, which is perhaps just as well since the masked cultists are readying Warlita to be sacrificed. Xaba is roaming the woods and gives Talon and Zed both the pimp hand, but a stern telling off lets her know what time it is. Talon suggests next time she’ll try something Yobahn never gave her — kindness. “Good luck with that,” Zed snorts.

Nevertheless, when she encounters Xaba again, she tries it — and it seems to work. The thing’s quite reasonable for a hulking interdimensional monster. Meanwhile, Warlita is strung up by the cultists and prepared as Xaba’s entree, but this time when the Lu-Qiri arrives, it frees Warlita and attacks the cultists, though in a controlled way. She’s bonded to Talon now, apparently, and in full control of her instincts. That gives Talon a valuable ally in the upcoming battle, and she’s going to need it. Janzo and Wren summon her and Janzo to the brewery, where they reveal that the kinj’s reproduction causes the hosts to rapidly age and die. Since Gwynn was infected first, she doesn’t have long left as a spritely young woman. Talon gives him three days, and then she’s going after the queen regardless.

Thanks for reading our recap of The Outpost season 3, episode 6, “Kill the Rat, Kill the Kinj”. For more recaps, reviews, and original features covering the world of entertainment, why not follow us on Twitter and like our Facebook page?