“Under Yavalla’s Control” sees the advantage swing this way and that as the battle for control begins to spread far and wide.

“Under Yavalla’s Control” sees the advantage swing this way and that as the battle for control begins to spread far and wide.


This recap of The Outpost season 3, episode 5, “Under Yavalla’s Control”, contains spoilers. You can check out our thoughts on the previous episode by clicking these words.

With the latest developments, things aren’t looking too good for Talon, Garret, and Zed, who you’ll recall are now well aware of Yavalla’s plot but currently able to do very little about it. Luckily Zed’s Lu-Qiri seems to be back in play, but the more pressing matter is determining whether or not Tobin has already been infected with Yavalla’s infectious kinj, courtesy of Gwynn, so Talon and Garret kidnap him and take him to Janzo, who isn’t exactly in favor of the plan.

I’m glad this show found a proper sense of humor. Garret putting on a voice to try and clandestinely interrogate Tobin was genuinely funny to me, as was Tobin immediately figuring out who was present despite all their efforts. Tobin thinks they’re interested in his marriage to Falista, but no such luck. Zed determines that he doesn’t have a kinj, which means he’s going to have to be brought into the scheme.

Yavalla is understandably concerned about why Gwynn didn’t immediately pass the kinj onto Tobin. But she has a more pressing concern — Talon can’t be infected, which means she might have to be killed. Gwynn isn’t thrilled to hear this, despite being under Yavalla’s thrall. If push comes to shove, though, well… perhaps it’s better not to find out. Yavalla also mentions getting rid of Zed for the same reason, but Gwynn doesn’t seem concerned about him.

There’s beef in the hero camp, too, since Garret has it out for Zed, and Talon is annoyed that Tobin betrayed her friend by marrying another woman. They’re all on the same side, as they have to keep reminding each other, but it certainly doesn’t seem that way at the moment. Still, there’s a bit more synergy when the trap is sprung. Tobin turns up at the throne room trying to talk Gwynn into leaving with him, warning her of Yavalla’s control, until Yavalla herself, along with Sammy and some guards, turn up to apprehend them. Talon and Zed are on-deck for an ambush, and it all kicks off, which sadly results in Talon having to kill Sammy, which only pushes Gwynn more to Yavalla’s cause. Yavalla is ultimately apprehended, though, and both Yavalla and Gwynn are imprisoned, guarded by some of Tobin’s men who were stationed outside the gates and thus weren’t exposed to the kinj.

We also get something of a revelation during the fight — Zed’s kinj can control even those who’re infected. Since Gwynn was unable to transfer her kinj to Tobin during their first encounter, that also leads Janzo to deduce that there’s a gestation period, meaning it’s unlikely that the infection has spread beyond those in the room.

Zed fills Wren in on what happened, and she’s a bit offended that they didn’t loop her in, to begin with. Naturally, both of them feel betrayed, and both need to be able to trust each other — Wren claims she’ll do whatever’s necessary, but do we believe her? We’ll have to wait and see.

Nevertheless, Wren works with Janzo to flesh out his hive-mind theory, and the conclusion he arrives at is taking out the “queen”, which Wren obviously isn’t too keen on as an idea. They clash a bit over it, and Talon rightly points out that this is very likely to push her into “untrustworthy” territory. Janzo assumes she’s jealous, which is a bit ambitious. 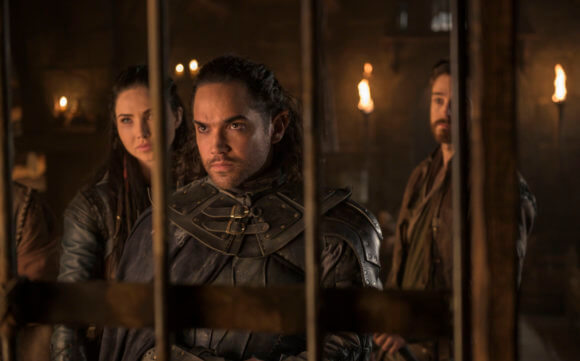 In the cells in The Outpost season 3, episode 5, Gwynn is in agony. She has held onto her kinj too long and it has divided — eventually, it will kill her unless she unites with someone. Yavalla catches a rat and hands it over, and Gwynn shares her kinj with it, which seems to perk her up a bit. The rodent flees when Garret opens the dungeon doors. He tries to get Gwynn onside, but when she tries to manipulate him into letting her out, Yavalla grabs him from behind and Garret is forced to stab her in self-defense. With her dead, Garret asks if Gwynn is free of her now, but Yavalla smugly resurrects, and she and Gwynn hold hands through the bars in triumph. That… complicates matters a little.

Meanwhile, Yavalla is piloting the possessed rat around the Outpost and steers it directly into Tobin. It passes the kinj to him through a bite, and suddenly things are unraveling rather quickly. We also get an important bit of information here: Yavalla can only see through an infected’s eyes if she makes a purposeful connection, and her mind couldn’t support seeing through everyone’s eyes at once — not yet, anyway.

Garret reports to Janzo what happened with Yavalla, and even though he seems more concerned about upsetting Wren than the information being delivered, he eventually cottons on to the point — Yavalla can’t die. While this is happening, Tobin goes to the dungeons and has everyone released, and the infected immediately begin spreading their “gift” among his men.

The funniest scene of “Under Yavalla’s Control” comes when Wren confides in Munt, of all people, about what he’d do if someone suggested killing his mother. It’s hilarious on its own terms, but it also leads Yavalla to a revelation, which she takes to Janzo. She has determined that she feels the way she does because she’s in love. At least things are looking good for someone! They smooch a bit, and Janzo tells her about Yavalla’s immortality. Wren wants to see her, and is confident that she can’t possibly infect her from her jail cell, which would possibly be true if she was still in one, which as we know she isn’t. The gang gets back together and interrogates the gate guard, learning that Tobin is infected and that he, his army, Yavalla, and Gwynn are all long gone.

Janzo is worried about Tobin’s army infecting the entire realm, and also that whoever was infected and got to Tobin might still be around. But there are more pressing matters since with Yavalla and the Outpost’s queen having left together, there’s plenty of beef within the Outpost itself. Garret is forced to reveal himself as alive, and Zed is forced to explain to both sides Yavalla’s current plot, with Wren verifying the information for the skeptical. Luckily, Talon is on-hand to deliver a rousing, unifying speech to unite the disparate forces, who’re convinced to work together under her leadership. Garret will command the humans, Zed will command the Blackbloods, including the Blackfist. Everyone chants Talon’s name in support, even if she doesn’t seem too keen on the idea of leadership.

Later, while Janzo and Wren are in bed together, Janzo spots and captures a rat that was heading right for Yavalla’s face. A quick examination reveals its possession of a kinj, and Janzo puts two and two together. He also realizes that the rat is staring at them, and Wren confirms she feels her mother is looking right at her. They figure out she’s watching, and Talon covers the rat up with a rag. Surely just kill it? Perhaps that isn’t suited to the CW.

As Talon and Garret prepare to set out on Yavalla’s trail, we see Yavalla, Gwynn, Tobin and the army pull up at a nearby settlement, where Gwynn begins the infection process. Yavalla, her plan coming to fruition, smiles.

Thanks for reading our recap of The Outpost season 3, episode 5, “Under Yavalla’s Control”. For more recaps, reviews, and original features covering the world of entertainment, why not follow us on Twitter and like our Facebook page?