“All Enemies, Foreign and Domestic” is light on action, but it moves the pieces into position for the endgame as last week’s major death has repercussions for everyone.

“All Enemies, Foreign and Domestic” is light on action, but it moves the pieces into position for the endgame as last week’s major death has repercussions for everyone.


This recap of Warrior season 2, episode 8, “All Enemies, Foreign and Domestic”, contains spoilers. You can check out our thoughts on the previous episode by clicking these words.

The cold open of “All Enemies, Foreign and Domestic” finds Ah Sahm, Young Jun, and Hong having an interesting conversation about Hong’s whip chain over what we eventually learn is a pile of dead Fung Hai henchman. Don’t get used to seeing these three together, though, despite how fun their dynamic is, since we scarcely see them for the rest of the episode and the implication of a prior fight here is the closest any of the three come to a scrap. Maybe next week.

This might ordinarily be a problem, but we find the show at a pretty integral narrative juncture now, so it’s important to get the admin filed away before we rush to the finale. You’ll recall that last week, Jacob killed Mayor Blake to protect Penny and Sophie, and we pick up in the aftermath of that, with Buckley – a brief nightmare reveals he had his lower leg amputated in the Civil War – being summoned to the Mayor’s home. He and Flanagan question Penny, who’s remaining tight-lipped, but Sophie gives away Jacob’s involvement as we’re tellingly reminded that Buckley is now acting mayor.

The underlying sense elsewhere is of rapidly escalating violence and a brewing war, especially between the tongs, now that the Hop Wei is under Young Jun’s impulsive leadership. Mei Ling recognizes the need to keep up appearances to some degree, and so too, it seems, does Father Jun. The problem is that the latter is still incarcerated, and can’t do anything to influence the tong’s decision making anymore. All these provocations are going to add up sooner rather than later, and the cost will be in blood.

Things at the SFPD aren’t going swimmingly either. Lee and O’Hara are still at each other’s throats, even going so far as to get into a scrap in the station, and anti-Chinese sentiment is at an all-time high after the death of the mayor. That demise also has a knock-on effect for Leary, who has lost a valuable ally in his mission to provide jobs for his countrymen, which the Irish union is already at his throat about. As Buckley is sworn in as acting mayor, the police begin to ransack Chinatown. The fuse has very much been lit. 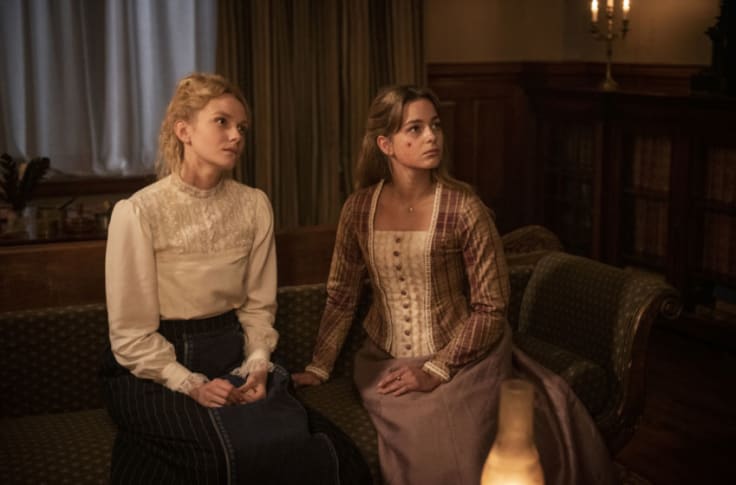 Buckley’s new power position goes to his head. He’s still pushing the Chinese Exclusion Act, so needs Jacob to be caught ASAP, and recruits Mei Ling to that cause by threatening the Long Zii’s opium trade. He rejects Leary’s request to deputize his men completely. San Francisco’s institutions are openly at war with the Chinese while the Chinese gangs are still reticent to go to war with each other – the question of who the real thugs are here remains open to some debate. Of everyone, it’s O’Hara who seems the most reasonable, warning Ah Sahm to stay off the streets while the police search for Jacob, and later sticking up for Chao.

There’s only one fight in “Enemies, Foreign and Domestic”, and it occurs in Ah Toy’s bordello between her and Nellie and Cleaver and Hammer, the unimaginatively-named hitmen hired by Patterson. All respect to Nellie for intervening here, but she’s not much use in a fight, and Ah Toy is left to deal with both of them on her own, which she manages but not without some physical cost.

I get what Warrior was going for with this fight scene – a much more skilled but physically outmatched combatant being overwhelmed by two brutes. But there’s a part of me that thinks it undersold Ah Toy to create that impression. The choreography could have been a bit more evenly matched rather than delight in Ah Toy getting battered to the extent it did. It was still a solid sequence, and since it was the only one in the episode we mustn’t look a gift horse in the mouth, but if I didn’t have nit-picks I’d be out of work.

Nevertheless, in the aftermath, Ah Toy dismisses Nellie, telling her this is no place for a white woman – she’s probably right, but it’s a shame to see her go, all things considered. Either way, it clears the slate for Ah Toy to get a bit more hands-on, taking Cleaver and Hammer’s severed heads to dump on Patterson’s dinner table in front of his family. Needless to say, he signs off on her property and agrees to disappear.

Speaking of which, when Chao returns home he finds Jacob in hiding there, getting him much more directly involved with current events than he’d probably like. It’ll be interesting to see where this goes.

Thanks for reading our recap of Warrior season 2, episode 8, “All Enemies, Foreign and Domestic”. For more recaps, reviews, and original features covering the world of entertainment, why not follow us on Twitter and like our Facebook page?