Warrior season 2, episode 7 recap – “If You Wait by the River Long Enough…”

“If You Wait by the River Long Enough…” is more plot-heavy than usual, with fewer scraps, but it does result in a pretty major character death.

“If You Wait by the River Long Enough…” is more plot-heavy than usual, with fewer scraps, but it does result in a pretty major character death.


This recap of Warrior season 2, episode 7, “If You Wait by the River Long Enough…”, contains spoilers. You can check out our thoughts on the previous episode by clicking these words.

“If You Wait by the River Long Enough…” could almost be mistaken for an episode of an entirely different show, one with much less action and overt Bruce Lee homage and much more plot development. For once, this is welcome, since it occurs after a couple of back-to-back bangers and finds the gangland status quo rather significantly changed. It might not be exciting, but it amounts to some vital turns and a major character death, so it’s an important late-season instalment.

And it begins right where we left off, with Ah Sahm, Hong and Young Jun being held to account for their secret mission. Father Jun is fuming, especially with his son, and wants to burn him out of the Hop Wei Tong – literally, by pressing a red-hot sword tip across the brand he already has. Does Father Jun just keep a sword in the fire at all times explicitly for this purpose? No matter. Either way, Young Jun isn’t particularly phased, which only incenses Father Jun further. He orders the men to kill them, but Ah Sahm is able to talk everyone around. Father Jun is usurped as head of the Tong, and Young Jun takes his place.

This development shouldn’t come as much of a surprise to anyone who has been with Warrior since the beginning, but it’s cool that “If You Wait by the River Long Enough…” actually committed to it. You’ll notice, too, that Father Jun is kept alive rather than killed or made to commit ritual suicide, which is ordinarily how such leadership changes occur. The show evidently still has a use for the older man, though in what capacity is left unclear in Warrior season 2, episode 7.

If this was a rather expected development, you can’t say the same for Ah Toy’s relationship with Nellie, which seemed to come out of nowhere in the first place and continues here, doubling up as a good excuse for Ah Toy to deliver some of her backstory. It’s typical of the period’s disgraceful treatment of both women and the Chinese – on her way to America with her husband she was forced to become a concubine, and she owns land that she can’t claim ownership of because of her heritage. Nellie has her own problems with a group of sex traffickers operating out of a rival brothel, and I think we know where this is going. 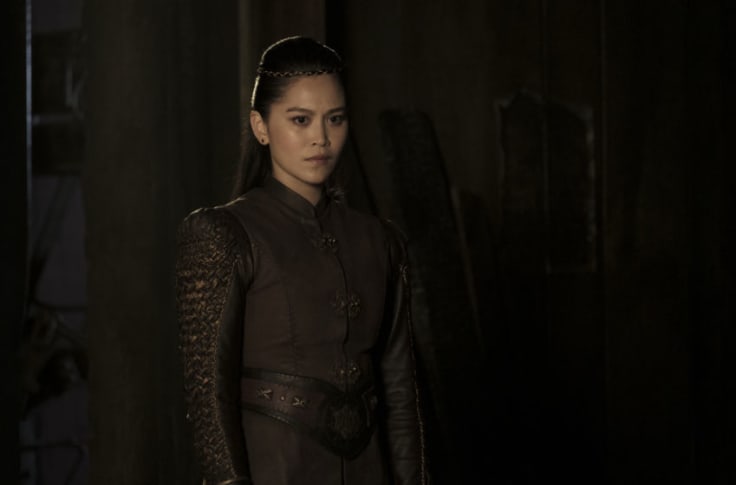 Thus, Ah Toy and Lai raid the brothel and spring the captive women, which also accounts for one of the major fight sequences in Warrior season 2, episode 7, shot very artfully and vaguely femininely, I think, though it very much raises the issue of Lai perhaps being a bit too into the whole pastime of vigilante murder than seems reasonable. She’s left with the other women at Nellie’s winery.

The timing of this whole thing is important, since Zing has just been framed for the sword murders and, in “If You Wait by the River Long Enough…”, is sentenced to hang by his neck until dead at San Quentin. O’Hara testifies, and uses that fact as an excuse for the rumour Leary heard about him being on the take – he was “undercover”, essentially, or at least that’s what he’d like people to believe. Leary remains an interesting wildcard in this whole thing, since he’s handy in a fight, willing to go the extra mile for political ends, and would prove a valuable political ally by being able to sway the Irish vote, which doesn’t go unremarked upon by either Buckley or Sophie.

You definitely get the sense of a much bigger picture coming into focus here, with a lot of players and moving parts being shifted into position. Everyone knows something, or several things, but not quite enough; Ah Sahm, for instance, knows that Zing has been falsely convicted of the sword killings with the help of Chao, and so does O’Hara, which is why, when the bodies Ah Toy and Lai left behind are discovered, the cops clean up the evidence to make Zing’s conviction stick.

But the biggest developments of Warrior season 2, episode 7 occur in the relationship between Penny, Sophie, and Mayor Blake, the latter of whom is taunted because of his wife’s use of Chinese labour and later gets very drunk and confronts her about making deals behind his back, with his attacks starting out as verbal but quickly becoming physical. Blake’s a pathetic figure in this sequence, only able to overpower Penny because he’s too fat for her to move, but nonetheless, he gets the best of her despite Sophie’s interference and begins choking her to death.

It’s Jacob, of all people, who saves the day, stoving the back of Blake’s head in with a fireplace poker. This is a long-overdue fate for a deeply unpleasant character meted out by the right characters at the right time. You have to wonder, though, what the consequences of it might be.

Thanks for reading our recap of Warrior season 2, episode 7, “If You Wait by the River Long Enough…”. For more recaps, reviews, and original features covering the world of entertainment, why not follow us on Twitter and like our Facebook page?