“Chapter 13: The Jedi” is fan-service done right, with a satisfying debut for one fan-favorite character, a namedrop tease for another, and more explanation of the overarching story. The Force is strong with The Mandalorian.

“Chapter 13: The Jedi” is fan-service done right, with a satisfying debut for one fan-favorite character, a namedrop tease for another, and more explanation of the overarching story. The Force is strong with The Mandalorian.


This recap of The Mandalorian season 2, episode 5, “Chapter 13: The Jedi”, contains spoilers. You can check out our thoughts on the previous episode by clicking these words.

After all the build-up to Ahsoka Tano’s live-action debut, “Chapter 13: The Jedi” wastes absolutely no time in presenting Rosario Dawson’s take to an eager audience. And it’s perfect. She looks great, she has the iconic dual white lightsabers, and despite many years of close association with the voice of Ashley Eckstein, it doesn’t take long to totally buy into Dawson’s version of Ahsoka.

And it’s easier still to buy into her fracas with a local magistrate, Morgan Elspeth (Diana Lee Inosanto), who is ruling her people with an iron fist, publicly torturing the citizens and remaining quiet about her Imperial bossman, whose identity Ahsoka is keen to uncover. Mando and Baby Yoda arrive on Corvus and step right into the middle of this conflict, roaming the place and taking account of its distinct samurai vibes as they try and pick up a lead on the Jedi.

Luckily, Morgan being plagued by Ashoka gives Mando an opportunity, since she hires him to kill her, with a pure beskar steel staff being offered as payment. The coordinates she gives him lead him out into the foggy woods, where Ahsoka jumps him and a little disagreement ensues until he gets a second to reveal he was sent by Bo-Katan to find her. If you thought “Chapter 13: The Jedi” was going to be solely devoted to Ahsoka, you’ll be surprised to learn that it also delivers a wealth of information about Baby Yoda, or the Child, or Grogu, which turns out to be his real name, communicated to Ahsoka through the Force. Will I stop calling him Baby Yoda? I think I might have to. Either way, she gives Mando a quick primer on the Force and explains to him that Grogu — ugh, doesn’t feel right — was raised in the Jedi Temple on Coruscant and trained by many masters until the rise of the Empire after the Clone Wars, at which point someone took him from the temple and hid him. His memory is dark from there. 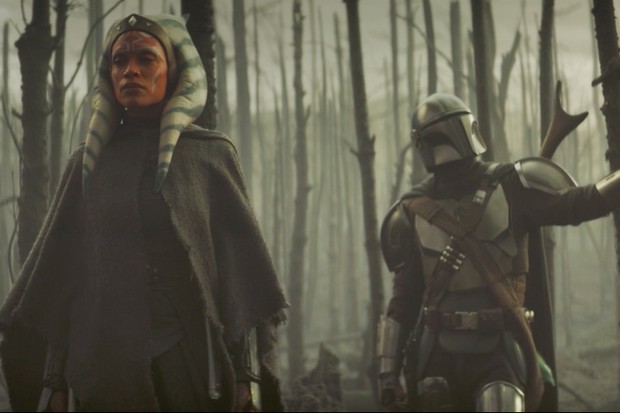 The next morning, she tests his powers, but he’s stubborn and reluctant, having hidden his abilities in order to survive. He’s much more inclined to do what Mando says, though, and she gets him to try and coach Grogu instead, enticing him with the little component he took from the Razor Crest. Ahsoka, seeing this, says she can’t train Grogu because of his connection to Mando — it makes him too vulnerable to his feelings, and she has seen what can happen to even the strongest Jedi Knights when they give in to their anger and fear. Who could the former apprentice of Anakin Skywalker possibly be talking about?

Nevertheless, Mando has a mission to complete, and after letting on that the magistrate hired him to kill her, he offers to help Ahsoka take her down in exchange for her training Grogu. They’ll never see a Jedi and a Mandalorian tag-team coming, with galactic history being what it is. Thus, we get our requisite infiltration action scene, with Ahsoka confronting the magistrate head-on and Mando arriving in the nick of time to save the prisoners she orders to be executed. Ahsoka squares off with Morgan while Mando stands toe-to-toe with her hired gun, Lang (Michael Biehn), who listens to the dual and, after hearing Ahsoka win it, pretends to lay down his weapon and surrender. Of course, it’s a ruse, but Mando is quicker on the draw. With the magistrate at Ahsoka’s mercy, the Jedi asks her where her master is. And her master? None other than Grand Admiral Thrawn. See? Fan service!

With that bombshell dropped, Ahsoka still insists she can’t train Grogu. She does, though, give Mando another video-game-style quest, this time to go to the planet Tython, to the remains of an ancient temple strong in the Force, and place Grogu on the seeing stone at the top of the mountain. There, he can choose his own path, and if he reaches out through the Force, another Jedi might seek him out. Let’s hope so.

Thanks for reading our recap of The Mandalorian season 2, episode 5, “Chapter 13: The Jedi”. For more recaps, reviews, and original features covering the world of entertainment, why not follow us on Twitter and like our Facebook page?