The Mandalorian Recap: Saving The Best Until Last

“Chapter 8: Redemption” was a near-perfect finale with just the right kind of fan service, capably teeing up a sophomore season.

“Chapter 8: Redemption” was a near-perfect finale with just the right kind of fan service, capably teeing up a sophomore season.

This recap of The Mandalorian Season 1, Episode 8, “Chapter 8: Redemption”, contains spoilers. You can check out our thoughts on the previous episode by clicking these words.

The secret to The Mandalorian — especially in light of The Rise of Skywalker, which was pandering nonsense — is that it understands Star Wars. Not just the extensive lore and continuity, or what remains of it under Disney, but the culture that surrounds it; what fans really want, and that they don’t need to be spoken down to in order to get it. The Mandalorian finale, “Chapter 8: Redemption”, had no shortage of moments that were explicitly designed to please those in the know, but it delivered them in a way that didn’t compromise the story it wanted to tell or the groundwork laid by previous episodes in the season. In so doing it was able to bring several corners of the canon together in a naturalistic way while still delivering the best episode individual episode thus far.

We opened with the Scout Troopers (voiced by Adam Pally and Jason Sudekis) who had seized Baby Yoda in the previous episode’s climax bickering over the infant, ruminating on Moff Gideon’s (Giancarlo Esposito) fearsome reputation and unhinged behavior, and demonstrating their woeful marksmanship. They’re interrupted, though, by IG-11 ( The Mandalorian Episode 8’s director Taika Waititi), who introduces itself as a nurse droid before killing them both and taking Baby Yoda back into safe, metallic hands.

Meanwhile, Mando (Pedro Pascal), Greef Karga (Carl Weathers) and Cara Dune (Gina Carano) are still trapped by the Moff’s forces. Given until nightfall to surrender, Gideon also reveals some telling information. He knows that Mando’s real name is Din Djarin. He knows Cara originally came from Alderaan, the planet annihilated by the Death Star in A New Hope as a display of the superweapon’s power. Greef is a “disgraced magistrate”. Reflecting on how Gideon could know his name, we’re treated to another flashback to Mando’s homeworld being razed by Separatist B2 Super Battle Droids (explaining his aversion to synthetics) until he’s rescued by Mandalorians wearing what looks like the Death Watch logo (I’m not an expert, and it’s been a long time, but it certainly looked a bit like it.)

Over the radio, IG-11 announces he’s fulfilling his base function “to nurse and protect”, and speeds into town — complete with some lovable reaction shots from Baby Yoda — to open fire on Gideon’s stormtroopers. Mando, Greef, and Cara all join the fight, but Mando is badly hurt when Gideon detonates the generator of Mando’s E-Web heavy repeating blaster, as seen on Hoth in The Empire Strikes Back, and everyone is forced to retreat back inside. Mando is seriously wounded and insists he won’t make it, insisting that everyone else leaves to make sure the child is safe. He gives Cara a medallion to present to the Mandalorians as Gideon orders his Flametrooper to burn them out. Cara insists she won’t leave Mando but this, after all, is the way.

Or is it? Baby Yoda, with some help from the Force, redirects the fire, and Cara and Greef escape into the sewers with him. IG-11 remains to help Mando, who initially thinks the droid plans to assassinate him. But IG reiterates that he has been reprogrammed and is now genuinely a nurse droid. To save Mando he needs to remove his helmet in order to apply a bacta concoction, but since no living thing has seen Mando without his helmet since he was a child, he’s reluctant. IG-11, though, reminds him that he’s not a living thing, he’s a droid, so Mando allows his helmet to be removed. And he looks, somewhat unsurprisingly, exactly like Pedro Pascal. 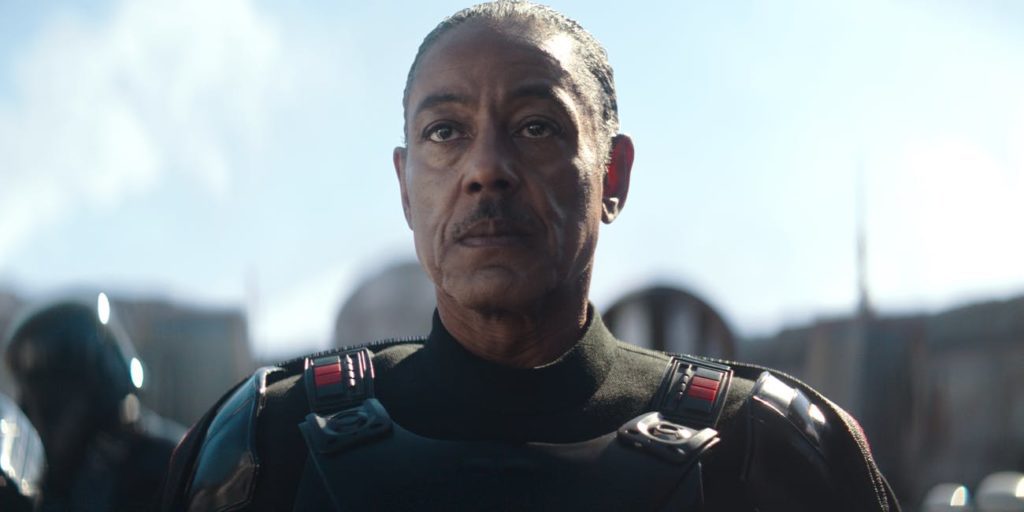 The bacta treatment works, so Mando — now helmeted again — and IG catch up to Cara, Greef, and Baby Yoda, where they find piles of Mandalorian helmets and armor, left behind by Mando’s hidden clan. The Armorer (Emily Swallow) has remained behind to repurpose the beskar, and also to dispense some backstory about the Mandalorian Wars and their conflict with the Jedi, which still remains a point of contention in the current canon given it was most popularly detailed in the Knights of the Old Republic video games, which remain part of the Legends continuity. Regardless, she explains that, given the Mandalorian creed, Baby Yoda is a foundling and thus, until he comes of age or can be reunited with his own people, is Mando’s responsibility. Even if it comes to delivering the child to enemy sorcerers, this is the way. In babysitting the kid, though, Mando has earned his signet, and a jetpack.

The last we see of the Armorer is her taking out a bunch of stormtroopers with her smithing tools. I hope she’s in Season 2.

The Mandalorian Episode 8 doesn’t skimp on typical Star Wars weirdness in its final sequences, as the crew board a raft to navigate the lava flats which is operated by a droid ferryman. Using the thermal vision in his helmet, Mando spots a platoon of stormtroopers flanking the mouth of the tunnel, so IG runs the numbers and determines that there is no scenario in which he survives and the child remains safe. Realizing this, if Mando says that the child will be safe with him, IG can default to his factory programming and self-destruct rather than be captured, which he does after a touching goodbye.

But the danger hasn’t been averted just yet. Gideon himself arrives in a TIE fighter to finish off the heroes, but Mando and his jetpack are able to bring the vessel down. Cara decides to stay with Greef on Navarro, while Mando, after making a cairn for Kuiil, leaves with Baby Yoda on the Razor Crest in search of Jedi.

The final scene of The Mandalorian Season 1, Episode 8 is the one that has everyone talking. In it, Gideon cuts himself free from the TIE wreckage — with the Darksaber, a unique saber created by Tarre Vizsla, the first Mandalorian Jedi, which has a storied history in both The Clone Wars and Rebels. The final shot of The Mandalorian finale is of him stood atop the wreckage wielding it in live-action for the very first time. You see what I was saying about the right kind of fan service?