“Part Two” sees Michael’s attempts at covering up the hit-and-run already begin to backfire as he crosses a point of no return.

“Part Two” sees Michael’s attempts at covering up the hit-and-run already begin to backfire as he crosses a point of no return.


This recap of Your Honor season 1, episode 2, “Part Two”, contains spoilers. You can check out our thoughts on the previous episode by clicking these words.

There’s a particularly pressing matter in “Part Two”, and it’s the car that Adam used to accidentally run down and kill Rocco Baxter, the son, you’ll recall, of New Orleans’ preeminent gangster. The car happens to belong to Adam’s late mother, Robin, so it ties back to the family and contains a wealth of deeply incriminating evidence. The vehicle has to go, and it’s Michael’s first port of call. He finesses a favor and the job of getting rid of the vehicle falls to a young, Black, gang-affiliated man named Kofi (Lamar Johnson).

As we see Jimmy stood over Rocco’s corpse whispering to him, his obvious desire for revenge is juxtaposed with a scene in which Michael takes Adam to Robin’s grave on the anniversary of her death while prepping him to hold his nerve and maintain the alibi that he’s cooking up. The point is obvious. Both clans might have collided already, but they’re on a collision course all the same. When Adam confesses that he thinks he might not be able to do it, Michael tells him, “Yes, you can. We have to, or we die.”

Almost immediately in “Part Two”, though, Michael’s plan backfires. He tries to play off the theft of Robin’s car to Nancy (Amy Landecker) like it’s a good thing, a way to help him through the on-going grieving process, in the hopes of her not investigating it too urgently. But her reaction is quite the opposite of what he intended. She’s determined to track down whoever did this — on the anniversary of Robin’s death, no less! 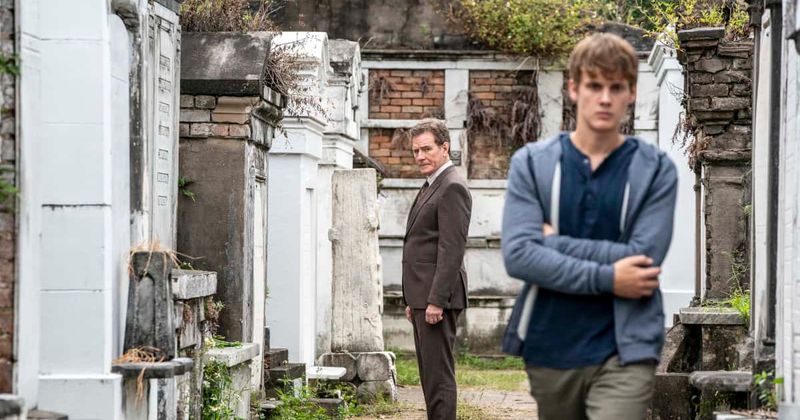 Kofi is, naturally, pulled over by the police in a scene that has an additional frisson of tension since we know what tends to happen when young Black men are pulled over by the police. He’s caught with his GPS set for the scrapyard, leading Nancy to suggest to a very panicked Michael, who goes to retrieve the vehicle, that the convenient timing of the theft might suggest a connection to Robin’s murder.

Of course, the car isn’t the only lingering bit of evidence that proves Adam’s involvement. Jimmy’s people have Adam’s inhaler, which they’re testing for DNA, and Django, the Desiato family dog, keeps trying to grab the bloody garment that’s still under a bit of furniture in the house. Michael’s increasing resolve to get things covered up parallels Jimmy’s increasing instability, most aptly demonstrated in a scene in which he smashes up a birdcage with a golf club (the bird is still in it.)

The hook of Your Honor is that Michael isn’t well-suited to this kind of thing. He’s already being forced to cross lines that he swore he never would, but the funniest way this manifests is in his increasing intolerance for the noble moral fortitude he has built his career on. At one point, as he and Adam are going over Adam’s story, he mentions that a homeless man might have seen him in the car. “What kind of homeless?” asks Michael, obviously meaning would he be too strung-out or unstable to remember the encounter. Now it’s the time for politeness, you understand.

Kofi is eventually arrested for the hit-and-run, which only compounds Adam’s guilt. He’s told by his gang higher-ups to plead guilty, or else his mother and family won’t be protected. In court, his gang tattoo does him no favors — membership of the Desire clique would have probably indicted him regardless of his plea, but it also has the knock-on effect of making Jimmy believe that the attack on Rocco was a gang hit. A street war is on the horizon. That might get Adam temporarily off the hook, but how much blood is going to be on Michael’s conscience before it’s over?

Thanks for reading our recap of Your Honor season 1, episode 2, “Part Two”. For more recaps, reviews, and original features covering the world of entertainment, why not follow us on Twitter and like our Facebook page?