“Arrivals & Departures” proves a satisfying finale, bringing the main arc to a close but leaving lots of potential for a deserved second season.

“Arrivals & Departures” proves a satisfying finale, bringing the main arc to a close but leaving lots of potential for a deserved second season.


This recap of The Flight Attendant season 1, episode 8, “Arrivals & Departures”, contains spoilers. You can check out our thoughts on the previous episode by clicking these words.

There’s a tendency these days for finales to beg networks to pick the next season up, mostly by confusing “leaving things open for a sequel” with “leaving things completely unresolved”. Luckily, “Arrivals & Departures” is very much in the former category. It concludes the main narrative, it gives a satisfying payoff to almost all of the on-going subplots and character arcs, and it lays some ground for a follow-up if HBO Max decides that this first season has been popular enough to justify such a thing – which all available evidence seems to suggest it has.

We begin where we left off, with Cassie and Miranda getting ready to leave for Rome, hoping to ambush and kill Victor’s enigmatic and psychopathic assassin, Felix, aka Buckley. Before they depart, though, Miranda calls Cecilia to let her know that she’ll be made to pay for obviously being the one to tip off Victor that Miranda was still in New York. Panicking, Cecilia attempts to buy her safety by giving Miranda the time and location that Victor will meet his driver, providing an opportunity to take out not just the monkey but the organ grinder as well.

The FBI, meanwhile, is closing in. Van and Kim get the word that the bloody fingerprints inside the broken bottle are Cassie’s, which Van thinks proves his theory, but Kim still believes there’s more to the story. They also learn that Agent Chavez was dumped in an alley with his throat slashed, raising the stakes of the investigation higher still.

Using Cecilia’s tip-off, Miranda is able to ambush Victor and hold him at gunpoint. Their conversation reveals that Felix had gotten a bit slash-happy during his encounter with Alex, killing him before confirming the location of the account numbers and encryptions, which were of course in the copy of Crime and Punishment that Cassie had taken. I can’t help but wish we’d seen more of Victor throughout this season, or perhaps that he’d been left alive, but alas, he draws his gun on Miranda and she’s forced to fatally shoot him, although he does manage to nick her in the leg. 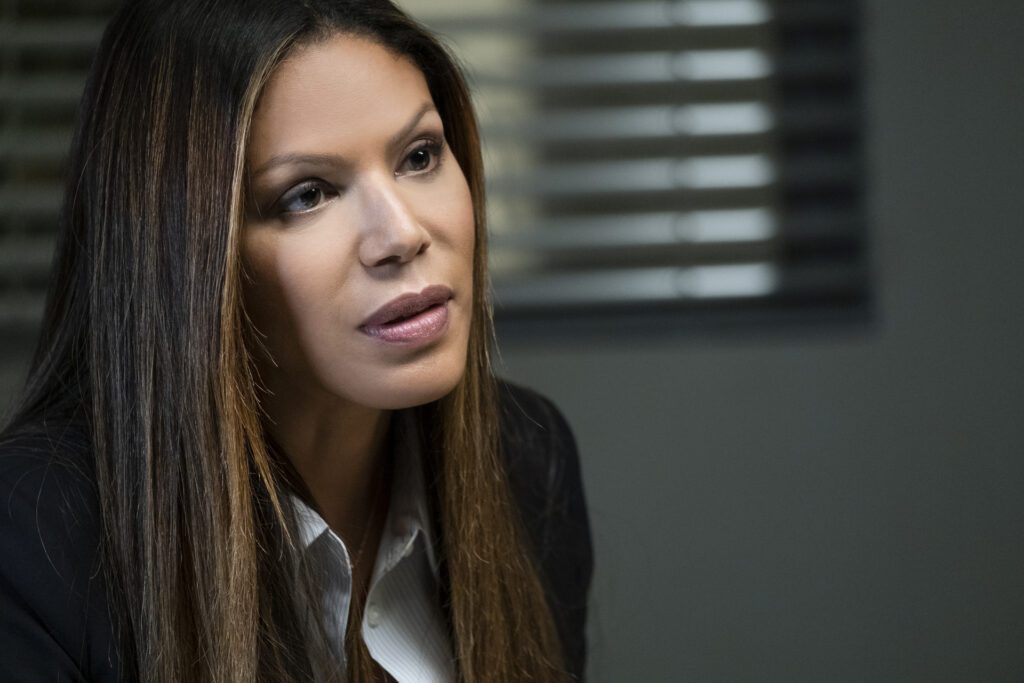 That leaves Felix, and thanks to the delay in going after Victor and the obvious wound Miranda has when she finally arrives at the airport, Cassie is left to deal with him alone. She first encounters him in the airport and fakes that he’s attacking her to buy herself time to get to the hotel. Meanwhile, Miranda catches another flight and Annie provides Kim with a treasure trove of incriminating evidence and also recognizes Buckley on the hotel security footage from Bangkok, confirming he’s obviously not who he says. Everyone is converging on Rome in “Arrivals & Departures”.

Cassie, though, is already there, and with the help of Enrico is able to acquire a gun for protection that also prompts more flashbacks to the car crash that killed her father. Cuoco once again delivers great work in a scene in which Cassie comforts her guilt-ridden younger self, telling her how this incident won’t define her for the rest of her life. Miranda has also made it to Rome and actually runs into Felix before Cassie does, fighting him in the hotel elevator. Miranda still rules, but the next Cassie sees of her, she’s looking a little worse for wear in her hotel room bathtub, with Felix standing over her waiting to ambush his real target. Another fight ensues, during which Enrico gets stabbed and Felix gets shot, first by Cassie and then by, of all people, Shane, who arrives out of nowhere to save the day.

Shane, it turns out, is an undercover CIA agent who has been spying on Megan after her treasonous sales of proprietary technology to the North Korean government – and you thought flight attendants just told you where the exits were! Megan’s on the run and is one of the few characters who doesn’t get an ending in “Arrivals & Departures”. In fact, she’s one of the main threads that one imagines a second season would tug on. She leaves behind some cash, a note, and a flash drive for her son and husband, promising she’ll fix what she’s done.

I say this is “one” of the main threads. Another is Miranda, who Shane tells Cassie wasn’t in the bathtub after the fight, meaning she’s still alive. We get confirmation of this after Cassie has touchingly made amends with both Davey and Annie, when she finds the copy of Crime and Punishment in her coat pocket, a couple of important pages removed and replaced with a note from Miranda claiming she’ll see Cassie soon. But most tantalizing of all might be a brief conversation Cassie has with Shane once she returns to work and finds him on the same flight. Could a position at the CIA be in her future? Hopefully, we’ll get a second season to find out.

Thanks for reading our thoughts on The Flight Attendant season 1, episode 8, “Arrivals & Departures”. For more recaps, reviews, and original features covering the world of entertainment, why not follow us on Twitter and like our Facebook page?