“Where Death Lives” kills off a major character to set the stakes for the finale, while Talon comes face to face with someone she never thought she’d see again.

“Where Death Lives” kills off a major character to set the stakes for the finale, while Talon comes face to face with someone she never thought she’d see again.


This recap of The Outpost season 3, episode 12, “Where Death Lives”, contains spoilers. You can check out our thoughts on the previous episode by clicking these words.

When Zed, Wren, and Talon arrive in the Plane of Ashes in “Where Death Lives”, the penultimate episode of the season, it’s easy to imagine why nobody wants to live there. It’s a grim place, and its residents don’t seem too friendly. Almost immediately after they arrive, they’re jumped by a particularly frantic one who, conveniently enough, turns out to be Zed’s unstable brother, Corven. Just who they need! He’s very angry at Zed, it seems, but also still besotted with Wren, so her coming along was a good idea after all.

These shenanigans share space with what’s going on back at the Outpost, though things aren’t looking good in either location. Munt has staggered his way back to the gates, but his infection means he can’t come in, which is news that Janzo is hardly thrilled to reveal. Yavalla and her troops are stationed outside, waiting, but as she explains, the invasion has already begun. To make her point clear, we see the kinj being passed around inside.

Even among all this, there’s still time for some relationship drama. Tobin tells Gwynn that Falista has agreed to let him keep her army but release him from their marriage, which should be good news, but her selflessness caused his old feelings for her to flood back and he has decided to stay with her. I’m not sure he means a word of this, but here we are, and by the end of “Where Death Lives” it won’t matter anyway. 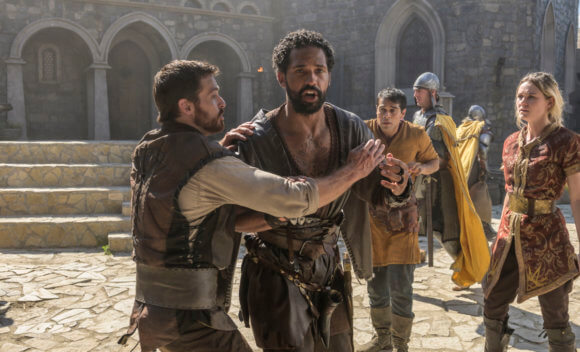 Speaking of which, Corven is insistent that death lives in the tunnel system of the Plane of Ashes, which is exactly where they need to go. Corven will only agree to take them if Wren promises not to enter, but Zed and Talon are free to do what they like. Wren agrees to the terms, which she later reneges on, and Corven is forced to venture into the tunnels with them in order to protect her. We also learn that it was Wren who caused Corven’s psychosis in the first place by giving him an infusion of fireworm blood to save his life after a poisoning, not realizing its subsequent effects. Luckily, Zed is very understanding about this.

Back at the Outpost, Janzo clocks that everyone is infected, which leads to several chaotic scenes as Garret and Gwynn fall back to the keep while Tobin and his men try to fight the infected back. Since Falista has the red kinj she can’t be infected, but she is missing, and if the United realize she’s immune they’ll simply kill her. Tobin, understanding this, goes to rescue her, finding her having locked herself in a room after the kinj automatically fought off her attackers.

But the kinj can’t protect Tobin from the knife and two arrows he takes during their escape, and for the first time in what feels like ages, we lose a major character. Tobin’s dying wish is for Falista to use her power to protect the queen, which should give her something to do going forwards. A heroic self-sacrifice in the finale? We’ll have to wait and see.

And that isn’t all, since in the Plane of Ashes, the gang finds the body of Talon’s father, impaled by many spears. But he has barely even decomposed, and we soon find out why — he’s alive. Surely all this can’t be wrapped up in just one remaining episode?

Thanks for reading our recap of The Outpost season 3, episode 12, “Where Death Lives”. For more recaps, reviews, and original features covering the world of entertainment, why not follow us on Twitter and like our Facebook page?