“Violence is Futile” proved an action-packed and surprisingly moving finale, teeing up another season in the process.

“Violence is Futile” proved an action-packed and surprisingly moving finale, teeing up another season in the process.


This recap of The Outpost season 3, episode 13, “Violence is Futile” (ending explained) contains spoilers. You can check out our thoughts on the previous episode by clicking these words.

It’s kind of amazing how far The Outpost has come, at least for me. For all of the first season and most of the second, I hated it and took great pleasure in ridiculing it, much to the annoyance of several dedicated fans. But they were obviously onto something. “Violence is Futile”, the third season finale, was a very solid episode of television by virtually any metric, and the show has long-since stopped being a guilty pleasure and started being a pleasure, period.

There are still flaws, obviously, but the strong characterization, interesting worldbuilding, and solid plotting have kept everything ticking along while the production values and choreography have gradually caught up. The CGI is still a bit wonky, but it isn’t as overused as it once was. Suddenly, the prospect of a fourth season, which is virtually guaranteed at this point, seems like a very enticing prospect.

But anyway, here’s what happened. “Violence is Futile” opens with a four-months-earlier flashback to give a little context for the predicament we found Talon’s father Saivek in last week. In attempting to wrest the box from his control, almost all of Yavalla’s soldiers were killed by Saivek until they were eventually able to impale him with tridents. A surviving Corven was bitten by a snake while retrieving the box and left behind, and Yavalla, despite Saivek’s warnings of a curse and death being the only possible outcome, took the white kinj for herself.

Since then, the black kinj has been keeping Saivek alive, which he explains to Talon as she and Zed pull out the tridents securing him to the ground. He has no idea that Talon is his daughter until she reveals the fact, and credit to a guest-starring Richard Lintern, his face almost obscured behind a giant beard, for really selling the moment. He’s great all throughout the episode, as he and Talon gradually bond, telling each other how their lives have been since their parting — his story is rather short, obviously — and figuring out what to do about Yavalla. As Saivek explains, anything he touches dies, as does anything inside them — including kinjes. But he’s too weak to move currently, and he refuses to pass the kinj on to someone else since when the white and black kinjes meet, both hosts will die. Quite a pickle. Eventually, after sending Zed and Wren to get him water from a spring — mostly to give him some alone time with Talon — he recovers enough to do the deed himself, and ventures with them through a portal that Talon opens. We’ll catch back up with this in a minute.

In the meantime, the situation in the Outpost itself is looking dire. Falista is still devastated about Tobin’s death, especially since his dying words seem to suggest he really did love Gwynn and not her, but Gwynn helps to put her mind at ease. Through Munt, who seems to have had a haircut, Yavalla implores those hiding behind the barricade to submit to the United and spare any further violence, which obviously nobody is down with. Gwynn, having been United and knowing that Yavalla requires strength in numbers and won’t be keen to lose too many of her troops, calls her bluff. She riles her troops up, but behind closed doors, she tells Garret that they can’t win this fight. She lied for their own sake. 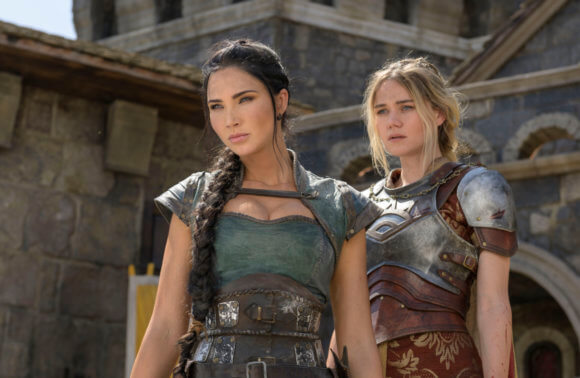 With a keen sense of timing, Yavalla orders the first wave of her attack. Garret coordinates the defensive efforts and even Gwynn and Janzo get involved, proving the stakes are higher than usual. As the barricade breaks down, Falista’s kinj kicks in to help them stem the tide, and there’s a big momentous moment as she figures out how to control it… and is then shot in the stomach with an arrow. Oops. With her bleeding out and her kinj being integral to the counter-attack, Janzo has to book it to the brewery in order to retrieve some life-saving curatives, where he finds Munt dopily talking to a portrait of their mother. As Janzo sneaks into the cellar, we see Munt’s head snap towards him.

That little detail pays off in the next scene when Janzo returns with the supplies. Honestly, for a second I thought that The Outpost season 3, episode 13 simply wasn’t going to pay this off and was going to imply that Janzo had snuck back out without being seen, but when he bends down to minister to Falista and Gwynn and Garret turn away to conspire, he gleefully smashes her head in with a rock. Anand Desai-Barochia’s bizarre performance as Janzo, which I’ve never much cared for, suddenly makes sense when he’s cast for a second in the villain role here. His demented expression is actually kind of terrifying. Anyway, once Yavalla realizes that the red kinj is out of action, she orders the next wave of the attack.

This is the point when the Talon, Zed, Wren, and Saivek arrive through the portal, and everyone gets involved in the fight, at which point things go a bit bonkers. Garret gets infected and starts a rather well-choreographed fight with Zed; Yavalla, spotting Saivek, summons her Lu-Qiri, which impales Saivek in the throne room and starts a fight with Talon (and eventually Xaba), and Janzo is able to infect Wren just as she’s rejecting Yavalla’s efforts and threatening to commit suicide.

With Xaba having fought off Yavalla’s Lu-Qiri, Talon and Gwynn work together to try and free Saivek, but they’re unable to. He needs to pass the black kinj on, but since Talon can’t accept it because of her own, Gwynn makes an executive decision and grabs his hand, accepting the kinj and with it the responsibility of noble suicide in order to take down Yavalla. It’s a tearful moment, this, as Gwynn and Talon have a friendly goodbye, both realizing what needs to be done. Outside, while Yavalla is prematurely claiming victory, the girls hack their way through the United until Gwynn is able to get her Arya Stark moment, leaping through the air and landing astride Yavalla, with the parting words, “You lose, Yavalla. Die, you witch.” And just like that, both of them disintegrate.

In the aftermath of this, the United are all cured. Falista is revealed to be alive, which is disappointing since I’d have liked to see Janzo grappling with the guilt of killing her going forwards. Everyone, including Garret, Zed, and Wren, bends the knee to Talon as their new queen. And as Two and Three look on from a nearby hillside, the black and white kinjes, now united, zoom through the realm to some secret sarcophagi, where they “release the gods”, making for quite the cliffhanger.

I guess I’ll see you for Season 4.

Thanks for reading our recap of The Outpost season 3, episode 13, “Violence is Futile”. For more recaps, reviews, and original features covering the world of entertainment, why not follow us on Twitter and like our Facebook page?