Sleepless Beauty (also known as Ya ne splyu) is a harsh blend of psychological thriller with claustrophobic torture p**n, and the latest feature from Russian director Pavel Khvaleev. Although it wasn’t practical to talk to Pavel, he very kindly answered some questions for me via email, prior to the film’s screening at Grimmfest’s Easter Horror Nights.

I understand you are a DJ at heart and by profession: what led to the move from this to directing your first film The Random?

I started making electronic music at 13, and, when I was 20, my brother and I released our first single on vinyl, on Feed Me Records Portugal label. As a member of MOONBEAM project, which was on TOP-100 best world DJs list of DJ Mag, British musical magazine. In line with music I studied film making, and directing was a kind of my hobby. About ten years ago a friend of mine said: “You are great at making videos, why not try a full-length film?” In 2013 my very first pilot film The Random (of which I am today a bit confused, frankly speaking!) was accepted by none of the international film festivals I’d applied to, all of them rejected it. But I needed this experience to try once again! So, the next film became a hit of genre international film festivals and was noticed by UCM.ONE German distributor. This company made pitching and we signed a 5-year deal with Netflix.

Tell me about the collaborative relationship with your writer, Aleksandra Khvaleeva

Aleksandra and I met in 2008, when we were recording a musical piece, where she was a vocalist. And have been together ever since. We work together on music, videos and films. She develops ideas, and I turn them into reality. I’ve been truly lucky to meet my creative half.

Tell me what your lead actor Polina Davydova had to endure to get into her character.

It was at the stage of script writing that we already knew how it would be to work with Polina Davydova, as we had interacted with her in the film Three, so we were sure, that she would endure the hardest shooting process. And indeed, the process was truly uncomfortable: we literally spent almost two weeks in enclosed space.Starting from the first shooting day Polina slept about 3—4 hours a day and didn’t wash her hair. But her character had much tougher time.

I could find nothing about Erase Me except “brand new music project” on Spotify: is it your musical persona?

Erase Me is an electronic music project in Techno genre. Now I most of the time perform under my own name, Pavel Khvaleev, having released 2 solo albums already. I’ve been always fascinated by experimenting with styles, so I try to create something unique inside the genre of electronic music. I work a lot with vocalists from different countries, so my tracks are easy to comprehend for “inexperienced” audience as well. The main thing here is to touch something inside the person, to get to their emotions with sounds and help in living through difficult times of life.

The animation was remarkable; I’d happily watch that for half an hour. This is the first credit for Jakov Ivanusa on IMDB: how did you find him? And what was the process like to incorporate animation into your live-action film?

We’d come across Jakov’s works shortly before the shooting start, his collages had impressed me greatly — it is a unique format. His works are simply crazy. And when we got to the moment in our script, when the character was demonstrated trash content through VR-glasses, my first thought was about Jakov. And he immediately started to create video collages, picking up each scene and fragment to fit the character, which took him several months. 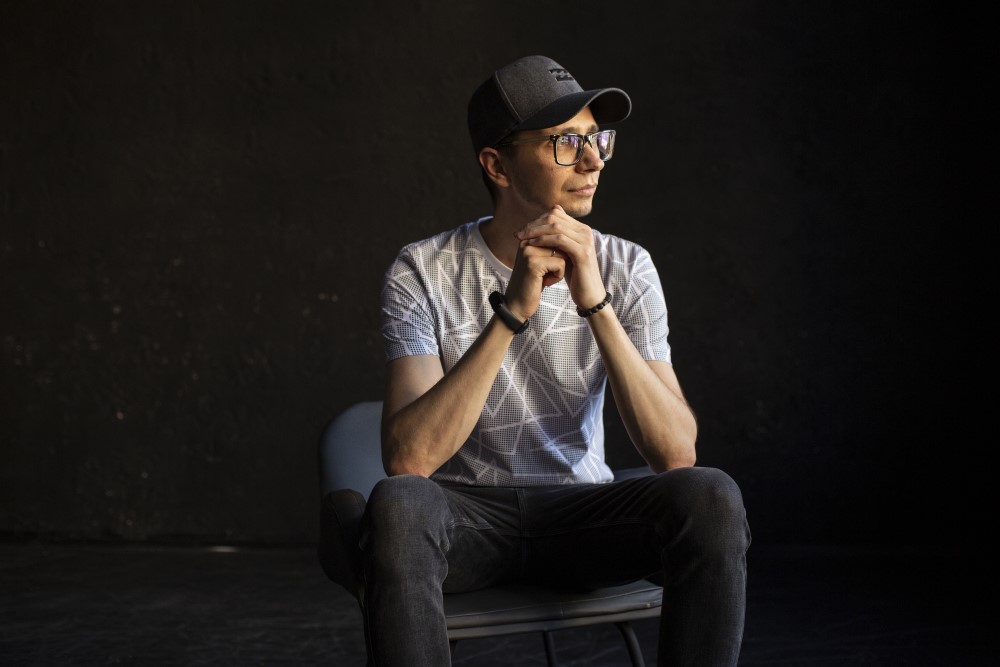 Can you explain the voyeuristic element (the web cam and live commenters)?

It’s not a secret, that modern society has already crossed the line of permissiveness and difference between “not allowed” and “allowed” has been erased for those, who have chosen the dark side of the Internet. What about the desktop format, I simply wanted to try this type of shooting. It’s a feature of our time — to stare at screens, so, when you watch desktop films, an effect of full immersion is created.

Can you tell me about your influences from the world of film?

I admire Tarsem Singh; his films The Fall and The Cell have shaped my idea of visual side in films. As regards atmosphere, the first series of Silent Hill is still what I’m looking up to. Also, South-Korean director Bong Joon-ho is simply the greatest artist!

About this year and what’s next

What has it been like releasing and promoting Sleepless Beauty during the COVID pandemic?

It wasn’t easy, of course, but our producers Michael Kraetzer and Nicolas Onetti from New Zealand have done a fantastic job in 2020, and the film was sold to several countries at once. Naturally, it’s a pity, that the borders are still closed and there is almost no chance to visit the festival in person. We’d hoped to the last, that in October we could get to Spanish première at Sitges festival, but alas.

Can you tell me what you are working on next?

Right now I’m focused on release of my new musical album, and together with Aleksandra Khvaleeva we are also working on several pieces, one of which is based on real events, that have happened in our city.

In a couple of weeks, your UK premiere will take place at Grimmfest: how do you feel about that?

Premières at film festivals are always incredibly exciting and, certainly, it would be great to visit Grimmfest in person to present the film. All our team hope to get Grimmfest audience really scared and make them lose their sleep after viewing.