Line of Duty season 6, episode 2 recap – no more beating around the bush

More tangled loyalties and finger-pointing, another death, and two arrests. Episode 2 shows its time for action.

More tangled loyalties and finger-pointing, another death, and two arrests. Episode 2 shows its time for action.

This recap of Line of Duty season 6, episode 2 contains spoilers.

After last week’s scene-setting season premiere, Line of Duty is now ready for action. I’ll lay it all out here, according to key characters. Let me remind you first, though: there are so many details in this show that I’d like to be excused if I don’t pick up on one which later turns out to be important: I’ve prepared this over a couple of hours, whereas Jed Mercurio had many months. Here goes…

Line of Duty season 6, episode 2 brings back two more characters from previous seasons. Firstly, Ryan Pilkington (Gregory Piper) is shown in the “previously” montage entering his police training. He was an adolescent member of the Organised Crime Group back in Season 1, but never charged with any offense, and so had no difficulty getting into the police. Now, PS Farida Jatri has found the Murder Investigation Team too much and asked for a transfer, and Constable Pilkington has taken her place. At one point in the episode, DI Kate Fleming thinks she recognizes Pilkington, but it’s understandable if she couldn’t place him: he was probably thirteen years old when he was brought in back then. I wonder if DI Ian Buckells will recognize him in a later episode. Interestingly, Pilkington is the one who gives DCI Joanne Davidson a lift near the end of tonight’s episode, and it is not at all clear how well they know each other.

Next, the CHIS (Covert Human Intelligence Source) mentioned in the opening episode and later found dead is given a name: Alastair Oldroyd. The MIT debate possible reasons for his death: jumped or pushed; and if pushed, why? Thing is, a little while later, Carl Banks is also found dead, with no witnesses or CCTV nearby. It looks like he was dead a few days… more later.

AC-12 starts looking into motives for journalist Gail Vella’s death, so as to give them a direction into who might want to cover it up. They visit her producer who talked about controversial reports Vella had recorded, such as narrative about the press conference at the end of Season 5, presented by Deputy Chief Constable Andrea Wise (Elizabeth Rider) and Police and Crime Commissioner Rohan Sindwhani (Ace Bhatti). This led to AC-12 reviewing the evidence taken from her home to hunt down whatever the trigger might have been for her death. All computers in her home were squeaky clean, leading to speculation that they were planted to hide a robbery. The only recording that could be found was a frustratingly cut-short one.

DS Steve Arnott is now a Temporary Detective Inspector, a promotion which Superintendent Ted Hastings says he is awarding him for his loyalty. Almost straight away, he reads an email from his friend DI Nicola Rogerson saying her boss is interested in talking to him about a transfer to Serious and Organised Crime. Did Hastings know about this? Arnott is clearly more than a little torn. He’s still torn in relation to his loyalty to DI Kate Fleming too: he meets her in a subway, bright with street art (yeah, not a dark alley), and tells her that AC-12’s scrutiny of her current boss is imminent.

As soon as Carl Banks’ death crosses AC-12’s radar, they decide to raid MIT: he was, after all, the most likely suspect in Gail Vella’s death, and Davidson’s actions in last week’s episode allowed him to avoid custody. Davidson shocks Hastings with news that DCC Wise has allowed her to lock all information on Operation Lighthouse until a possible leak has been fully investigated. Double-shock: Kate Fleming had given Davidson a heads up that this raid was coming: “Damned if I do, damned if I don’t”, she told Arnott.

Hastings meets with Wise and Sindwhani to complain that these contradictory authorities had made mugs out of AC-12 and given MIT the time to hide or remove evidence of corruption. He is allowed to go into MIT again but advised to think about the politics and allow it to look like a routine performance review. He goes back in, but without much subtlety, delivering to Davidson a Reg 15 demand: she must come in for an interview, to answer for misconduct, gross misconduct, etc.

Now, the second of those returning characters appears: Stephanie Corbett (Amy De Bhrún), widow of John Corbett from Season 5. I’m not entirely clear why Arnott went to visit her, or why he took an interest in her financial position. She seemed more concerned about Arnott’s need for painkillers than anything else. 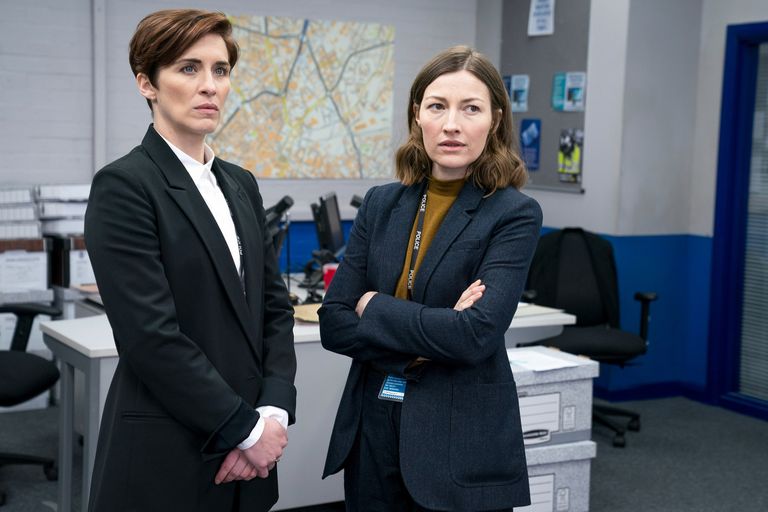 Almost all the rest of Line of Duty season 6, episode 2 belongs to DCI Joanne Davidson. Firstly, there is a scene of warm sympathy between Fleming and Davidson over the Reg 15, ending in talk of meeting up at the weekend. I couldn’t tell whether Fleming was hinting for a date or simply friendly company, but Davidson seemed to take it as a date invitation. Fans seem to be expecting Fleming to head undercover with Davidson; but if she was flirting, there’s more than one reason to do so, especially with a boss. On the other hand, undercover work is her thing, so she may be drawn to that behavior even though she’s not been directed to (as far as we’ve seen). The next we see of Davidson, she is making her way to The Interview.

Naturally, there’s a lot to this interview. DC Chloe Bishop introduces each piece of evidence, Arnott asks questions, Hastings sneers at the answers. They ask how Davidson could possibly have clocked the “getaway” van outside the bookmakers, when on the way to detain their murder suspect: she puts it down to police instinct. They raise issues with the surveillance on the address where the suspect lived and issues with the detention of Terry Boyle. Davidson refused to name the “senior officer” who was responsible for the incorrect surveillance being authorized and agreed with Hastings’ hypothesis of a leak from her team to the OCG. This caught him by surprise but nevertheless arrested her, based on a combination of all these factors: the delay to get to their suspect, the surveillance blunder, and the apparent leaks. She responded by insisting they look closely at the others who knew about the suspect’s confession too, which they did.

Detective Superintendent Ian Buckells was not at all happy to be subject to investigation, but things were worse for Sergeant Farida Jatri when attention turned to her: a cache of burner phones was found in her home and she was brought in for questioning. She revealed to AC-12 that Davidson had been living with her, and hysterically cried that Davidson was framing her. Davidson was released from arrest, driven by young Pilkington to her own car… where she met with a strange bearded man who passed on a phone to her. Davidson ended the episode in her car, distraught.

So what about H? I’d been so on the look-out for clues to that (phantom) person’s connection to the Season 6 story that I even rewound the show at one point, thinking I’d seen a H on Vella’s earring! Writer Mercurio must have known we had that little itch: there was a brief scene just before Davidson’s interview which was presented as though it was nothing to do with anything else in the episode. Bishop came to see Arnott, and talked briefly about the recording he’d obtained from one of Vella’s computers; and she asked him about all the pictures on the wall, including the main players in that conspiracy: DI Matthew Cottan, ACC Derek Hilton, and Senior Legal Counsel Gill Biggeloe. Arnott said the pictures were up because Hastings “refused to let it go”, but claimed that he himself had moved on. Perhaps that ties in with him considering other jobs.

Anyway, I haven’t moved on, and I know other fans haven’t: we want this H mystery cleared up. Maybe next week.