I always find it hard to believe that there are entire TV channels dedicated to Christmas movies. They usually start appearing on my TV guide in October, but surely there aren’t enough films to fill a whole channel for three months? This year I’ve decided that I’m actually going to sit down and watch one of these channels (Christmas 24 – Sky 327, Virgin 419, BT 513) but I’m not going to do this halfheartedly. I am going to watch and review at least one “movie” per week in the run-up to Christmas. If I can stockpile enough of these gems I’ll keep doing this for an entire year. Unless I have some kind of total mental collapse. Pray for me.

Rather you than me. Come on then, hit me: what’s going on in A December Bride?

Layla (Jessica Lowndes) has always dreamed of being a December Bride.

Wait, people actually dream about that?

Apparently so. She seems to be very taken with the idea. Everything is going to plan until her fiancé Jack (Jay Hindle) is introduced to Layla’s cousin, Jessica (Pauline Egan), and of course the two fall in love and get married. It turns out that Jessica and Jack are the absolute worst, as they think it’s appropriate to invite Layla to their wedding. Thankfully, Layla manages to get a fake date for the wedding with Seth (Daniel Lissing), and what starts out as a fake date quickly becomes a fake engagement. There’s also something in there about Seth being an incredibly wealthy workaholic and Layla being a struggling “home stager”, which is (allegedly) someone who is responsible for decorating houses that are for sale. No, I have no idea either.

Of course, Christmas is a time for deception, after all. So is it actually any good?

In a word: no. This is a TV movie, as is pretty much everything on Christmas 24, and it really shows. From the outset it’s apparent that this was filmed at the height of summer and the production crew have just liberally sprayed foam all over the place. The “action” is limited to a few locations that range from Seth’s incredibly expensive but sparsely furnished house to someone else’s house to a church, which was a suspiciously similar size to one of the rooms we saw elsewhere. The director seems to have just learnt how to cut between his actors because the majority of the dialogue scenes have the camera bouncing from one close up to another. It gave me a similar sense of motion sickness to Cloverfield, only far less enjoyable. 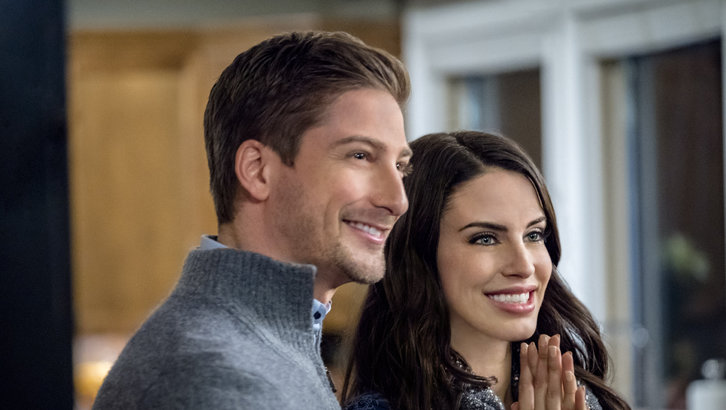 Ok, it didn’t cost a fortune to make, but the budget doesn’t always mean quality. What about the performances?

I think I actually hated every single one of the characters in this film. They’re all horrible people. You’ve got Layla who is manipulative and self-serving; who essentially uses Seth to try and land her dream job decorating houses for some upmarket estate agent. Layla spends a large portion of the film blaming Seth for her break up because he was the person at a party that said, “Oh, Jack, have you met Layla’s cousin Jessica?” Seth is a bit creepy; he’s always fancied Layla but never said anything about it until he’s been pretending to be her fiancé for a number of weeks and has taken every opportunity for a kiss and cuddle to “make it realistic”.

There aren’t really many other characters that get any kind of development, there are just generic stereotypes that drift in and out of shot to drive the plot forwards in some way. For example, we meet Seth’s parents at some point and, shockingly, his Dad is a bit of a d******d who hates Christmas and never spent time with his son. How do I know this? Seth pretty much says that verbatim just before his Dad shows up. I think his Dad is only around to show us why Seth is such a workaholic loner, and so his Dad can understand the true meaning of Christmas and cheer up.

You don’t like the characters then? Well, that’s fine, do they at least have that spark?

Absolutely not. I have seen far more chemistry in a high school French class. They are essentially just two hateful people talking at each other. I can barely believe that Seth and Layla are actual functioning humans, let alone in a relationship.

There must be something positive to say about the film? It’s Christmas after all.

I guess it’s quite a short film at a slick 84 minutes. The other positive that I can think of is that it didn’t actually star any actor that I recognised, so it doesn’t damage my opinion of any beloved actors. I guess that’s a win?

2 thoughts on “Review | A December Bride”